If you’re a passive investor, you better start getting your investments in shape today…

Passive investors buy securities designed to give the same returns as the market. They then hold them for years.

The goal is to duplicate long-term market performance by creating a portfolio that mimics the index it tracks. This can be done with a mix of funds and individual stocks.

If you pick the right securities (like those we own in our Palm Beach Legacy Portfolio), passive investing can be a good strategy.

U.S. stocks have returned over 9% a year for over a century. If you have a well-constructed portfolio, you’d likely beat that.

But if you’re not careful, this strategy could blow up in your face.

That’s especially true for passive investors who own index funds.

As we explained last week, some index funds own stocks that are too expensive… Or don’t otherwise fit the fund’s descriptions.

But that’s not the only reason passive investors should be wary of them… They’re overweight, too.

Here’s what we mean…

So much money has flowed into index funds that they’re now bloated. And that’s created an opportunity for active investors…

That’s why you need to grab your sweatpants and get off the couch. Active investments are poised to outrun the market as a whole… 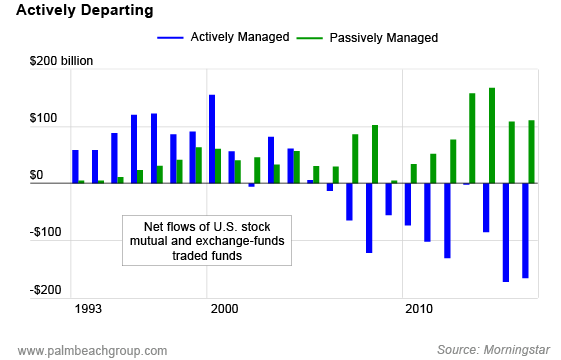 As we told you before, passive funds don’t care whether the stocks they buy are overvalued or undervalued. They just buy whatever is in their index.

This indiscriminate buying creates extra demand for all securities—even bad ones. And when demand increases, the price of the stock will go up regardless of fundamentals.

Time to Cut the Fat From Your Fund

Active funds look for the best companies at the best prices. That requires them to continuously monitor their investments.

But active investing is hated right now. And that’s where our opportunity lies.

A study by PricewaterhouseCoopers forecasts passive investments will manage $22.7 trillion by 2020. That’s over a third of the global market.

Like we said, all this passive money is propping up the prices of bad companies.

Active funds are able to cut expensive stocks from their portfolios. Passive funds can’t… If they did, they’d no longer be “passive.”

If you’re a passive investor, now’s the time to trim some fat from your portfolio. You can do that by riding this cycle…

A trend becomes popular… Investors pile in… The securities get expensive… Then there’s a selloff.

And when the market sells off, active funds usually do better than passive ones.

Investment research firm Morningstar did a major study on active and passive investing. There was no clear winner between the two over the past 30 years.

But the study did find there were sustained periods when one type of investing outperformed the other (see chart below). 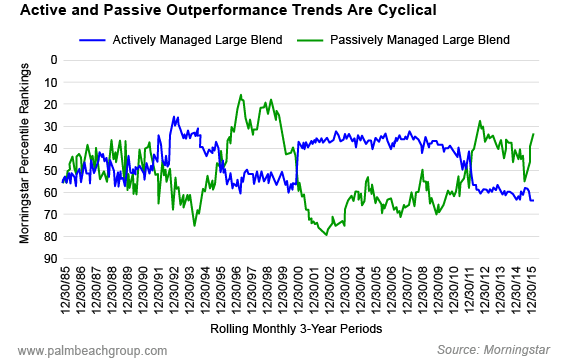 When one form of investing gets too popular, the trend reverses. The unloved one eventually starts getting attention (and money inflows).

We think we’re entering another extended period when active will outperform passive.

If you’re a passive investor, you should review your funds. Then purge the expensive ones. If you still want to own a passive fund, take a look at some undervalued emerging-market indexes.

But if you really want to get your portfolio in shape, you should consider Chris Mayer’s Bonner Private Portfolio.

Chris has been Agora’s top-performing analyst over the past 15 years, averaging over 16% annual returns on safe, conservative value stocks. His stock-picking record is so impressive that longtime PBRG friend Bill Bonner is putting $5 million of his family trust’s money into his recommendations.

After relatively stable prices in 2015, inflation is now climbing to over 2%.

The Federal Reserve tracks inflation via the Consumer Price Index (see chart below). 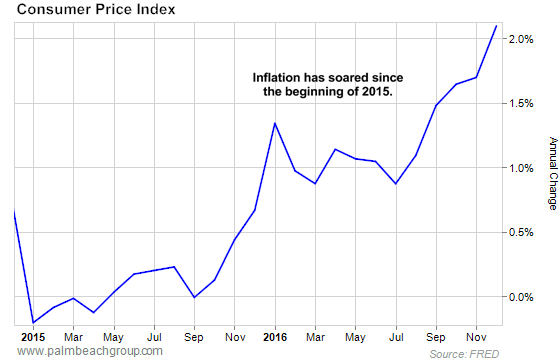 Now that inflation is above the Fed’s 2% target rate, it has the green light to continue raising interest rates.

If rates rise more, that will strengthen the U.S. dollar. And a stronger dollar is bad for U.S. multinationals… It will make their products more expensive overseas.

This is just another obstacle facing S&P 500 companies.

This index is flashing gold

In today’s must-see 3-Minute Market Minder (transcript included), Big T says inflation has lifted gold almost $100 off its December lows. But if you’re holding bonds, you may want to look at your portfolio and consider taking this action…

Populist Uprisings Rattling Markets: The rise of populism is threatening global markets. That’s the word from Ray Dalio. He’s the founder and co-chief investment officer at Bridgewater Associates. Dalio says “populism is the most important issue globally.” Of course, we’ve already been warning Daily readers about this trend.

Farewell, Welfare State: Only about half of 30-year-olds today earn more than their parents did at their age. In other words, this generation has made no financial progress compared to the previous one. And taking just men, the situation is worse… Out of 10 30-year-old men, only four earned more than their fathers in 2014. Longtime PBRG friend Bill Bonner says this trend signals that the welfare state is headed for bankruptcy.

Will a Robot Take Your Job?: Well, not yet. According to a new report, full automation threatens only about 5% of jobs globally. The report says that current technology could potentially automate 60 million U.S. jobs. But given the huge costs required for a mass transition to automation, the process wouldn’t affect all workers at once. So your job should be safe from robots, at least for now. 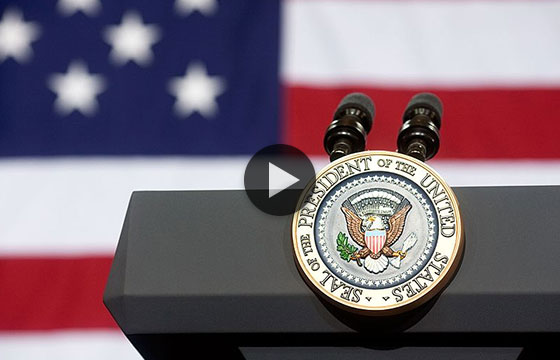