My 9-year-old daughter is a serial entrepreneur…

She’s built her own home. Runs a café. Delivers pizzas in her pink convertible.

And she’s not extraordinary.

My 10-year-old son is also running his own business. So are most of their friends.

These whiz kids are making six or seven figures in their spare time. But they’re not building empires in the physical world. They’re doing it virtually.

The metaverse is a shared virtual environment where we can live, work, and play. But it has tangible real-world implications.

But advances in the internet… artificial intelligence… machine learning… and blockchain… are creating a virtual economy parallel to our real-world economy.

Even if you don’t want anything to do with the metaverse… it’ll have major implications for the real world – including the potential for life-changing gains from its technologies.

From Buzzword to Reality

Since it’s relatively new, the metaverse is a nebulous concept for most people. But it’s catching on.

According to the New York Times, the metaverse is “a variety of virtual experiences, environments, and assets that gained momentum during the online-everything shift of the pandemic. Together, these new technologies hint at what the internet will become next.”

The metaverse encompasses all types of virtual worlds many of us already use… video games… eSports… social media… digital collectibles… cryptocurrencies… and non-fungible tokens (NFTs).

The difference between the metaverse and virtual reality is that the metaverse has direct tie-ins to our “real-world” universe. It’s a modern internet of sorts.

There are even virtual economies built around these games.

One example is Roblox…

My kids use real-world money to buy Roblox’s virtual currency, Robux. (I’ve supplied a few gift cards, so I know.)

They use their Robux to create avatars who interact with places, things, and other avatars. (An avatar is a virtual representation of yourself.)

These avatars can buy and sell real estate and build businesses just like in real life. What’s cool is that if you meet certain requirements… players can cash out their Robux for real dollars.

Roblox has been a big hit. It went public at a valuation of more than $38 billion in March 2021. (That’s bigger than S&P 500 companies like AutoZone, General Mills, and Motorola.)

And the metaverse is becoming a global phenomenon…

For example, some people in the Philippines have quit their day jobs to play Axie Infinity, a popular blockchain game, full-time. They battle for potions, digital tokens with a value of about 20 cents on the market, and sell them for real money.

But this is just the beginning of the metaverse rollout…

I wanted to get the inside scoop on this emerging multitrillion-dollar trend. So, I spoke to top metaverse expert Andrew Steinwold, who founded the investment firm Sfermion.

Here’s what he told me:

It’s already incredible what’s going on in these virtual worlds today. We’re only 1% of the way there.

But going forward, we’re going to be in virtual environments… with lightweight headsets… we’ll shake hands with co-workers (with both people feeling it through haptic gloves)… and our brains will be tricked into thinking that we’re hanging out in the conference room together.

And when you’re playing in these virtual worlds, you might be wearing suits where if you grab your sword or gun, you’ll feel it. And if you’re stabbed or shot in a game, you’ll feel that as well (a slight shock, nothing like the real thing).

It sounds like sci-fi, but this is the direction we’re headed. Throughout history, we’ve designed technology to be fun, inviting, and approachable. And this will be the same. It will feel normal, not spooky.

One area within the metaverse Steinwold is bullish on is NFTs. These digital tokens allow you to trade all types of assets in the metaverse. And you can use them in the real and virtual worlds.

There’s a tremendous amount of growth potential ahead… and we’re only just scratching the surface of what NFTs – and the metaverse – can do.

Major Companies Are Eyeing the Metaverse

Look, I know the metaverse sounds futuristic. But imagine it’s the 1970s, and someone told you about a secret government project called ARPANET.

At the time, only eggheads and geeks used ARPANET. But it was the precursor to today’s internet. The internet has been creating trillions of dollars of value annually for years.

How many people can imagine living in a non-internet world?

Or take cryptocurrencies. If you were around in 2008, when Satoshi Nakotomo wrote his obscure whitepaper on bitcoin (then worth less than 1 cent), you’d probably think it was for nerds and libertarians.

The difference between the metaverse and the internet and blockchain is this: The metaverse will also encompass our real-world economy.

Facebook CEO Mark Zuckerberg is preparing for the metaverse.

You can think about the metaverse as an embodied internet, where instead of just viewing content – you are in it… It’s going to be accessible across all our different computing platforms; VR and AR, but also PC, and also mobile devices and game consoles.

And my hope, if we do this well, I think over the next five years or so, in this next chapter of our company, I think we will effectively transition from people seeing us as primarily being a social media company to being a metaverse company.

Did you catch that?

One of the world’s most well-known companies – and the fifth-largest U.S. company by market cap – plans on becoming a “metaverse” company in five years.

And Facebook isn’t alone. Look at the surge in “metaverse” mentions in recent earnings calls… 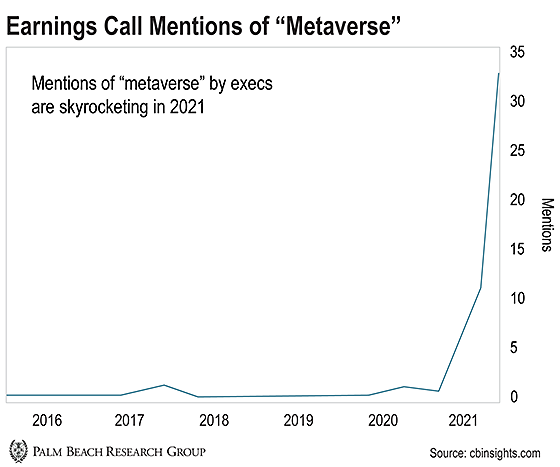 Daily editor Teeka Tiwari says it takes two things to make a fortune from the markets:

Find a massive trend in its early stages and position yourself in the right companies to ride that trend.

That’s the definition of a massive trend. And as I’ve pointed out above, we’re still in its very early stages.

Now, the companies that will dominate this space are in their startup phases. In fact, we’re so early that some of the dominant players in this space may not have been born yet.

But if you want exposure to this trend, consider Big Tech players like Amazon, Google, Facebook, and Roblox. Companies like this will lay the groundwork for the intersection between virtual and real economies.

And if you want broader exposure, consider the Roundhill Ball Metaverse ETF (META). It holds 50 globally-listed companies – like Tencent, Microsoft, and Roblox – actively involved in the metaverse.

If the metaverse is new to you, that’s a good thing. It’s still off the mainstream radar, so you have a chance to get in before the masses.

And remember, you don’t need to bet a lot to make a lot. This is a rare chance to put a small stake into a trillion-dollar trend and potentially see it turn into massive gains.

P.S. If the current trend continues, the metaverse market will be worth nearly $1 trillion in just a few years…

And much of that growth will be tied to a technology that Teeka predicts will mint nearly 800,000 new millionaires over that same period.

But the reality is that most Americans have no idea about the opportunity before them… or that they can position themselves to profit for as little as $10.

Click here for the full story on what Teeka predicts will be the biggest shift of wealth and power in modern history… and how you can be a part of it.