Nick’s Note: Today, Palm Beach Confidential editor Teeka Tiwari shares the story of a couple he met who became millionaires by trading cryptocurrencies. Their secret to becoming wealthy may surprise you …

LONDON—David and Sophia are living the dream…

They wake up to sunlight streaming into their luxurious $10,000-per-month apartment.

They start their day with a leisurely breakfast on the balcony.

Behind them lies the stunning backdrop of a crystal clear lake framed by snow-capped mountains.

Most don’t achieve the lifestyle that David and Sophia have (names changed to protect their privacy). Those who do usually have to work a lifetime to get it.

This couple did it in six months.

David is 30 and Sophia is 27. Before you dismiss them as just another pair of trust-fund babies, think again.

They are a new breed of the young wealthy.

Their lavish Swiss apartment and financial freedom didn’t come from mommy and daddy. David and Sophia are cryptocurrency traders.

In just six months, this couple has transformed a small grubstake into a net worth of seven figures.

While on a recent trip to London, I sat down with the couple. I wanted to find out how two young adults could achieve so much so quickly.

Luck certainly played a role in their timing… but as I was to find out, their success also hinged on the most unlikely of things.

Instead, I want to share with you how David and Sophia navigated the cryptocurrency roller coaster without jumping off.

What they told me may come as a surprise to you, but I think it’s one of the most important lessons you can learn about investing in this volatile space.

I met David and Sophia at Kiri, one of London’s top sushi restaurants.

Kiri is an oasis of calm tucked away in a hidden corner of London’s busy Mayfair district.

Over plates of sashimi and fragrant black cod, I asked them to tell me their secret for making money in cryptocurrencies.

Their answer wasn’t some sexy algorithm or fancy strategy. In fact, you may be surprised by its simplicity…

“You have to be very rational if you want to make a lot of money in cryptos,” David said.

“We always ask ourselves, ‘Are we being rational?’” Sophia added.

When David looks at you, you get the sense he sees everything about you while showing you nothing about himself.

He’s got one of the best poker faces I’ve ever seen. I was about to find out that was no accident.

“I used to be a professional poker player,” David told me. “You don’t last long in poker if you’re not rational.

“I moved to London from Germany because poker winnings are tax-free here,” he continued. “While in London, I got introduced to crypto trading and I was hooked. Now we live in Switzerland because of the low taxes on crypto profits.”

While David is the trader, Sophia is the coolheaded analyst who studies the cryptocurrency white papers. She has an advanced degree in math.

Despite being well-educated, they told me that formal education has played only a small role in their success.

To them, being “rational” is more important than having a degree.

I asked them what they meant when they said “rational.”

“We always use position sizing. We never put more than 1–3% of our capital into a single idea,” David said.

Even among elite Wall Street traders, this type of emotional discipline is rare. It’s even rarer still to find it in 27- and 30-year-olds.

I asked them for their secret to remaining rational in the face of massive volatility.

They answered at the same time: “Sleep.”

That wasn’t the secret I was hoping for…

Getting a good night’s sleep sounds like the common sense advice your mom would give you.

I certainly didn’t expect to hear it from a pair of millennial millionaires.

It’s an odd “secret.” But David’s not wrong about sleep being the key to staying rational.

Think about the times when you’ve made questionable decisions. How many of those mistakes were made when you were refreshed and well-rested?

David and Sophia aren’t the only wealthy folks who prize rationality.

In a 1998 Fortune magazine article, she commented, “Rationality is the single most important trait in his investment success.”

David and Sophia went on to tell me that the key to getting a great night’s sleep is to eat well and get a little exercise in each day.

Over the years, I’ve trained myself to be rational in the face of market highs and lows. But it doesn’t come naturally. It’s still “work” for me.

That’s why I’m determined to give David and Sophia’s ideas a try.

So for the next 30 days, I’m going to get at least seven hours of sleep each night.

I’ll exercise for at least 30 minutes each day. And hardest of all, I’m going to give up refined sugar, bread, pasta, and rice.

I don’t know if it will make me more rational… but it’ll certainly make me healthier.

If you ever struggle with being rational, why don’t you join me in my 30-day rational challenge?

As far as trades go, this one looks like all upside and no downside.

When the markets are going crazy, are you cool as a cucumber, or do you sweat every price movement? Let me know right here.

P.S. At Palm Beach Confidential, we use rational position sizing to turn tiny grubstakes of a few hundred dollars into tens of thousands.

You can learn more—including how to claim your portion of $1,000,000 in bitcoin we’re giving away—during my free cryptocurrency training seminar on November 2 at 8 p.m. ET/PT. Sign up here.

People were calling the top of the market when the tech-heavy Nasdaq turned down in June.

That’s when it dropped 5%— one of its biggest drops in over a year.

Investors have become so complacent that a 5% drop is enough to get them to freak out.

But these pullbacks are normal.

The PowerShares QQQ ETF (QQQ) tracks the Nasdaq. As you can see in the chart below, it’s back at new record highs. 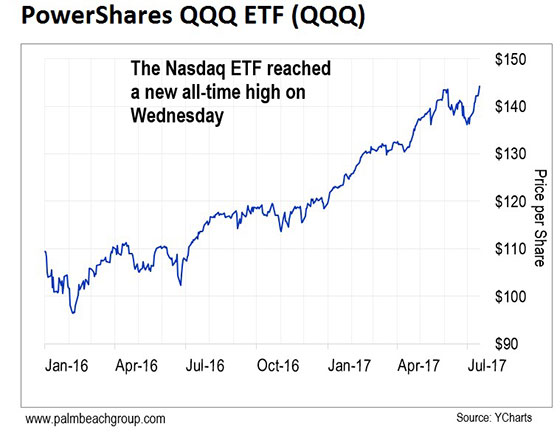 We’re still in a bull market.

Cryptocurrencies are some of the hottest assets right now. Bitcoin has shot up 1,200% in two years. Other smaller cryptos have shot up as much as 20,000% in just over six months.

If you’ve ever wanted to invest in cryptocurrencies, but don’t know where to start, we recommend you keep reading.

Cryptocurrency expert Teeka Tiwari is hosting a free training session on Thursday, November 2. Teeka will show you how he spots only the best crypto plays (while avoiding the worthless ones) during this free event. Sign up right here. 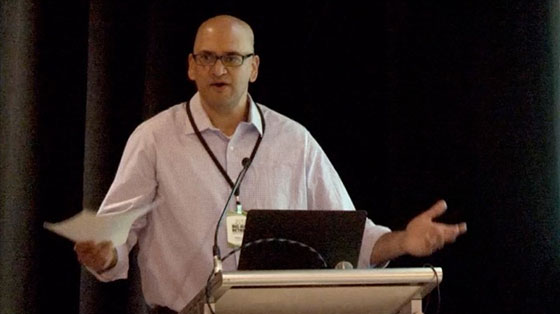