Before Columbus set sail for America…

Before Italy became a country…

And way before the formation of the European Union…

Founded in 1472, the majestic Italian bank stands as the world’s oldest.

It has survived genocides, world wars, and economic depressions…

Through fire, a great flooding, and World Wars I and II… La Rocca—or “the fortress,” as the Italians like to call it—has persevered.

That is, until now…

How Leverage Toppled a 500-Year-Old Institution

Today, Banca Monte dei Paschi is on life support. This past December, the Italian government was forced to bail out the bank for the fifth time.

You see, there’s one thing it couldn’t overcome: too much leverage.

Banks can lend out more money than they have in assets. The Basel Accords (a set of global banking regulations) recommends that banks be levered no more than 33-to-1. For instance, a bank with $1 billion in assets should lend no more than $33 billion.

Having additional leverage increases profitability when things go well… But it magnifies losses when things don’t go as planned.

If a bank is levered at the recommended 33:1 ratio, it would only take 3% of its loans to go bad before equity holders in the bank are completely wiped out.

Some Italian banks are seeing default rates of more than 10 times that.

According to PricewaterhouseCoopers, 22% of Italian loans are classified as non-performing. Not all of them have defaulted yet, but the likelihood of them defaulting is high.

It’s even worse at Banca Monte dei Paschi. The bank’s non-performing loan rate is a staggering 35%.

To keep the bank afloat, Italian regulators threw it a lifeline…

In December, the Italian government agreed to give the bank a 5-billion-euro ($5.4 billion) taxpayer-funded bailout. But even that wasn’t enough to keep the bank solvent. Less than a week later, the bailout was raised to 8.8 billion euros ($9.6 billion).

In the chart below, you can see how poorly they’ve performed over the past 10 years. 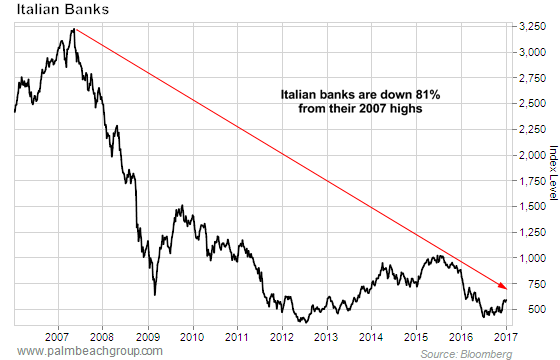 Italian banks are down 81% from their peak in 2007. They would be down even more if the Italian government didn’t just bail out Banca Monte dei Paschi. Expect more bailouts to come.

The Italian banking system is on the verge of collapse. And if it does, the fallout could be widespread.

CDSs are like insurance contracts that pay off when a company defaults on its bond payments. These are the same types of contracts that nearly collapsed the U.S. financial sector in 2008.

If these Italian banks default and can’t make good on their contracts, the contagion will spread across Europe. And from there, the contagion could sail across the Atlantic… where it could blow away 70% of the entire market cap of the S&P 500 financial sector.

As long as the Italian government continues to bail out its banks, most investors should be fine.

But the Italian economy is on the edge of a cliff. If the bailouts stop, that could be enough to send the global financial system tumbling down the hill.

We’ll continue to watch this story.

CHART OF THE DAY

Consumer-staples stocks are getting crushed.

These companies sell things that we need… like food, beverages, and toiletries. They’re supposed to be recession-proof. Even if the economy tanks, we still need to eat, drink, and brush our teeth.

That’s why consumer staples are a good indicator of consumer sentiment.

As you can see in the chart below, the Consumer Staples Select Sector SPDR ETF (XLP) is in a downtrend. 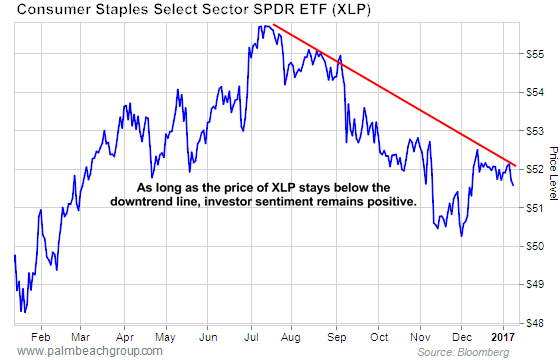 This downtrend suggests that investors are fleeing safe stocks in favor of riskier ones. That means investors are confident in the market going forward.

We’ll know this trend has changed if XLP breaks above its downtrend line (the red line) on the chart above.

This voice-enabled technology will completely change how you use computers

The way humans have interacted with computers has changed over the past half-century.

First, people inserted punch cards into computers to operate them. Later, they typed command lines on a keyboard. Then, along came Windows… and you could use a mouse to click on graphics. Today, nearly everyone has a touchscreen on their smartphones.

But that’s all about to change…

Zero UI uses artificial intelligence (AI) to recognize voice commands and even hand gestures. Big T honed in on this trend during his trip to last weekend’s Consumer Electronics Show (CES) in Las Vegas. In today’s video, Big T explains what Zero UI is… and reveals which company is betting big on the trend.

Pension Tsunami Alert: Combined debt held by U.S. public pension plans will top $1.7 trillion next year. That’s according to a recent report by Moody’s. This tsunami of debt could wash away the retirement savings of millions of Americans. It’s already leveled pension plans in Stockton, California, Puerto Rico, and Detroit.

The Palm Beach Letter team has been following this trend for months. And we’re putting together a special issue to help you prepare for this crisis. PBL subscribers can look for it in their inboxes tomorrow. If you’re a retiree or soon-to-be retired, you won’t want to miss it.

In the LIVE demonstration below, Agora Financial’s Joe Schriefer shows this woman how to generate $127 in INSTANT INCOME from the markets in under three minutes… ARE YOU OUR NEXT MILLIONAIRE NEWSLETTER WRITER?

In today’s Daily, we have a special employment opportunity announcement…

We’re a fast-growing company with all the opportunities of a small startup and the stability of a deep-pocketed firm with a 30-year track record.

We publish more than a dozen advisories covering finance and economics. We have hundreds of thousands of readers around the world. Our business is providing profitable ideas, explaining how the markets really work, and telling great stories.

We’re completely independent and unbiased. We don’t take money from Wall Street or the government. Our revenue comes from selling subscriptions. One by one. Word by word. We offer refunds on all of our products. We make money only if our readers are happy.

You’re a voracious consumer of information. You have a genuine passion for finance, economics (favoring the “classical” or “Austrian” genre), and writing. You’re intensely curious and live and breathe the world’s markets.

You’re a good thinker, a good speaker, and a good writer with great storytelling ability. You can be boring in person, but never in print.

The Job We Need Done

We’re looking for a smart analyst to help write a newsletter and share big ideas with the world. If you’ve ever wanted to make a living reading, thinking, and writing, and meet the criteria above, we’d love to hear from you.

The compensation will depend on your level of experience. Know this… Dozens of analysts in The Agora (our group) who write newsletters earn up to $500,000 annually. Over the years, the company has made millionaires of more than 30 employees.

To start, we’ll need you to relocate to Delray Beach, Florida, where our head office is located. (USA Today calls it the most fun small town in America.)

What to Do Now

Send us a basic resume. We’d like to see where you’ve worked.

Send us an email with the following information…

And don’t forget to attach a basic resume.

Get in touch at [email protected]. Put “Financial Analyst” in the subject line. That’s your first test.