In yesterday’s Daily, we told you the world is entering a new era of “peak globalization.”

Peak globalization happens when global trade reaches a plateau and starts to decline. This trend has coincided with a wave of populist uprisings across the world.

From Donald Trump’s victory to Britain’s exit from the European Union (Brexit), people are saying they’ve had enough of globalization.

We’re not saying that will happen again… But free trade is good for businesses. And protectionist measures will hurt many companies’ bottom lines.

But some companies will likely thrive in this new environment… And if you’re prepared, you could potentially profit from them.

The Losers and Winners of Peak Globalization

In an era of peak globalization, international business will be hardest hit…

S&P 500 companies earn 48% of their revenues from international markets. If they lose just a quarter of that, it will destroy share prices.

On the other hand, small companies do less business abroad. In the small-cap Russell 2000, only 22% of revenue is international. Protectionism won’t hurt these companies nearly as much.

In fact, a trade war could boost their bottom lines…

The U.S. economy is still the largest in the world. With less foreign competition, smaller companies should be able to sell more goods at home.

That’s why the Russell 2000 has outperformed the S&P 500 since the U.S. presidential election in November.

In the chart below, you can see the Russell 2000 has more than doubled the gains of the S&P 500. That includes a 15-day span of consecutive gains right after the election. 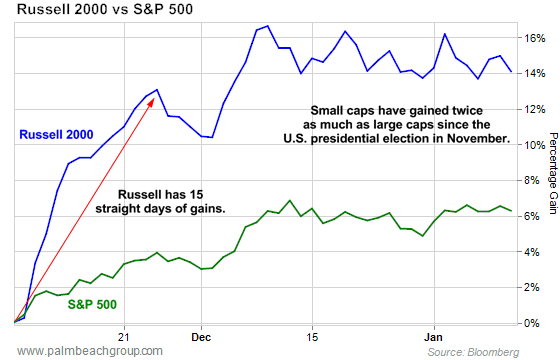 Right now, small-cap stocks are taking a much-needed breather. But even though they’ve rallied hard, there could still be more upside.

Fifteen-day rallies like this are rare. In the 38-year history of the Russell 2000, it’s happened just four other times. All four times, the index was up six months later—averaging a 6.3% return.

Go Back to the Basics

Even within small stocks, some sectors will do better than others.

These industries produce things we need… or, in the case of tobacco, that are addictive. In the investment world, we call it “selling the basics.”

If protectionism becomes the rule—and the world economy contracts—look for small-cap stocks in these “basic” industries to do well.

Not only are pension plans drying up… they’re weighing down the bottom line.

These are companies with pension plans underfunded by more than 15% of their stock market capitalization.

As you can see in the chart below, it gets worse as their total deficits grow… 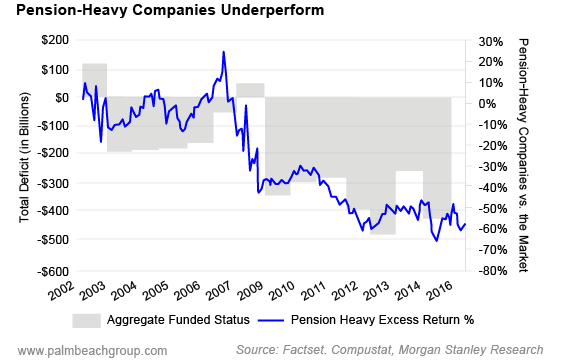 A large pension obligation is a sign that a company may be in trouble.

If you’re on a pension plan, you may want to take a look at our latest issue on America’s pension crisis. (PBL subscribers can access it right here.)

Predicting the Future? Avoid These 10 Mistakes: On Monday, we told you how Wall Street plays a shady little game of “bait and switch” by constantly changing its earnings projections. According to one expert, failed predictions are partly due to these 10 mistakes analysts make. You’d be wise to avoid them, too.

Economy Faces Four Headwinds: One of the country’s largest bond fund managers doesn’t think the economy can get a fresh restart by fiscal policy alone. Higher Treasury rates, a stronger dollar, China’s slowing economy, and troubled European banks could stall the business cycle before it starts. In fact, the investing climate is so risky, he says you should sell the inauguration of Donald Trump…

Dangerous Trend Growing: We may be entering a bizarro investment world. Per Bloomberg, stock exchanges are increasingly getting out of the stock business. Individual shares are no longer the most actively traded securities in the market. That distinction goes to exchange-traded funds (ETFs), which took in a record $400 billion in the past year to become a $3.8 trillion industry. The trendier an investment is, the more dangerous it becomes. We warned you in about this in last Friday’s Daily.

Tom P.: In the January 13 Daily mailbag, you asked if Big Brother banning cryptocurrencies affects my decision to buy them. Yes, it does… It makes me buy as much of them as I can afford… AND in such a way that the fee-grabbing parasites in government can’t trace them.

Anything that government tries to outlaw only makes it much more valuable. Prohibition has never worked for anything. If it did, then there wouldn’t be any prostitution, gambling, or drug abuse after centuries of failed attempts to control them.

Anne: Nice look. The new format is easier to follow.

George S.: I do most of my email reading on my smartphone. It looks like the new Daily is formatted for that type of reader. Thanks!

Timothy S.: Love the new look of the Daily. Reads much easier. 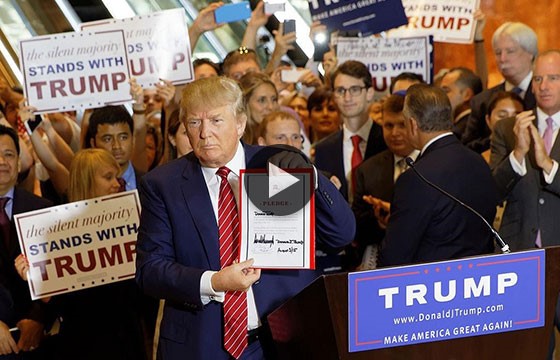