Fear is running rampant in the markets…

The S&P 500 is firmly in correction territory. As I write this, it’s down nearly 10% since the start of the year. The tech-heavy Nasdaq isn’t fairing much better… down 16% from its all-time highs.

Volatility is rocking the crypto markets as well – with bitcoin down 22% from its all-time highs. Meanwhile, the market’s so-called fear gauge, the VIX, is at 36. The last time it was this high was January 2021. Anything above 20 indicates fear in the markets.

We won’t insult you: It’s an ugly picture right now. And you’re probably aware of it.

With inflation running hot and fears of Fed rate hikes on the horizon… volatility could stay elevated – at least in the short term.

If you’re like most investors, it’s hard to keep a long-term view when your portfolio is getting hammered.

But if you pull back the camera, you’ll see that markets always recover over the long term.

Take a look at the chart below. It shows the percentage gains of bitcoin since January 2020. 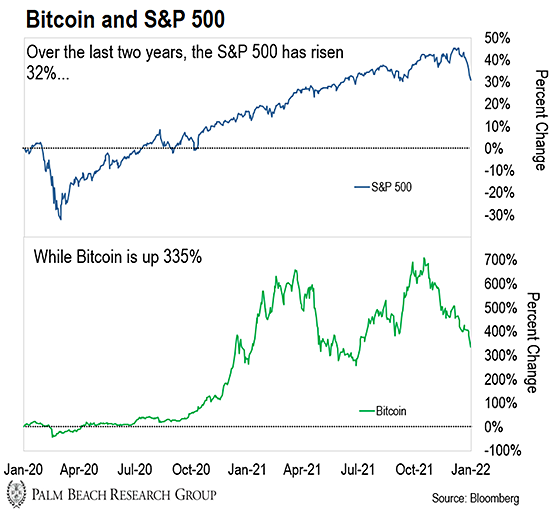 As you can see, bitcoin crashed during the pandemic outbreak in March 2020.

It then rebounded and continued to rise… with bitcoin going on an epic rally… before stalling recently due to recent inflation fears.

The stock market had a similar trajectory over the past two years.

Markets don’t go up in a straight line. And even during epic rallies, we’ll see pullbacks. They’re not fun to go through… But they’re a part of the process.

The median intra-year drawdown in the S&P 500 since 1928 is 13%. So the S&P being down nearly 10% is nothing out of the ordinary. Drawdowns are the norm for stocks and other risk assets, not the exception.

At PBRG, we want to put you in a position to profit regardless of market conditions. So today, I’ll share one of our favorite strategies for beating volatility.

It protects your portfolio during crashes and outperforms during rallies… Plus, it returns over 12x the market over the long term.

If you’re a longtime reader, you’ve probably heard of our “Untouchables” strategy. And right now is the perfect time to consider it.

First, you’ll never want to touch these stocks in your portfolio. And second, nothing can touch their performance.

In other words, they work in any market condition.

Not only do our Untouchable stocks outperform the market over the long term, but they’re also unaffected by extreme drops like the ones we saw when the market ended the year down 37% in 2008 and down 22% in 2002.

To find these exceptional stocks, we studied the two major bear markets over the last two decades…

And we combed through 19,000-plus publicly traded stocks in North America using multiple data subscriptions that cost over $50,000 per year combined.

What was the goal? To find stocks that won’t suffer during significant drawdowns in the market while also easily outperforming over the long term.

In the end, only 13 stocks made the cut.

Take a look at how our strategy performed:

But what about making money over the long run?

As you can see below, the Untouchables not only outperformed the market… they also outperformed investing legends like Warren Buffett, Carl Icahn, and Prem Watsa.

That’s why you’ll never want to touch these stocks.

Don’t Let Volatility Scare You Out of the Market

Since the start of the year, the markets have been bleeding red. It’s enough to scare even seasoned investors.

That may be little comfort during the current bout of volatility. But if history is any guide, we’ll see both the crypto and stock markets race back to all-time highs soon.

Meanwhile, there’s no better time to bulletproof your portfolio with Untouchables.

If you want to find Untouchable stocks yourself, they share five key traits:

Look, we understand the volatility we’re seeing in the markets right now is sending a lot of folks rushing to the exits. But selling off your positions and moving to cash is a mistake you’ll regret.

Over the long term, we’ve seen the value of the dollar continue to fall… while some of the scariest stock market drops have bounced back to hit new highs just a few months later.

This time is no different.

Instead of selling, consider adding some Untouchables to your portfolio. The current environment is creating great, low-cost entry points into solid, well-run companies.

And as history shows, when the market inevitably rebounds, the Untouchables will be some of the strongest performers.