Nick’s Note: Cryptocurrencies and their underlying blockchain technology are leading to a “digital transformation” of society. And that means we’ll see their value explode. My colleague Greg Wilson explains how below…

“I predict the internet will soon go spectacularly supernova and [next year] catastrophically collapse.”

Those were the words of Robert Metcalfe.

Though it may not seem like it, Metcalfe knows what he’s talking about when it comes to technology. He invented the Ethernet computer networking technology… founded computer network company 3Com… and formulated Metcalfe’s law (which states that the bigger the network of users, the greater the value of the network).

He made that prediction in December 1995. But to be fair, the internet was a mess at the time… The Netscape browser was only a year old. There was no Google. And you could lose your internet connection if someone picked up the phone in your house.

But the potential was there. More and more people were starting to use the internet. And with time, the technology improved.

As you can see from the chart below, adoption continues to increase to this day: 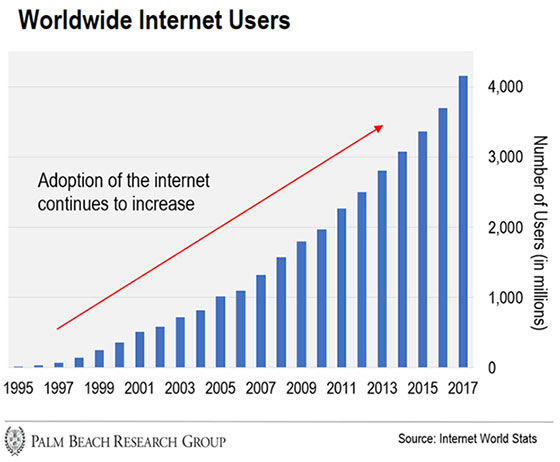 It’s all part of the “digital transformation.”

Definitions vary, but it basically means using digital technology to solve traditional problems. And when it’s done right, digital transformation changes how you operate and deliver value to customers.

Today, we’re seeing the same phenomenon play out in the cryptocurrency space. As the underlying blockchain technology takes off, we’ll see cryptocurrencies explode in value—just as certain internet companies did when their adoption and innovation increased.

The Twin Forces of Progress

When it comes to early stage technology like the internet, we look at two key drivers to gauge the health of an investment: 1) the pace of innovation, and 2) the pace of adoption.

What is important is that it transforms industries.

One of the best examples is Amazon.

It started as an online bookstore in 1994. At the time, it was revolutionary—buying books on the internet was a foreign concept. But Amazon survived, expanded, and innovated.

Among its many innovations was the key addition of Amazon Marketplace in 2002. That enabled third-party sellers to use Amazon’s platform to sell their items online.

As you can see from the chart below, use exploded (as measured by Amazon’s sales)… 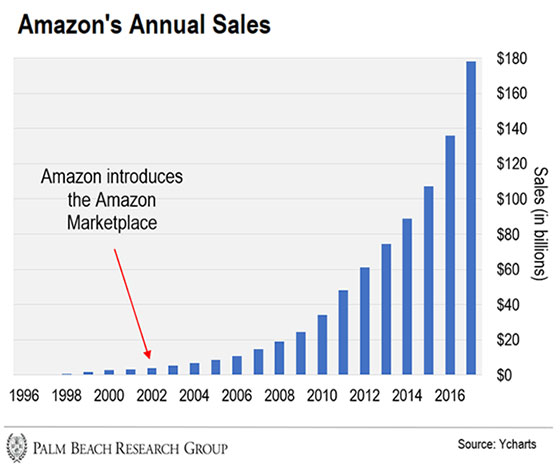 Another great example of digital transformation is Netflix.

Founded in 1997, Netflix let you rent DVDs by mail instead of having to go to the video store. Many didn’t think the concept would survive, including rival Blockbuster. It famously turned down Netflix’s offer to buy it for $50 million in 2000.

Netflix is now worth roughly $150 billion today. And it got there through adoption and innovation…

For Netflix, the key innovation came in 2007, when it started offering content through streaming. With streaming, not only did you not have to go to the video store, you didn’t even have to go to your mailbox.

And as you can see in the chart below, the number of Netflix subscribers has exploded since then… 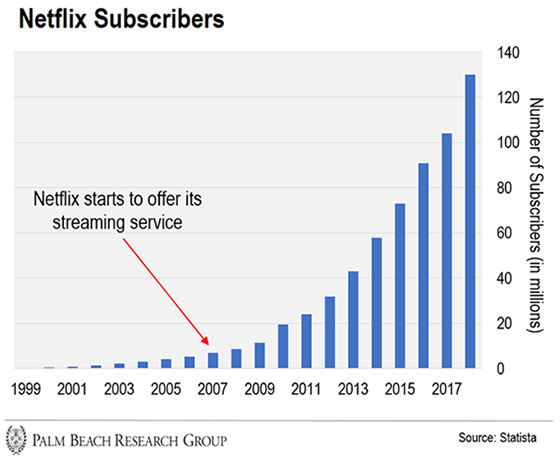 What we see with both examples is adoption and innovation at work. Both companies benefited by making life easier for their users. Amazon made it easier to sell items online, and Netflix made it easier to consume content.

We draw this parallel because the same thing is happening in the cryptocurrency space today. The underlying blockchain technology (the blockchain is simply a “decentralized” network) is rapidly catching on.

Missing the Forest for the Trees

It’s easy to get lost in the onslaught of news in the blockchain and cryptocurrency space.

But when you step back and focus on the key events, a clearer picture emerges…

We’re seeing many events coming together that will bolster adoption and innovation—and send future prices much, much higher:

And those are just three examples. Goldman Sachs, Bank of America, Morgan Stanley, and others have all come out with crypto-related news recently as well.

Notice that I haven’t even mentioned a bitcoin exchange-traded fund (ETF) yet.

The bottom line is the pace of adoption and the pace of innovation in the cryptocurrency space is accelerating.

And the great part is you still have time to take advantage of it today.

The chart below shows the number of users of Blockchain.info’s cryptocurrency wallet over the past seven years: 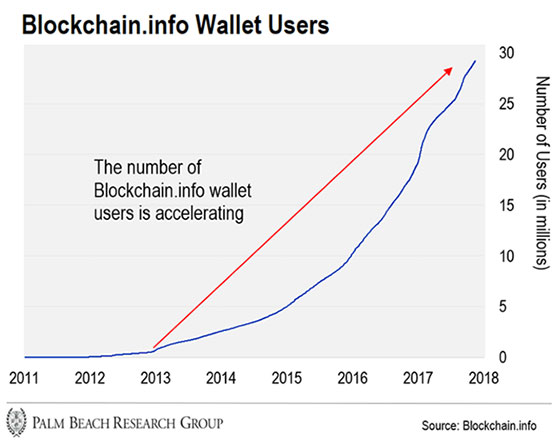 As you can see, even with the crypto bear market this year, adoption continues to increase.

The pace of adoption and the pace of innovation in cryptocurrency is accelerating.

And it won’t be long before the major pain points that have kept institutions and individuals out vanish forever.

But those pain points are your opportunity. That’s why you need to act now and get in before the rush.

Consider buying some bitcoin, the reserve currency of the crypto space. It will benefit as the pace of adoption and innovation accelerates.

And if you already own some bitcoin, you could use this year-long pullback to add to your position.

Just remember, keep your position sizes small. You just need to invest a few hundred dollars for the potential to make life-changing gains from this breakthrough technology.

P.S. We know that the crypto space is still new and confusing to many investors. That’s why Teeka has created our first-ever Crypto Master Course.

Click right here to learn how to register for the course…

Gold is down big this year… But incredibly, we’re now seeing a new form of gold explode in value, over and over again… 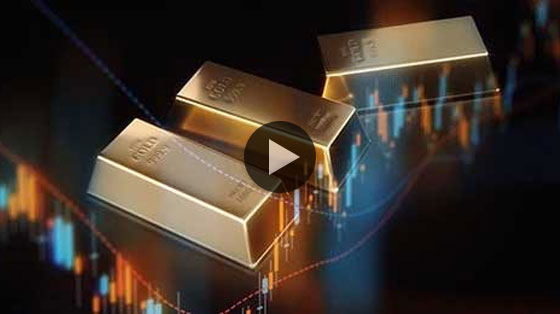