Newsletter writers, journalists, and academics have called it a “Ponzi scheme.”

Others like the idea in theory but have doubts. They are convinced the government will shut down bitcoin and render it worthless.

It looked like a classic “pump and dump” to me. That’s why I ignored it.

But then something very interesting happened.

Instead of collapsing back to pennies, bitcoin found support in the $200 range. Even after the bubble popped, bitcoin was still worth billions.

This intrigued me because true Ponzi schemes have zero value when they crash.

The fact that bitcoin was still attracting buyers even after the onslaught of negative news… an 85% price crash… and universal scorn… said something to me.

It said that maybe this asset had real value. At the very least, it told me that more investigation was needed.

Lessons From the Dot-Com Bubble

But again, something interesting happened…

In the depths of the dot-com hatred, Amazon started quietly climbing in price. Back then, I made the mistake of dismissing this action.

My error was buying into the prevailing belief that dot-com stocks were dumb and worthless.

I listened to the narrative instead of digging deeper into the Amazon story.

That was a mistake of lazy thinking.

So when I saw the same thing happen with bitcoin, I decided to do something different.

Instead of listening to the skeptics, I asked myself: “Why are people still buying this supposedly worthless asset?”

That’s when I did a deep dive into bitcoin.

I traveled all over the world interviewing experts, development teams, and venture capitalists. I wanted to understand why bitcoin had value.

Even Governments Are Embracing Bitcoin

Just as important, I wanted to know what would stop the U.S. government from banning it.

How would the currency outgrow its widespread reputation as a form of “black money” used by criminals?

What I found out was this: At its core, bitcoin is just a way to send and receive value without the need for a trusted middleman.

Bitcoin has no central location. That means no government (including the U.S. government) can ever shut it down.

In fact, several countries have already tried to ban bitcoin and found that it was impossible.

At least two of them (Russia and India) have decided to recognize bitcoin as money.

Governments are realizing that it’s better to have a hand in how bitcoin is shaped and regulated than try to destroy it (which they can’t).

Think back to when the U.S. government finally realized that prohibition was unenforceable. Better to regulate alcohol and tax it.

The real strength of bitcoin is the underlying network of highly secure computers that support it (called the blockchain).

This is where much of the value creation will come from.

As I write, software developers across the world are building applications designed to piggyback off this network.

Over the next three years, we’ll begin to see a slew of new applications emerge for bitcoin and the network that supports it.

They will support everything from asset tracking to recording land registries.

And much more that we can’t even think of yet.

That’s why bitcoin will continue to grow in value.

The next time you find yourself being scared out of owning bitcoin by a negative article, do yourself a favor… Read the last 129 times bitcoin was declared dead.

P.S. Like I mentioned above, I’ve traveled all around the world looking for the most explosive cryptocurrencies out there. And I’ve found three more that have grown an average of 1,183.23%… including one I call the “next bitcoin.”

As the old saying goes, actions speak louder than words. And bitcoin’s action is speaking loudly… 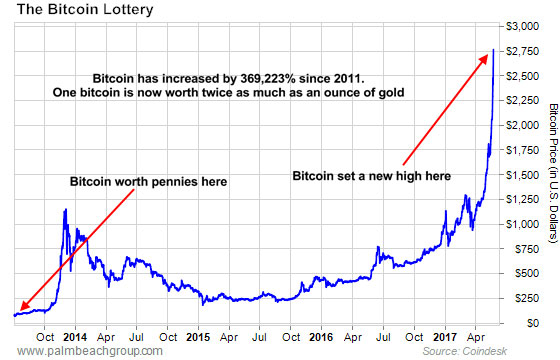 As of this writing, our favorite cryptocurrency set a new high of $2,780 per bitcoin. By comparison, gold was trading around $1,255 per ounce.

That means one bitcoin is now worth more than twice an ounce of gold.

Just think about this…

Our Palm Beach Letter subscribers aren’t doing too badly, either. If you bought in when Teeka recommended bitcoin on April 18, 2016, you’d be up 454.6%.

That would have turned every $100,000 into more than a half-million.

But it’s not too late to make these lottery-winning-type returns. Teeka has found the “next bitcoin.”

Just like bitcoin, the “next bitcoin” has gone from pennies to over $200 in just two years. And there’s still plenty of upside left…

On the same day bitcoin reached its new high, a consortium backing the “next bitcoin” announced the additions of 86 new members, including Merck, Samsung, and Toyota.

Washington Is Warming Up to Cryptocurrencies

Last year, the IRS came after Coinbase, the largest cryptocurrency exchange in the United States. The taxman wanted all of Coinbase’s records to determine if anybody on the exchange was avoiding taxes.

Coinbase is fighting the request. And it may be getting support from some surprising quarters.

Teeka says this may signal that Congress will eventually reclassify bitcoin’s tax status from “property” to “currency.” And that would be “wildly bullish.”

The currency expert who predicted the gold boom of the 1970s, the Savings & Loan collapse of the 1980s, the dot-com and housing crashes, and President Trump’s victory makes a startling prediction about the fate of the U.S. dollar…

It has something to do with a government program he calls “Project FEDcoin.” Click here to watch his urgent warning… 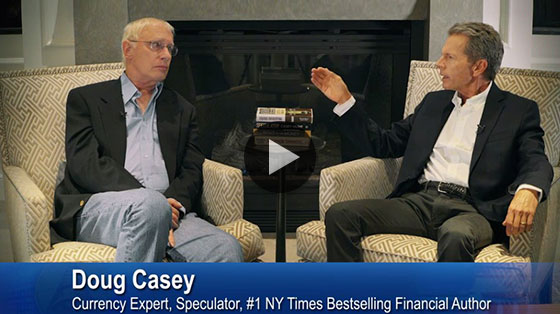