Today, I’m going to share an idea you will most likely hate.

It’s so controversial you may immediately reject it.

Some of you will question whether to continue your subscriptions with us.

Up until recently it was almost universally out of favor with current investor sentiment.

But if you’re a stock investor, it’s the most important idea I will ever put in front of you.

Because the idea I’ll share with you today—if you act on it—could mean the difference between a comfortable retirement versus scraping to make ends meet.

I only request that you keep an open mind while reading this essay so you can examine the facts and reach your own conclusion.

So, what is this controversial subject that we’ll be discussing today?

Simple—it’s a long-term bullish view of the market.

You see, if history is any guide, the market is in the early stages of an 11-year bull market.

An extraordinary amount of wealth will be created. We will see stock market returns that are at least seven times higher than what we’ve seen since 2000.

How do I know this?

I have an indicator that is so reliable, it has foretold market cycles—including booms and busts—decades in advance. It’s predicted every secular bull and bear market since 1920.

And it’s telling us right now that we are on the cusp of a period of massive wealth creation.

I am going to teach you about this indicator today. And I’m going to show you how you can use it to make an absolute killing in the stock market over the next 11 years.

I call my indicator the Golden Ratio. It’s simple to understand—and logically sound.

The Golden Ratio is what happens when the ratio of middle-aged to young people shifts.

When the number of people in the 35–49 age bracket grows larger than the 20–34 age group, it triggers a secular bull market.

We can pinpoint each secular bull and secular bear market over the past century using the Golden Ratio.

Researchers at Yale found that the stock market’s P/E (price-to-earnings) ratio expands by 130% during a Golden Ratio period. 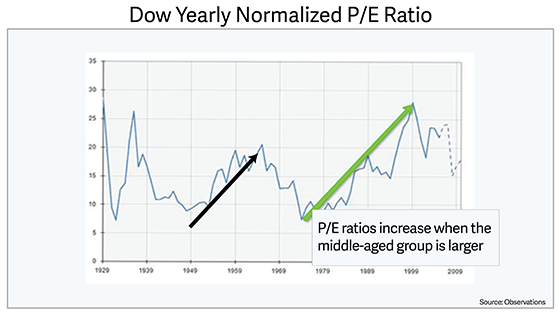 So what’s the force behind the Golden Ratio?

It’s All About Peak Earning Years

Academics have studied the Golden Ratio. They call it the M/Y (middle-aged to young) ratio.

Research teams concluded that stock market returns are highly correlated with people being in their “peak earning years.”

What they discovered was that when people enter the 35- to 49-year-old age bracket, they make more money than at any other time of their lives.

They are buying homes and cars and putting kids through school. Their spending is so meaningful that it causes GDP to rise substantially.

My research team and I dug through GDP data and found that when the 35- to 49-year-old generation is larger than younger generations, its increased spending shows up in larger GDP readings.

When you think about it, this makes perfect sense. We have more people with more money experiencing the biggest expenses of their lives.

This 23% increase in GDP filters down to corporate bottom lines. Corporate earnings explode higher when the ratio is golden.

You can see from the graphic above that corporate earnings boom higher during Golden Ratio periods. All of this increased economic activity causes stock prices to rise.

What Is the Golden Ratio Telling Us Now? 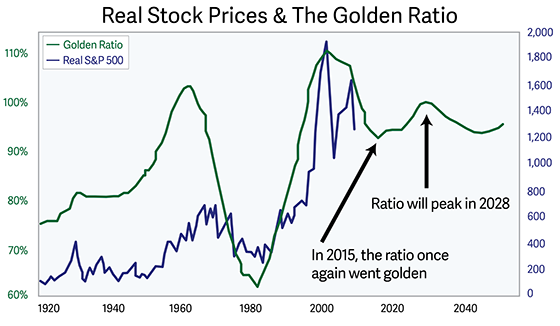 And the ratio is set to stay golden until 2028. That means we will experience a 13-year secular bull market.

From 2015 to 2018, 120 million Americans will transition into their peak earning, spending, and saving years.

When the now-boomers went into their spending years, we had the biggest bull market in history. But this new generation of peak earners could have an even larger economic impact than the boomers did…

How to Invest During a Secular Bull Market

This all means you will make money by consistently investing in the stock market over the next decade. You’ll want to buy during the dips and stand your ground during market pullbacks.

We still have to buy great companies at cheap valuations. That part of investing never changes.

And it doesn’t mean we abandon our risk management strategies, either. We still have to make sure that we are using either a position stop or a specific stop loss.

But so long as we don’t violate our risk-mitigation rules, we want to stay in our investments and let our winners run.

Remember, average annual market gains in a Golden Ratio period are 14.56%. So staying the course is the surest way to success in a secular bull market.

The time to set yourself up to make significant money is now—not 11 years from now.

Let’s go get that money.

P.S. I think this bull market is so early… you could still pocket 30 times your money or more across a handful of plays. The last time we saw a bull market like this, investors had the chance to make extraordinary gains like 1,933%… 3,636%… and 3,954%.

In fact, I think you could see the Dow legitimately touch 60,000 or higher over the next decade. And I’ve put together a free presentation showing all the details.

Today, a monumental event is poised to take place in the heart of the Old World…

And this event could set a series of crises in motion that will lead—unstoppably—to the fall of the European Union.

The crisis set in motion threatens to be more than five times BIGGER than Brexit, and—if you play it right—it promises to be the biggest profit opportunity of your lifetime… 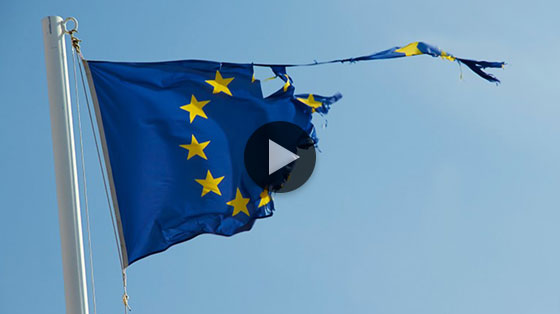