It’s been a breakout year for Dash…

In February, Dash partnered with BlockPay.

BlockPay allows point-of-sale purchases. That means you can spend Dash at select brick-and-mortar stores. BlockPay is available around the world and in 44 languages.

In March, Dash partnered with Wall of Coins.

Wall of Coins allows you to buy Dash through major financial institutions such as Chase Bank and Western Union. That makes it easier for Dash users to exchange cryptocurrency for their local currency.

And in May, Dash teamed up with BlockCypher. This is even bigger news…

The partnership with BlockCypher is a significant step toward mainstream adoption of Dash.

These are just a few of the partnerships Dash has put together in 2017.

At Palm Beach Research Group, we’ve done more research on cryptocurrencies than any other newsletter in the industry.

And after looking at Dash, we think it has the potential to surpass bitcoin as the most widely used cryptocurrency for payments.

Today, I’ll show you why Dash is separating itself from bitcoin to become the king of digital cash.

Dash is a cryptocurrency. Its name is a combination of the words digital and cash. We first mentioned Dash in the Feb. 26 Daily.

Today, Dash has repositioned itself as digital cash. Its developers want to make cryptocurrency payments so easy that Grandma can make them.

Dash has three features that make it a better solution for payments than bitcoin:

Dash’s new partnerships and unique features are paying off…

Transaction volume has grown by five times as well.

And we’re seeing Dash used in real-world cases, too…

It’s an Australian company that allows people to pay bills with cryptocurrencies. You can make utility, rent, credit card, and insurance payments on the website.

(People familiar with cryptocurrencies might recognize the Satoshi name. It refers to Satoshi Nakamoto, the pseudonymous name of bitcoin’s creator.)

And while bitcoin is still the most used, Dash has quickly moved to the second spot.

With all the new partnerships, it’s no surprise that Dash is up 663% for the year.

And it’s just getting started.

But consider this: Revenues for the payment industry are over $1 trillion every year. And they’re expected to hit $2 trillion by 2025.

Regular readers know we’ve written a lot about bitcoin. But there are a number of other cryptocurrencies we like… and Dash is one of them.

That’s why you need to put Dash on your radar today.

P.S. And now, on to a Chart Watch from my colleague Nick Rokke, Palm Beach Daily’s chief analyst.

Just take a look at the chart below. It compares today’s market capitalization of major retailers to their market cap 10 years ago.

And as you can see, Amazon is running away from the pack… 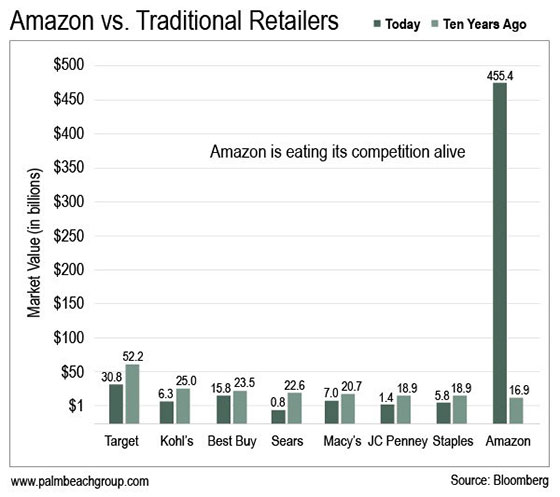 While the market caps of major retailers are getting annihilated, Amazon has taken off.

Look for more companies to get Amazon’d.

Turmoil in the White House is rocking the stock market…

If Trump is impeached or resigns, the entire “Trump trade” (the bet that Trump would lower taxes and boost infrastructure spending) will unravel. But Teeka says right now, that’s all conjecture.

In the meantime, he says the overheated market is taking a breather. So you should see the pullback as a chance to look for bargains rather than run for the bunker.


Editor’s Note: Who do you blame for the sell-off in the stock market? The Trump administration or the Washington establishment and mainstream media? Share your views with us right here…