During the 2016 presidential election, the mainstream media were sizing the White House drapes for Hillary Clinton.

As you can see from the headlines above, the media thought Clinton would be a shoo-in. Most of their polls had her defeating Donald Trump, whom they considered to be politically naïve.

We all know how that turned out…

Trump went on to become the 45th U.S. president, shocking the nation—and the world—with one of the biggest political upsets in history.

The Los Angeles Times said Trump’s epic victory “defied most pre-election polls and the opinions of the nation’s foreign policy, financial, and cultural elites.” And The New York Times declared it a “stunning repudiation of the Establishment.”

Now, the media have blamed the 2016 fiasco on a number of reasons: They oversampled urban voters and undersampled rural voters… They used outdated methods to reach potential voters (such as calling landlines instead of cell phones)… And many people lied to pollsters about their intentions to vote for Trump.

But we’ll let the ivory-tower academics and D.C. pundits debate what went wrong. Instead, I want to talk about the man whose system signaled the Trump victory—and get his forecast for the 2020 election, too…

At age 28, Jason made partner at the prestigious trading firm Cantor Fitzgerald. By 30, he’d built one of the most successful trading desks in America (with annual trades of over $50 billion).

In 2012, his former firm helped create the fastest high-speed trading system in Wall Street history. Time magazine, The New York Times, and The Telegraph all reported on this system, which could “look up to 30 milliseconds into the future.”

But he left all that behind…

You see, Jason wanted to create his own trading system—one even more powerful than what Cantor had assisted with.

And after seven years of trial and error, Jason developed a stock-picking system (which was vetted by the engineering departments at Ivy League universities like Cornell and Columbia), that tracks what the smart money is likely doing.

It’s so accurate, it can identify the market’s fastest-growing stocks up to 30 days in advance.

Now, you may be wondering what all this has to do with Trump’s historic 2016 victory. And the answer is: It seems the smart money can identify more than just triple-digit gains…

Here’s how Jason recounts the story:

Leading up to the election, everything was pointing to a Democratic win. The polls had Trump with a next-to-zero chance—or so the media said.

But something wasn’t matching the movement of the market. The data was telling us that Wall Street was preparing for an upset…

The market was breaking higher, but my system was picking up unusual selling. It looked like the smart money was positioning for the downside. So at my research firm, we suggested to a number of people that Trump would win.

And if you remember, the markets ended up crashing the night of Trump’s victory. The following day, calls came in from people who recollected our suggestion of a Red Team win—when no one else had uttered anything even close.

Now, as you can see in the chart below, while the market was climbing, Jason’s system went into overbought territory (the red horizontal bar)—signaling a sell-off… 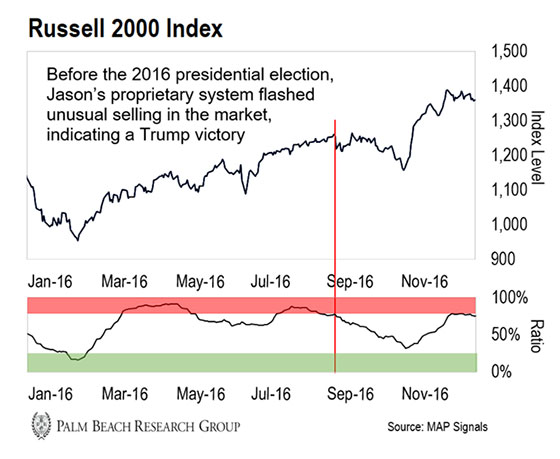 Based on this data, Jason and his team judged that smart money firms—big hedge funds and Wall Street institutions—were anticipating a Trump victory. And fearing it would tank the markets, they were getting out of their positions ahead of time.

So Jason was spot-on…

The night Trump won, futures tanked 8% as the Establishment panicked. But the market quickly recovered, finishing 3% up the next day.

Here’s the bottom line: Jason’s system picked up on what the smart money was doing.

At the time, it was selling due to the uncertainty of an untested Trump administration. And as it predicted, Trump went on to win—despite the odds against him.

So what is Jason’s system saying about 2020?

Well, I asked Jason what his system is indicating now, and here’s what he told me:

It’s a little too early to say. But our data is suggesting that Trump won’t be just a one-term phenomenon…

Since the start of the year, we’ve seen lots of buying in growth-heavy sectors like consumer discretionary and infotech—specifically in semiconductors. And when big institutions pile into stocks relying on future sales and earnings growth, it’s a sign of content with the current administration.

The big buying in small-caps also shows something interesting under the hood. The Russell 2000 Value Index is lagging heavily behind the Russell 2000 Growth Index. And the same is happening with the S&P sub-indexes. This means Wall Street is positioned to ride more of the wave that we’ve been seeing.

So for now, the smart money is expecting a strong economy to continue and growth to stay. This is all indicating to me that—whether you love him or hate him—Trump will be around for another four years… That’s what my system is saying at the moment.

And there you have it: Under current economic conditions, Trump is likely to win another term.

However, markets are volatile… Plenty can happen between now and November 2020. And you always have to account for geopolitical wildcards, like a military conflict or trade wars.

As always, we’ll continue following the markets for money-making opportunities—regardless of who wins.

P.S. As I’ve shown you above, Jason’s system can identify what the smart money is doing. While the mainstream media was predicting a Hillary victory from their “polls,” his system was tracking the markets. You can see how that turned out…

And tomorrow, Jason is revealing how his system—which can identify stocks the big money is likely buying up to 30 days beforehand—can help you profit, too.

During this free presentation, Jason will be unveiling the biggest breakthrough of his career: a system even more powerful than the one he helped Cantor Fitzgerald create in 2012. Plus, you’ll also have the chance to claim his No. 1 money-making recommendation.

So don’t delay—sign up right here…

Who do you think will win the 2020 presidential election? Will it be President Trump or one of his Democratic contenders? Send us your predictions right here…

The man CNBC called “The Prophet” has made a prediction that could double your money with some of America’s safest investments.

He’s called the dot-com crash… the housing crisis… and more. And now, along with announcing the biggest prediction of his career—he’s also revealing the secret to his investing success.

To find out all the details, just go right here… 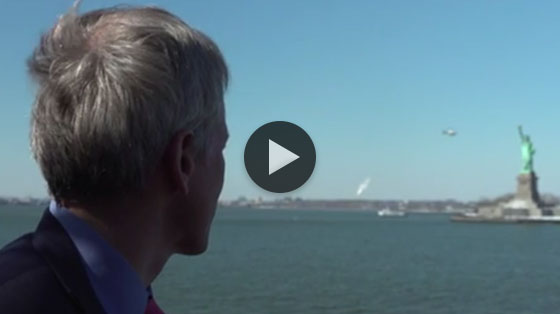