From 2013 to ’17, MarketWatch, Forbes, The Washington Post, and The New York Times, respectively, have written headlines warning about market bubbles… 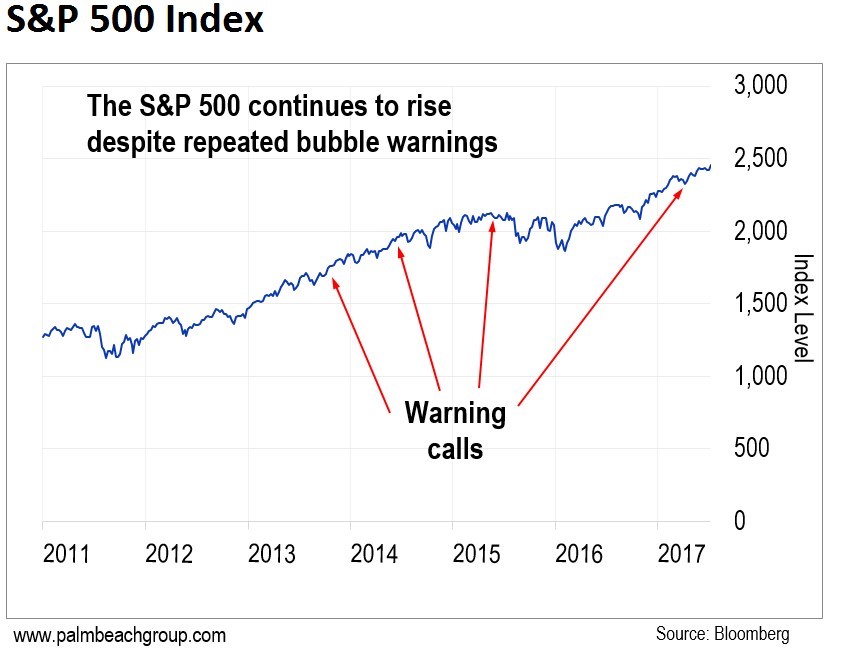 Despite those calls, the market has charged higher. It’s up over 70% since 2013.

Mainstream media pundits say it’s foolish for you to invest in the market these days. Otherwise, how can you explain their many fear-inducing headlines?

But as I’ve written over the past week, you should actually be long in the market right now.

In fact, last Wednesday I showed you why it’s profitable to buy a forming bubble.

Today, I’m going to show you another method you can use to profit from the current bull market…

This Theory Gives You an Advantage

You can sell them at a profit because someone else is willing to pay a higher price.

Greater fools are why bubbles form. In a bubble, people don’t care about value… They just buy at any price. That just keeps pushing prices higher.

But you need to be careful when playing the Greater Fool game.

When a bubble bursts, prices fall quickly… And you don’t want to be the fool holding a stock when it collapses.

When to Beat the Other Fools

The mainstream media is bombarding us with “facts” about how the market is overvalued. And that we’re in a huge bubble. We disagree.

But as I told you before, the easy money is made by going long when a bubble is just starting.

The key to this strategy, of course, is getting out of the bubble before it bursts.

One of my favorite ways to do this is by using a “moving average (MA) stop.” (Another trick I use to time a bubble is a trend line.)

I’m not going to bore you with all the details of how it works. What you need to know is that I like to use the 170-week MA line.

Many years ago, I received an email saying the market follows this line. I wish I remembered who sent it so I could credit them. But I don’t.

When the S&P 500 is above the line, it’s in an uptrend. When it dips below that, it’s in a downtrend.

Here’s how that looks over the last 35 years… 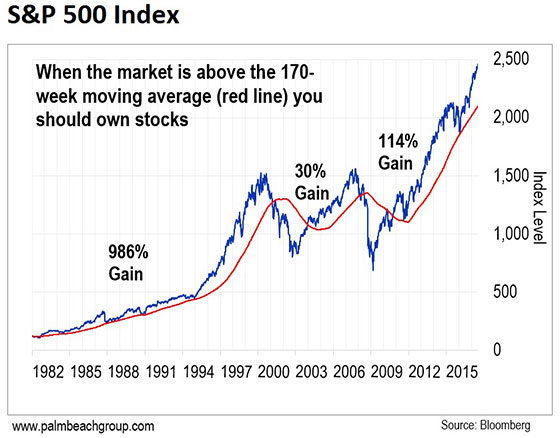 How to Beat the Other “Fools” Out There

This method keeps you in the market on the way up and gets you out when it’s going down.

It would have only returned about 30% from 2003–08… But that was in the middle of the second-worst bear market in the past century.

Right now, the line is at 2,102. That’s about the same level as the trend line I showed you last Thursday.

You can use this trick to see what the fools are doing.

When the price is above the line, fools are rushing in. When it drops below, the fools are getting ready to rush out.

If you follow this method, you’ll beat them to the exits.

The bull market is catching on across the world…

It’s not just U.S. stocks making new highs—so are stocks all around the world.

The MSCI World Index tracks stocks in emerging and developed markets. It’s a good gauge of the overall health of the global economy.

And right now, that gauge says things are looking good… 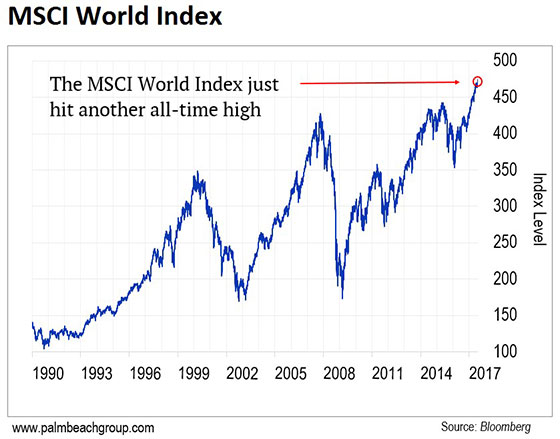 As you can see in the chart above, world stocks are at new all-time highs.

The bull market rages on.

From Charles C.: Hi, Teeka. I read your nice article on David and Sophia.

I recently started a low-carb keto diet and I would recommend also cutting out starches and natural sugars, including fruits and tomatoes. Increase your fat calorie intake by replacing these calories with coconut oil and butter and fried vegetables. Drink lots of water and have green vegetables at every meal.

You’ll sleep better, feel more alert, and your insulin levels will not swing up and down. I’ve lost 30 pounds since March and feel great!

From Ellen K.: My No. 1 way to alleviate stress is to read a good book. I also exercise and go to the movies. However, a quick email from you, explaining what is going on, what to do, or not to do, has the most calming effect.

From Scott S.: When I saw all my cryptos dropping a week or so ago, I was slightly concerned but figured, “Hey, it’s still up way above what I paid.” I also admit to wishing I had sold a bunch earlier. Then I’d be buying again now. But otherwise, I’m in for the long haul. It’s fun to watch my portfolio total go up and down. Up is better, though.

Teeka’s Reply: Thanks for the health tips. David and Sophia suggested the same. I’ve been eating a high-fat, low-carb diet for 11 days now and have already lost seven pounds.

As to selling and buying back, I’ve tried that in the past, and while I may dodge a short-term fall, I may miss the next stage of the rally. That’s why I don’t mess around with “ducking and diving.”

If I did that with one of our plays last year, I could have booked a 300% gain and saved us a 75% drawdown. But if I had failed to buy back in at the right time, I’d have missed a 2,000%-plus gain. Since our position sizes are so small, I’d rather sit through a 75% drop for the possibility of 2,000% gains than try and “duck and dive” my way for a few extra percentage points of potential profit.

If you have any diet or exercise tips you’d like to share, send them to us right here.

From Michael M.: I read your June 30 essay (“Trump Couldn’t Kill This Bull Market If He Tried”) with interest… And yes, I’d be interested in investing in marijuana. I know there is a lot to be made in this space, if you just know where. Would appreciate some expert advice on this subject.

Nick’s Reply: Hi, Michael. My colleague, Casey Research editor Justin Spittler, is one of the best when it comes to investing in marijuana companies. He recently traveled to Vancouver to attend the Cannabis Life Conference. You can get his take on the conference—and some places to start your research—right here.