Charlie is one of the earliest bitcoin millionaires.

He started a company called BitInstant in 2011. At its peak, the company handled 30% of all bitcoin transactions.

Shrem wanted to help unhook people from the banking system.

With BitInstant, everyday people could send funds anywhere in the world instantly… for fractions of a penny.

The profits were huge.

Charlie quickly realized the potential of bitcoin and amassed a personal fortune reported to be north of $20 million.

But his career got sidetracked…

In 2014, Charlie was charged with facilitating $1 million in unlicensed bitcoin transactions on the now-defunct drug-buying website Silk Road.

He initially faced 30 years in prison… but pleaded guilty to a lesser charge.

The judge in the case thought two years would be sufficient. Charlie eventually was released after serving a little more than a year.

In court, Charlie took responsibility for his crime. And he vowed to “change the world” by showing he had learned from his mistake.

And that’s what he’s doing today…

Charlie is a pioneer in applying blockchain technology to business problems.

He did it first in the money transmission industry.

Now, he’s dragging another market kicking and screaming into the 21st century.

Charlie and his business partner Jason Granger are using the same technology behind bitcoin (called the blockchain) to do it.

[The blockchain is a decentralized, secure digital ledger. It’s revolutionizing the realm of digital transactions—everything from trade to music to real estate.]

It’s a new way to invest in private enterprises while unlocking $4.2 trillion in “frozen” capital.

PE is the money put into private companies that don’t yet trade on public exchanges.

In traditional PE transactions, investors put money into a fund and a management company invests the money in private enterprises.

After seven to 10 years, the fund is liquidated and the investors get their money back, along with (hopefully) a good investment return.

Charlie and Jason are completely upending this practice. And giving investors control of their money back.

They’ve created a blockchain fund to make private investments. Here’s how it works…

Since 1989, the PE market has exploded from just a few billion to more than $4.2 trillion.

The problem is technology hasn’t kept pace with the growth in assets.

PE shares have virtually zero liquidity. Unless you are willing to pay large fees (10%–20%), you can’t sell them and you can’t borrow against them.

Compare that to the U.S. stock market. Nearly $20 trillion in public assets can be bought, sold, or borrowed against virtually any time of day or night.

That’s because technology has made it easier, faster, and cheaper to buy, sell, and borrow against stocks. You can do it with the click of a mouse.

The same can’t be said about PE shares. Your money is literally trapped until the private company goes public or is bought out.

Tying up $4.2 trillion in private capital is an enormous waste of resources.

But that’s all about to change.

Charlie and Jason are creating a blockchain to fund and track private investments.

A New Type of Investment Fund

The name of Charlie and Jason’s fund is Mainstreet Investment LP. The fund will invest in companies that are proven, profitable businesses.

Investors can buy cryptocurrency tokens that give them a stake in the fund. The tokens are essentially “shares” and are issued in an initial offering.

The plan is to distribute profits right back to the token holders.

So just like stockholders, token holders will receive cash dividends from companies in the portfolio.

Now here’s what makes this project so special….

The transparent and tamper-proof nature of the blockchain makes it very easy to prove the value of each token. You can see what each token represents and its cash-flow history.

The digital tokens also make it easy to sell, lend, or borrow against their private holdings. And you can do all of that for zero commissions.

That has never existed before in the world of private equity.

But there is one drawback…

If you can’t get in the fund now, don’t worry.

This space is so new that there is still a ton of money to be made… And I’ll continue to follow this trend and the best ways to profit from it.

P.S. Mainstreet is just one way that the blockchain is disrupting age-old industries. Next week, I’ll introduce you to more ideas that are about to change the world… and make shareholders rich in the process.

Are you still skeptical of cryptocurrencies? Let us know why right here…

Bitcoin is making new all-time highs. Just look at the chart below… 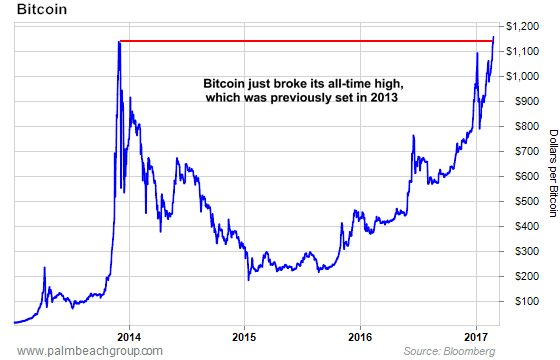 On Thursday, buyers surged into bitcoin and pushed it well above its previous high of $1,137 set on November 29, 2013.

Cryptocurrencies are in demand now more than ever. They’re a way to get around the War on Cash. And now, they’ve become an acceptable investment, too.

Editor’s Note: We asked if you agreed with Bill Gates’ opinion that robot workers should be taxed. The Palm Beach community responded… and it looks like Bill doesn’t have many backers…

From Mike C.: Pertaining to Bill Gates’ quote about taxing robots. What a most ridiculous statement. This kind of thinking is nothing but liberal dribble. It has no reality in a free society.

From Ben T.: Bill Gates is totally wrong about taxing robots. They are already taxed as “business property” in most states. Taxing robots for taking factory jobs makes as much sense as taxing a tractor for taking farm jobs.

From Daniel T.: I do not think robots should be taxed. I do think corporations who utilize robots should have a “different tax level” than those who utilize only humans for activity that could be performed by robots.

From Hermien R.: When you first wrote about the three criteria for picking elite companies, Natural Health Trends Corp. (NHTC) was the only company meeting all three on your initial list of 10. But when you published your Daily Elite list, there were suddenly 25 companies. Where did they come from if they were not among the original 10 companies?

Nick Rokke’s Reply: Hi, Hermien. Thanks for the message. The initial list of 10 was just a small sample of 281 companies that had a return on invested capital (ROIC) of more than 20% over the past five years. The Daily Elite 25 ranks the cheapest companies that have an ROIC of more than 20% and are growing, too. NHTC isn’t the only company to meet our three criteria of high ROIC, growing, and cheap. It’s the highest ranked of the 25 on our list to meet the three criteria.

Did you see the incredible true story of how you could generate a small fortune this year starting with just 50 cents?

It’s unknown by 99% of the public… But if you’re interested, you must act soon. Details on what to do here…