Just look at this chart. 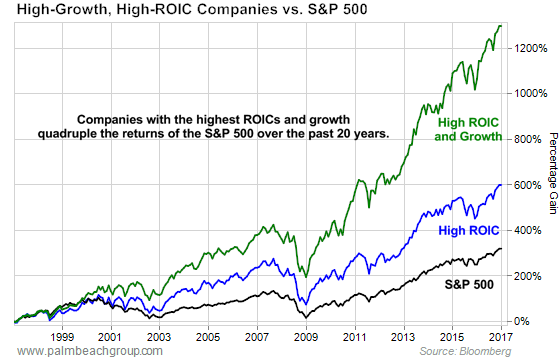 You see the green line… If you want to ride it, read on…

In yesterday’s Daily, I shared with you my three-step method for identifying elite companies. Here’s the checklist again:

The first step of our method is to find companies with a high ROIC. That measures a company’s profitability… and how efficiently it turns long-term assets into money.

A company making an ROIC of 20% per year for at least five years in a row is a good candidate for elite status.

By applying just that first step, you’d double the returns of the S&P 500 over the past 20 years. That’s the blue line above.

Yesterday, we showed you 10 companies that ticked the first box.

But if you really want to get on the green line and quadruple your gains, you need to move on to Step 2. I’ll show you how to do that today…

The Next Step to Increase Your Gains

As we explained Thursday, just because a company has a high ROIC one year doesn’t mean it’s elite. It may be a fluke. Or shady accounting. Or some other transitory reason.

In fact, some companies with the highest ROICs over the past five years have been bad investments.

To avoid duds, we need to move to Step 2: broad-based growth.

We want to see an increase in revenues, free cash flow, and gross margins.

This assures that the company isn’t losing its edge by aggressively expanding. Some companies grow revenue but at the expense of profits. That’s not always a good business decision.

To Pump up Returns, You Need Growth

We started with over 4,200 publicly listed U.S. companies with market caps over $200 million.

We were able to narrow that to 281 by looking at companies with more than 20% ROICs over the past five years.

We filtered the 10 companies by growth… and only four stood out (highlighted in green in the table below): Aspen Technology, Natural Health Trends, Marriott International, and Domino’s Pizza.

Each passed all three of our growth tests (revenues, free cash flow, and gross margins).

These are some of the highest-quality companies around over the past five years.

If you filtered for just ROIC and growth, you would beat 99% of investors. These companies crush the market.

But we’re still one step away from finding the best-of-the-best investments. On Monday, I’ll show you which company could have really catapulted your investment returns.

Defense stocks are in a bull market…

Earlier this week, the Pentagon asked President Trump for a $30 billion increase to its 2017 budget.

Trump gave military and budget officials 90 days to come to an agreement. Whatever the agreement, defense contractors will be big beneficiaries.

That’s why companies like defense contractor General Dynamics (GD) are near all-time highs. 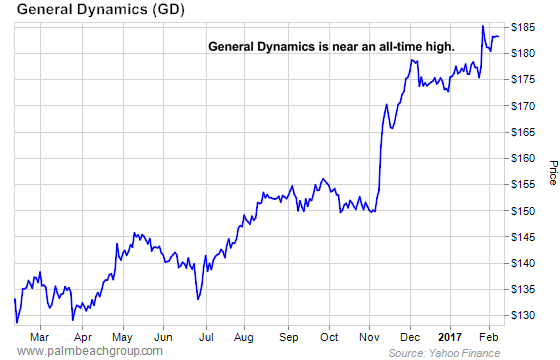 Whether or not you think we need to spend more money on defense, there’s a clear play: Buy defense stocks.

Thinking About Buying a Home? Buy now before interest rates rise 25% to 50% over the next few years. Almost a decade after it all began, the Federal Reserve is finally talking about unwinding its grand experiment in monetary policy. And when it happens, it could pose a threat to the U.S. housing recovery. The surge in mortgage rates is already putting a dent in housing demand. Sales of previously owned homes declined more than forecast in December.

Made in the USA… by Robots: During his campaign, then-candidate Donald Trump made bringing jobs back to the United States his major priority. Now, President Trump is pushing companies to build new factories at home. One company taking on the challenge is athletic shoemaker Under Armour (UA). The company is opening a state-of-the-art factory in Baltimore… but it will be staffed mainly by robots.

Meanwhile, New Balance’s “Made in USA” shoe line costs as much as $165 per pair. Its core line (made abroad) costs $100 or less. If American consumers want lower prices for products, the choice is clear: free trade or automation.

And It’s Not Just Factories: Bank of America has opened three completely automated branches over the past month. Like many U.S. banks in recent years, Bank of America has been reducing its overall branch count to cut costs even as it opens new branches in select markets. The branches in Minneapolis and Denver are smaller than a typical branch and use more technology. Another sign that automation is likely here to stay.

What’s your take on automation? Let us know right here…

Editor’s Note: On Wednesday, we asked you what the greatest threat to U.S. workers is: Immigration or automation? Reader Tom B. shares his take…

From Tom B.: Automation is by far the greater threat. Robots can work around the clock. Robots don’t complain and will follow orders without question. They don’t need restroom or lunch breaks. They don’t require sick pay, health insurance, vacations, time off, maternity leave, promotions, etc. They can work in places where humans can’t work.

When a robot breaks, another robot will fix or replace it. Training a robot will be easy—upload the appropriate software and add the necessary tools to the robot for the job.

God help us all should robots and AI computers conclude that humans are irrelevant!