Being that young, he had to use his father’s name to get the Apple developer’s license.

And having no formal training, he had to learn to create apps all on his own.

His first app played audio snippets from speeches by Steve Jobs. It was rejected due to copyright issues.

Then he produced an app that allowed users to touch a piece of wood and create a knocking sound. It actually made Nick a few bucks. But it wasn’t enough to reach his goal, which was to buy a new computer.

So Nick pressed on and created an app called Summly.

It was inspired by his maxim, “time is the new currency.”

The app takes long pieces of text and compresses them to a few representative sentences.

The tech world saw its value immediately. Accurate summaries would save an immense amount of time in a world where we’re bombarded with content.

In fact, it attracted the attention of Hong Kong billionaire Li Ka-Shing, the wealthiest man in Asia at the time.

Not bad for the then 17-year-old kid.

Obviously, D’Aloisio deserves a lot of credit. He put in the time. And he did all the hard work.

But he also had fortunate timing to start when he did. Perhaps without realizing it, he was at the beginning of a massive trend that greatly increased his odds…

There’s a “dApp” for That

Today, we’re seeing a similar trend in the blockchain space, the underlying technology of cryptos.

If you’re not familiar with the blockchain, it isn’t that much different than the internet.

Both are massive data networks. The difference is that the internet is centralized and controlled by middlemen, whereas the blockchain is decentralized and peer-to-peer.

That means there is no single entity controlling the network, and data is transmitted between two computers or programs versus passing through something like a data center before reaching its destination.

Now, we believe the blockchain will revolutionize how we transact value. And it’s already spawning the next wave of apps – called decentralized apps or “dApps” for short.

There are dApp games too… such as blockchain-based Axie Infinity. It’s a battle game like Clash of Clans and others, but it allows users to raise, battle, and trade creatures called Axies for actual crypto.

Like D’Aloisio and his internet apps, we’re in the early stage of dApps… and as I’ll explain, now’s the time to get in.

But before we get that… let me show you how traditional apps helped create one of the biggest tech companies in the world.

According to Apple CEO Tim Cook, “The App Store is a place where innovators and dreamers can bring their ideas to life, and users can find safe and trusted tools to make their lives better.”

You can see its success in the chart below. There are now over 4 million apps in the Apple App Store, up from just 94,216 apps in 2008 when it first launched. 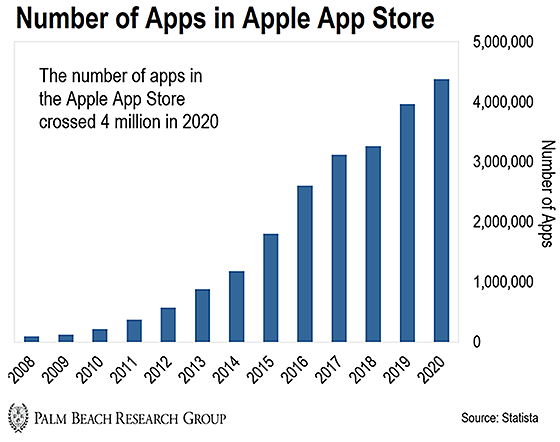 Why has the Apple App Store been so successful?

In short, it created an ecosystem that gave developers a one-stop shop for distribution, search, and validation services. It also provided them a set of tools to build and monetize apps.

And it gave users an easy way to improve the functionality of their phones. It was also versatile and easy to use since the apps were available on all Apple devices.

The App Store has been a boon to developers and Apple’s bottom line as well.

In 2020 alone, Apple customers spent an estimated $72.3 billion on in-app purchases, subscriptions, and premium apps in the Apple App Store. That’s about 28% of its overall $260 billion revenue – a huge chunk of business.

And since it launched, Apple has paid over $150 billion to developers who sell digital goods and services through the App Store.

While this monetization is substantial, it significantly underestimates the size of the Apple App Store ecosystem.

And it demonstrates the power of a strong ecosystem.

It brings stakeholders together across industries and technology areas by offering access to a common set of content, applications, analytics, datasets, and other tools.

The dApp Store of Crypto

As we learned from Nick D’Aloisio’s story, tapping into the right trend at the right time can create immense wealth-generating opportunities – no matter how old you are.

Right now, dApps are developing the way apps did in 2008. And there are several projects adding new dApps every month.

But there’s one in particular leading the way. It’s responsible for over 80% of dApps. And it could certainly become the “App Store” of the crypto space.

If it can do what Apple did, Daily editor Teeka Tiwari believes it will be next trillion-dollar coin. It will take crypto to next level… and send smaller coins up 25x or even 50x – just like Apple did for some breakout apps on its platform.

That’s why on Wednesday, March 31 at 8 p.m. ET, Teeka is hosting Crypto’s Next Trillion-Dollar Coin, a free event where he’ll share all the details about a breakthrough altcoin with the potential for life-changing returns.

While the mainstream media and Wall Street are focused on bitcoin volatility and other market sectors, tech billionaires are quietly going all-in on this coin and adopting its technology to enhance and fund their projects.

And the good news is, there’s still time for Main Street investors to join them and cash in…

So click here to reserve your spot for Teeka’s big event. You’ll even get the name and ticker symbol of this coin just for showing up, along with access to three training sessions to help you prepare you for the biggest crypto story no one is talking about.