That’s what many fans of Jim Cramer’s television show Mad Money think when they hear his name.

But Cramer’s carnival barker shtick is just for television. He’s quite an intelligent investor.

That would have turned every $10,000 invested into more than $163,000 during that 13-year span. That puts him among the best-performing fund managers of the time.

Cramer’s actions speak louder than his words. But his words are powerful, too…

That’s why I suggest you read his book Real Money.

In yesterday’s Daily, we told you about the six stages of the business cycle. Here’s what we wrote:

The business cycle is like a calendar year… But the seasons aren’t as predictable. However, if you know which season (or “stage”) you’re in… you can find profitable opportunities.

As we told you yesterday, we can’t predict when each “stage” changes, but we can determine which “stage” we’re in.

Once you know which stage of the cycle you’re in, the next step is to find the assets that perform the best within it.

Cramer’s book is the perfect complement to this strategy…

This may seem counterintuitive at first. But think about it this way…

When the economy is at its nadir, auto companies are beaten down and hated. So, they’re likely cheap.

Paper and chemical companies perform well only after the rebound. Nearly everything we buy contains chemicals and most contain some paper. So when the economy picks up, these companies take off.

Here’s the key takeaway: If you know which stage of the business cycle we’re in… and you know which sectors perform best in each stage… you can make a killing in the markets.

Now, let me show you how this strategy works…

Putting It All Together

Before we put this strategy together, let’s recap the six stages of the business cycle we mentioned yesterday.

We told you that we’re near the end of Stage 4. We’ve seen eight years of economic expansion. And we think the S&P 500 is close to peaking. 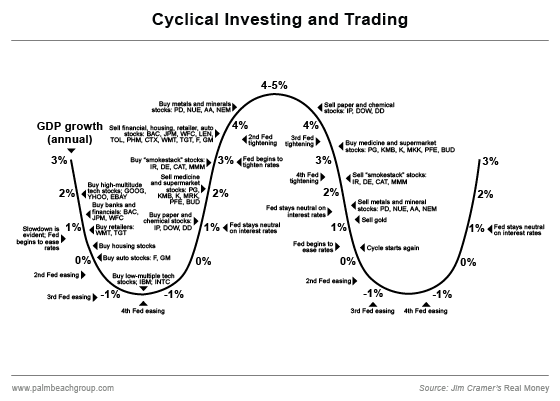 At first glance, this model appears complicated. But once you dig in, it’s simpler than it seems.

Here’s what that all means…

As we said above, we believe we’re nearing the end of Stage 4 of the business cycle. That means we’re somewhere near the top of Cramer’s curve and headed for a slowdown.

If that’s the case, you should consider dumping some of your financial, retail, auto, and housing stocks.

The next step would be to look into some quality metals and industrial companies.

If you want some exposure to large industrial companies, consider the Industrial Select Sector SPDR ETF (XLI). For metals, the SPDR S&P Metals and Mining ETF (XME) is another good option.

The metals and mining sector is in “go mode”…

The S&P Metals and Mining Index tracks stock market cycles closely. And when it gets going, it takes off.

As you can see in the chart below, the last two upswings in the index returned gains of 805% and 275%. Right now, the index is only up 166%. That suggests it has plenty of room to run higher… 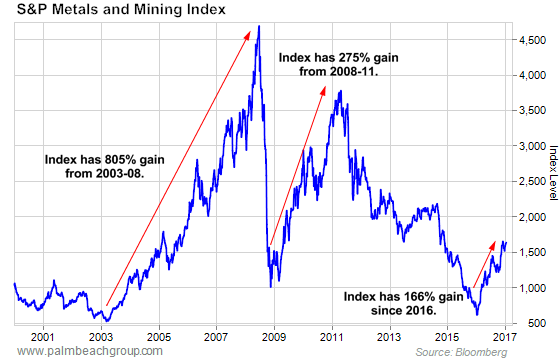 As we mentioned above, the SPDR S&P Metals and Mining ETF is a good option to capitalize off this trend.

Bitcoin could be worth more than $1 million per coin…

I got a chance to meet Filipowski at the North American Bitcoin Conference last week in Miami. Guo was also in attendance.

Here’s why these innovators think bitcoin can top $1 million…

Eventually, they believe the blockchain will replace the internet as the main online source for transactions.

Unlike government fiat currencies, the number of bitcoins to be created will remain fixed. So, their value can’t be eroded by inflation.

And as millions of people start using blockchains to make transactions (for example, money transfers)… each individual bitcoin will soar in value.

Now, $1 million may seem farfetched. But bitcoin has rocketed from virtually worthless to more than $1,000 since it was created in 2008.

Even if bitcoin just captures a tiny fraction of those projections, it could be one of the most profitable assets of all time.

Here are a few other big ideas to emerge from the conference:

My favorite idea was a new cryptocurrency app dubbed the “PayPal killer.”

The app will make bitcoin indistinguishable from normal financial transactions… and bring bitcoin to the masses. It could make online payment company PayPal obsolete.

If you want to get in on these trends, we suggest you own a little bitcoin. Not only is it a chaos hedge against the War on Cash, but it comes with plenty of upside.

For those who may not be able to get into bitcoin, there’s another, smaller cryptocurrency that PBL editor Teeka Tiwari and I like.

Some people are calling it the “next bitcoin”… but it’s trading at just a fraction of bitcoin’s price. It’s up nearly 20% since we recommended it last year… In fact, this cheap, new currency could turn every $200 stake into a rare $6,848 gain.

During President Trump’s inauguration speech… he issued a warning to the Deep State unlike any since President Reagan. Of course, the media ignored it… But you can guarantee Washington won’t.

This situation will quickly come to a head in the coming months—perhaps even during Trump’s first 100 days… That’s why Doug Casey issued a shocking forecast concerning Trump’s presidency. We urge you to watch it immediately…