Trading volume surged to all-time highs this past month, according to bitcoin statistics service Coin Dance.

In the first week of September, more than 163.7 million Venezuelan bolivars (about $16.4 million) were exchanged in bitcoin. It’s up nearly 350% from the same time last year.

Online cryptocurrency magazine The CoinTelegraph reports that’s more than double the volume traded in the United States for the same week (about $7 million).

[To put that in perspective, the U.S. population of 320 million is more than 10 times that of Venezuela, and the U.S. economy is almost 35 times greater than Venezuela’s.] 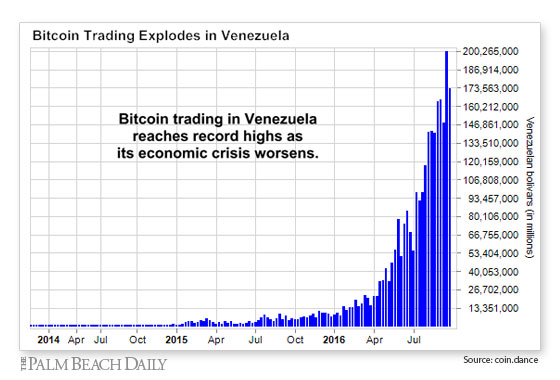 In Venezuela, they don’t have gold fever… They’re calling it “bitcoin fever.”

A major insurgency in the War on Cash

Regular Daily readers know bitcoin is one of our favorite alternative chaos hedges against the global War on Cash. Governments and central banks around the globe are pushing to end cash transactions altogether. But bitcoin is a ready alternative to these draconian policies.

And Venezuela is proving this out…

In an effort to “stimulate” the economy, the country’s central bank continues to devalue the bolivar. That’s causing capital to flee at a rapid pace. Citizens don’t want to be left holding Venezuelan money. It depreciates faster than a brand-new car driven off the showroom lot.

Those onerous controls have forced the closure of wire services like Western Union and MoneyGram. That leaves few channels for Venezuelans to move money around… or purchase goods and services online… without government consent.

[Cryptocurrencies are digital money that’s not governed by a central bank or controlled by any single source.]

One Venezuelan bitcoin trader discovered its usefulness when buying a $10 cellphone battery on Amazon.

He couldn’t pay for it in dollars. So he bought bitcoin off a friend using local currency. Then he used the bitcoin to purchase an Amazon gift certificate… which he then used to buy the battery. “Bitcoin is a way of rebelling against the system,” he said.

He’s right. According to one digital currency analyst, Venezuela’s economic dysfunction has made the country “ripe for a major cryptocurrency adoption.”

The canary in the coal mine

Venezuela is an early casualty in the War on Cash. But it’s a “world war” that afflicts citizens around the globe… including Americans.

As we’ve noted, Federal Reserve Chair Janet Yellen has signaled the Fed is ready to lower interest rates into negative territory at the first sign of a new recession.

When that happens, you’ll have to pay interest just to keep your money in the bank (like many in Europe are discovering today).

But if you think you can just pull out your money in cash and hide it “under the mattress”… think again. The ruling elite is out in force, declaring the time to ban cash outright has come.

But citizens around the world are fighting back… with cryptocurrencies. From Russia, to New Zealand, to Sweden, to Venezuela… people see this new “asset class” as a safer alternative than their own fiat currencies.

There’s no wonder why…

Cryptocurrencies like bitcoin are private and decentralized. They can’t be controlled by governments through capital controls and can’t be devalued through central-bank money printing.

And they go a long way in maintaining user privacy and anonymity… qualities almost extinct in today’s digital age.

Bottom line: I recommend you own a small amount of bitcoin and a few other cryptocurrencies as a hedge against the War on Cash. Palm Beach Letter subscribers can read about our favorite cryptocurrencies—as well as the simplest and safest ways to purchase them—in our 2016 Cryptocurrency Survival Guide.

If you’re not a subscriber, you can claim your own report today, right here.