From Teeka Tiwari, The Palm Beach Letter: For the past three months, I’ve been pounding the table about digital currencies.

It’s been one of our most popular plays. I’ve received tons of feedback from subscribers interested in buying them. And those who followed me into these currencies are now profiting.

Since we recommended them in April…

Now, before I tell you what’s behind these gains, you may be wondering whether digital currencies are money.

Here’s the truth about currency: it can be anything.

Take the U.S. dollar. There’s nothing backing it up—we went off the gold standard in 1971. So, the dollar really is… just a promise… an “act of faith.”

A digital currency is no different. It’s simply internet-based money. And like any other medium of exchange, many people around the world have decided it is money.

They believe they’ll be able to use digital currencies in the future to buy stuff. This utility alone gives it value.

These two forces are driving up digital currency prices

When we initially recommended the digital currencies, we wrote they were some of the best alternative investments you could make to protect yourself from low/negative interest rates and the War on Cash.

So far, our thesis has been spot on…

At the beginning of the year, the Federal Reserve indicated it would raise rates four times. And as recently as June, at least two rate hikes were on the table.

But with the poor May U.S. jobs report and June’s Brexit (the United Kingdom’s vote to leave the European Union), those rate hikes are now off the table.

In fact, the odds of a rate cut are now higher than those for a rate hike.

Brexit and negative interest rates are pushing investors into chaos hedges such as gold and digital currencies.

[“Chaos hedges” are protection from times of turbulence. For more details, read our asset allocation guide.]

The day after the Brexit vote, gold was up 5.5%, and our main digital currency recommendation was up 3%.

Now, if you missed out on our first recommendation, it’s not too late profit from these three currencies. But you must act by July 10.

Why you need to act now

You see, July 10 is when one the biggest events in the history of digital currencies is scheduled.

The last time this event happened, it ignited a 12-month bull market in one of our digital currencies—the biggest rally in its history.

The event is called “the halving.” It’s a process digital currencies use to prevent inflation.

Here’s why this rare event is so important… It should send digital currency prices higher. 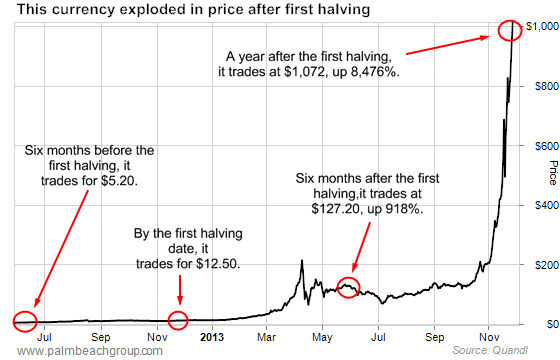 As you can see from the chart above, the halving was more than a one-day event.

Prices for our favorite digital currency had already moved up over 100% in the six months before the halving.

Six months after the last halving in November 2013, prices for our currency play were up 918%. A year after the halving, prices were up an astonishing 8,476%!

So, even if you get in months after the halving, you could still make big gains from this rare event.

Now, our first digital currency isn’t the only one that will get a boost from the halving, though. Our other two plays should ride this tailwind, too.

Although I expect the halving to boost digital currency prices, potential price appreciation isn’t the only reason you need to own these currencies.

They can be a safe haven for your wealth. Let me explain…

The War on Cash

As I mentioned above, governments around the world are pushing negative interest rates and threatening to ban cash.

A negative interest rate is when a government or bank charges you to hold your money in a bond or account. It’s like a second tax on money you have already earned.

More than 20 countries have already implemented negative rates. And the United States has been flirting with the idea, too.

To sidestep these negative rates, citizens in countries affected by them have been hoarding their cash.

For instance, in Japan, one of the hottest-selling items in the country has been safes. People are using them to store their cash at home rather than a bank.

If the U.S. Federal Reserve goes forward with negative rates, buying a safe to hoard your cash won’t be enough to protect your money.

That’s because negative interest rates will be accompanied by the other government policy I’ve told you about… the War on Cash.

These two forces could wreck your retirement plans if you don’t take action right now.

You see, the government knows that if it institutes negative interest rates, people will begin to hoard their cash, just like in Japan.

After all, why would anyone pay to put their money in a bank?

For negative interest rates to really work, though, the government needs to ban cash. Not all cash at first, but at least large denominations to start.

The very next day, he was supported by former U.S. Treasury Secretary Larry Summers, who then called for an end to the U.S. $100 bill.

If large denomination notes are banned or removed from circulation, it would be difficult to hoard money in your home. Imagine trying to store $100,000 worth of savings in $1, $5, or $10 bills.

But there’s a better way…

An alternative way to “hide” your money from negative interest rates

If you want to protect your money, you’ll need to find investments that maintain the privacy and portability of cash… but aren’t hurt by low or negative interest rates.

And digital currencies do just that.

Consider this… $1 million in $20 bills would weigh over 100 pounds. That would require a massive carrying case to move around.

On the other hand, $1 million in digital currencies can be carried in a flash drive. That’s because your money is in digital form.

Now, some savvier investors may opt to buy gold to shelter their wealth from negative rates or a cash ban. And I do recommend owning some gold.

It’s the safest and most secure way to protect the value of your money… but it’s not very convenient.

Although gold is a good store of wealth, you can’t just break off a piece of gold and anonymously go buy something with it.

When you’re ready to buy something, you’ll need to convert your gold into some other form of currency.

And like cash, our favorite digital currency is liquid.

It is accepted by more than 100,000 merchants as payment, including Overstock.com, Cisco, Wal-Mart, Starbucks, and Microsoft.

And best yet, when you use digital currencies, you remain anonymous. So, your financial privacy will be secure.

What to do next

The War on Cash and negative interest rates are radical and insane measures. They are also huge threats to your financial security… and they’re speeding up the major monetary collapse we believe is coming.

But you can protect your wealth from these government policies by sheltering a small portion in digital currencies.

Not only will they insulate you from negative interest rates… they’re primed to go higher. With the halving upon us—we expect our digital currencies to rise even more.

To learn which three digital currencies Teeka is recommending, click here to order his special report, the 2016 Cryptocurrency Survival Guide: The Only Complete Guide to the Cryptocurrency Markets. (Current paid Palm Beach Letter subscribers can access the report right here.)