As the only newsletter with a cryptocurrency portfolio, we get a lot of questions like this one from reader Cathy C.:

I sent one-half bitcoin to my wallet at Coinbase. So far it hasn’t arrived. And I can’t see my transaction on the blockchain. Please assist.

Some are more panicked.

“Did I just lose all my bitcoin?” one reader asked in January.

These subscribers were experiencing what’s called an “unconfirmed transaction.”

Understandably, this message freaks out a lot of people who are new to bitcoin. But you shouldn’t be worried.

Because of its rapid growth, the bitcoin network at times experiences bottlenecks. This happens when there are too many transactions to process at once. And that can result in an unconfirmed transaction.

It can take hours to verify smaller transactions. And to a novice, it looks like their bitcoin just disappeared.

The bitcoin is never lost. And the transaction will go through.

Like any new technology, bitcoin is going through growing pains. In this case, the network needs to expand (called “scalability”).

I’ve been researching bitcoin for months. And I see a solution on the horizon.

If the bitcoin community can make these fixes, it will make the cryptocurrency more user-friendly. And much more profitable for investors.

First, let me explain why this scaling problem is such a big deal…

Longtime readers will know that the underlying technology of bitcoin is called the blockchain. The blockchain is a digital public ledger that tracks bitcoin transactions.

Now, think of the blockchain as a two-lane highway in a small city.

If the city grows, traffic on the highway will increase. And that will cause traffic jams if the highway is not expanded.

But if you add new lanes to the highway, you can increase its capacity.

That’s where bitcoin is now. It needs to add capacity to handle the increasing number of transactions on the network.

There are three modifications bitcoin can make to solve this problem. I think we’ll see them implemented within the next year.

Adding Lanes to the Bitcoin Highway

The first modification is called SegWit.

Without getting technical, SegWit increases the size of each block on the blockchain.

It’s like being able to print on two sides of a piece of paper instead of one. You just doubled your capacity.

On April 26, a cryptocurrency called Litecoin activated SegWit on its blockchain. This is big because Litecoin is similar to bitcoin. So it will serve as a testing ground.

If SegWit is successful on Litecoin, bitcoin will likely follow.

The next modification is called the Lightning Network. It works on top of the bitcoin blockchain.

The Lightning Network uses payment channels. That allows near-instant transactions at rates of millions per second. And the fees are just a fraction of a cent. The local payment channels all tie into the global bitcoin network.

The Lightning Network will give bitcoin the speed demanded by the marketplace.

The final modification is called Rootstock.

The program offers many features. But the one I’m most excited about is smart contract functionality. This feature will increase the capability of the bitcoin network.

If bitcoin adopts all three modifications, it will be like going from a two-lane highway to an interstate freeway with six lanes. And that will solve bitcoin’s scaling issue.

That’s a huge deal for users and investors.

Bitcoin is about to become more user-friendly. As it becomes easier to use, we’ll see increased adoption. And that means we’ll see the price go up further.

You still have an opportunity to get in before the masses. And the easiest way to profit is to buy bitcoin today.

P.S. Cryptocurrencies are part of the world’s fastest-growing market. Over the past year, I’ve worked with PBL editor Teeka Tiwari to research hundreds of them. And we’ve selected four of the best-performing cryptocurrencies to add to our portfolio.

And now on to a special Chart Watch from my colleague Jeff Clark, editor of Delta Report.

This is a dangerous situation…

It’s not obvious. Major turning points in the financial markets rarely are. Nobody rings a bell at the top of a bull market, right?

But Quasimodo is hanging out in the high-yield-bond bell tower. And he’s just about ready to pull on the rope. 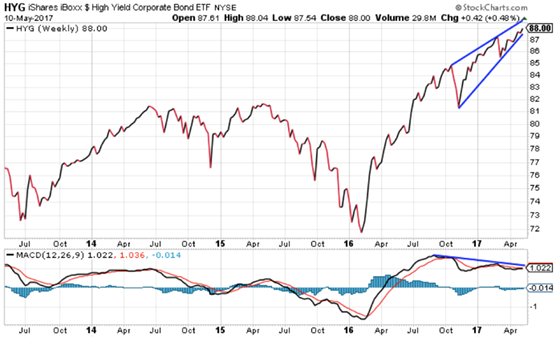 You see, the stock market and the junk bond market tend to move in the same direction.

So with HYG rallying to a new high, stocks are likely to follow.

It’s “risk on,” baby. The stock market is in rally mode.

Traders just can’t be bearish here. The upside momentum is too strong to fight. So if you’re bearish on the stock market, you’re better off sitting in cash on the sidelines than trying to fight the bullish momentum.

The last time this much money poured into our military, investors had the historic chance to turn $1,000 invested into $550,000! 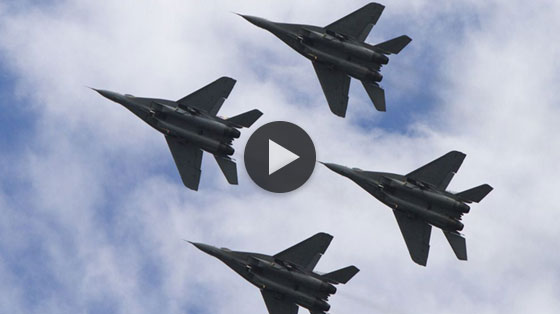