I have a confession…

I hate talking politics. It pains me to have to pay attention to a bunch of old men squabbling in D.C.

But the fact of the matter is, government has gotten so big, we—as investors—can’t ignore it.

The government is directly responsible for a large chunk of the economy. Its spending alone makes up over 20% of U.S. gross domestic product (GDP). Indirectly, it affects the whole economy. After all, politics moves investor sentiment, and sentiment moves markets.

Nowhere can we see this better than in the financial sector. While financial firms aren’t a part of the government… regulations can affect how profitable they are.

Case in point: Yesterday, we showed you how financial stocks have more than doubled the return of the S&P 500 since the election. This surge occurred on hopes that Trump’s administration would cut banking regulations. And less regulation means more profits for banks.

As the political mood turned after the election, financial stocks shot up over 20%…

You might be wondering if you missed the rally. You haven’t. In fact, banks are cheap compared to their historical average… and where they traded in 2007.

Plus, if you can manage to see through the political racket, you’ll find an opportunity ripe for investment.

Banks Are Far From Bubble Territory

In the chart below, you’ll see the value of the S&P 500 Financial Index since 1990. You’ll notice I included the price-to-book (P/B) ratio. The P/B ratio measures the price of the stock against the value of the company’s assets. This is the most important valuation metric for financial stocks—big investors in this space care more about price-to-book than any other ratio for financials.

The red line in the chart below is the average P/B ratio over the last 27 years. Note how financial stocks are still well below that line… 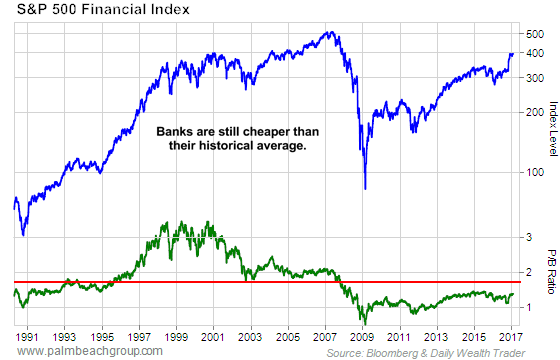 Also note that financial stocks are below the 2007 valuations banks had pre-Dodd-Frank (the extensive financial regulations passed in 2010 as a knee-jerk reaction to the financial meltdown)… and even further below valuations from the late 1990s.

Why Valuations Will Rise

Valuations of banks should increase for three main reasons.

The first, as we covered, has to do with Trump’s plan for less regulation. Less regulation would allow banks to operate freely and devote fewer resources to compliance.

In fact, the last time Congress repealed major banking regulations was in 1999 when it pulled back the Glass-Steagall Act. The Act limited banking functions by prohibiting commercial banks from getting into the investment banking business, and vice versa. And look what repealing Glass-Steagall did to bank valuations (they shot up in the mid- to late ’90s)…

There’s another reason why financial valuations will rise…

The economy is still growing. Last year, GDP was up 3%. And with the unemployment rate at a low 4.8%, people have the means to pay back loans. Plus, consumer confidence is near all-time highs. When that happens, consumers spend more freely and take out more loans. This environment is perfect for banks.

Net interest margin is the difference in rates that banks charge customers for loans… and how much they pay in interest on deposits. The bigger the margin, the more profits for the banks.

Net interest margins usually increase along with interest rates. The Fed said it still plans to raise rates three times this year. If it keeps its word, banks will benefit.

As we mentioned last month, in this stage of the business cycle, we should be looking to exit financial positions…

But we need to make an exception today, at a time when politicians start favoring an industry that’s trading cheaply.

If Trump is successful in cutting regulations, banks will accelerate their profit growth, and we will see valuations and prices follow suit.

P.S. Banks aren’t the only cheap plays on my watch list right now. Readers have been asking about my top “cheap, elite companies.” More on that… tomorrow.

The world’s largest public company just broke out to a new all-time high.

As it happens, Apple qualifies as one of our cheap, elite companies. It passes the profitability and growth tests easily. However, it’s not on the list right now because it’s not trading cheaply enough. 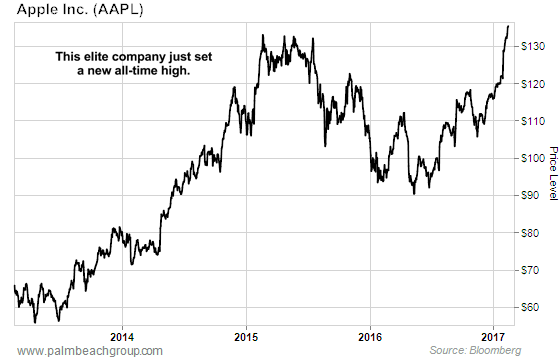 Over the past four years, this behemoth has doubled in price. This shows the power of holding quality companies for the long haul.

Consumer Prices Rising Fast: The Consumer Price Index, one of the Federal Reserve’s key measures of inflation, doubled its December rise last month. Increasing prices for energy (4%), apparel (1.4%), and new cars (0.9%) were the major driving factors. Most importantly, core inflation rose 2.3% from a year ago, signaling a rapid decline in the purchasing value of the dollar. There’s no doubt about it… Inflation is here. And now’s the time to hedge against it… check out this time-tested asset.

Japan Is Ready for the Blockchain: Japan’s national legislature just approved a bill that requires all digital currency exchange operators to register with the Financial Services Agency (FSA). Cryptocurrency specialists lauded the move as a strong driver for further widespread adoption of the technology. Compared to China’s aggressive crackdown on Bitcoin-based exchanges, Japan’s effort comes as a breath of fresh air on the world’s turbulent—but certain—path toward embracing cryptocurrencies. You can check out one of our favorite plays on this trend here.

Corporations Are “Optimistic”… Are You?: The political mood isn’t the only thing that’s shifted since Election Day. On a record 51% of earnings calls this past quarter, corporate executives used the word “optimistic” to describe their future prospects. This tone sits comfortably alongside an S&P 500 that’s set new highs for five trading days in a row, especially with 72% of the index’s companies reporting earnings growth. This all sounds great… but as we’ve noted recently, corporate earnings statements aren’t always what they seem.

In short: He believes a major crisis is on its way. Two of the three signals in his three-pronged warning system have already been triggered. And he predicts the third one will trigger this May. (The last time Jeff made a prediction like this, he was off by a mere few days.)

But here’s the thing: A market crash is EXACTLY what Jeff wants…

His unique trading strategy thrives in bear markets… In the financial disaster of 2008—while most were running for the hills—Jeff delivered 15 different triple-digit plays for his readers.

You can see why Jeff looks forward to a crash. And why you should, too.

If you missed it, you can watch the replay here. But act fast—it comes offline in a few short days. 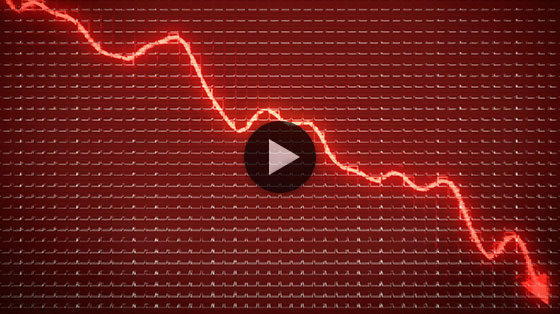