Despite over a year of lockdowns, remote classes, and temporarily shuttered dorms, some major universities are seeing record profits… and it’s all thanks to private investments.

University endowments – investments where donations fund the principal – have booked some of their biggest returns in decades.

For the year ending June 30, check out the performance of the following endowments:

With the S&P 500 returning 40.8% and bonds (as measured by the Bloomberg US Aggregate Bond Index) returning -0.3% over the same period, you might wonder how these endowments are generating record returns…

The answer is venture capital (VC).

That is, investing in startups, early-stage, and emerging companies deemed to have high growth potential and high risk… Otherwise known as “pre-IPOs.”

These investments are on pace to land their greatest returns since the dot-com era of the late 1990s.

Large university endowments managing more than $1 billion had an average venture allocation of 11%, according to a 2020 study.

Consider Michigan State’s endowment, another one that beat the S&P 500 over the same period mentioned above. CIO Phil Zecher said, “Our whole private investment portfolio did extraordinarily well with venture up over 100%.”

Today, I’ll show you why universities are becoming venture capitalists… and a simple way you can mimic their gains.

A big reason for these massive returns is that it’s more profitable for companies to stay private longer… So, when they eventually have their initial public offering (IPO), they’ll do so at much higher valuations. 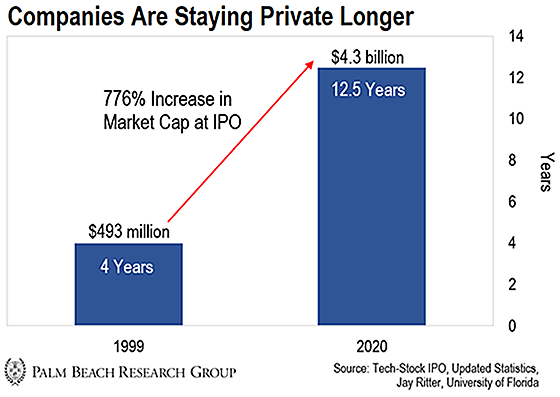 This makes private investments a no-brainer for universities looking for other ways to bring in capital that don’t involve hiking tuition, books, and housing fees…

So, there’s a huge appetite for fast-growing companies… and the returns have been massive:

And there’s a good chance this alternative asset class, traditionally reserved for uber-wealthy investors, is missing from your portfolio.

But that can change right now…

No Longer a Playground for the Rich

In the 1980s and ’90s, all you had to do was buy a diversified portfolio of private tech stocks and hold them. When you cashed in, you’d buy 10-year bonds with an average yield of 9%. And you’d be set for life.

Unfortunately, most of those opportunities were only available to wealthy investors and well-connected Silicon Valley insiders. Realistically, big VC firms sucked up most of the best deals.

However, recent rule changes by the Securities and Exchange Commission have opened the doors to this asset class for everyone… and 2021 is looking to be a record-breaking year for IPOs.

So far this year, we’ve seen 767 IPOs… breaking last year’s record of 480. Some of the biggest include Bumble, Robinhood, and Coinbase.

And as you saw above, early investors in pre-IPO companies can see massive crypto-like gains when they go public…

But the problem with investing in private markets is – unless you’re already wealthy or exceedingly well-connected – it’s difficult to get in these deals. And not every pre-IPO is a winner on IPO day…

The Clock Is Ticking

One way you can get into pre-IPOs is with equity crowdfunding platforms. For example, WeFunder, StartEngine, and Republic offer everyday investors the chance to participate in private company deals for, in many cases, as little as $100.

But finding a winning pre-IPO that’s worth your money can take a lot of time and effort.

So I’ll do you one better…

The man behind this deal is one of the most successful venture capitalists of our generation. Insiders compare him to Elon Musk and Richard Branson. And his previous 11 deals have built his billion-dollar fortune.

For a limited time, you can take part in this 12th deal – before its planned IPO on the NYSE.

But fair warning… By law, space in deal No. 12 is strictly limited. And it’s only available on a first-come, first-served basis. Once it’s closed, that’s it. It’s closed for good.

And the last time Teeka recommended a pre-IPO deal during an urgent briefing like this, it filled up in less than 12 hours… so I urge you to watch it now.

Universities across the country have turned to pre-IPOs because of their massive, crypto-like gains… and with deal No. 12, so can you.

Click here to watch Teeka’s urgent briefing. And learn how you can profit alongside one of the most famous venture capitalists of this generation.