When I first started investing in cryptocurrency back in 2016, I lost three bank accounts.

They refused to tell me why they kicked me out of their banks… In hindsight, the answer was obvious. At some point, I had used each bank to move funds into my Coinbase account.

At least six banks have rejected my applications to open accounts because – get this – I write about cryptocurrency.

But most people don’t know about the financial obstacles I’ve faced simply for conveying the idea of crypto as an asset class to my subscribers.

Over the years, I’ve been vindicated…

Some of the same banks that once rejected my accounts are now developing their own crypto products and services.

But the culmination of my journey in crypto research likely came earlier this month.

That’s when BlackRock – the world’s largest asset manager with $10 trillion under management – announced it was entering the crypto space.

BlackRock says its institutional clients want access to this space so badly that it’s teamed up with Coinbase to provide them an access point to crypto assets.

This announcement confirms everything I’ve been telling subscribers about how crypto adoption would unfold.

For years, I’ve told you institutions would eventually flood into crypto. And over the years, that is exactly what has happened.

First, we had family offices… then hedge funds… then banks… and now the world’s largest asset manager – an asset manager so large, it could swallow the entire crypto market ten times over.

Our Patience Is About to Pay Off

For most of the year, I’ve been cautious about jumping back into crypto during this bear market cycle.

Every time bitcoin has crashed, it’s needed a new cohort of investors to come and increase adoption. That process has generally taken a couple of years. 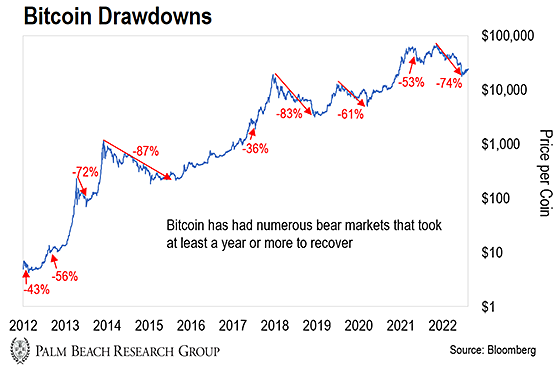 Looking back at previous bitcoin bear markets, they generally last 18–36 months. That’s why I was so cautious about committing large amounts of capital to the space right now.

Based on previous bear markets, it looked like we had at least another year or more to wait before we’d see the next big wave of new buying.

But BlackRock changes this entire dynamic.

By partnering with BlackRock, Coinbase will act as a gateway for thousands of BlackRock’s deep-pocketed clients. These are institutional clients that collectively manage $40 trillion.

I want you to ponder this…

In the last bear market cycle, we had to wait two full years before hedge funds and family offices started taking bitcoin seriously.

This time around, it’s taken less than a year. Bitcoin peaked in November 2021 and reached its current low in June 2022. Just six weeks after the low, BlackRock has decided the time to get in is now.

Now, BlackRock won’t onboard everyone overnight. But the fact it’s decided to come in now after a peak-to-valley drop of 70% shows you how serious it is about getting exposure to the crypto market.

That means this big drop hasn’t scared BlackRock or its clients away. Instead, BlackRock views this as a buying opportunity. And that’s a huge shift in sentiment.

In the past, firms like BlackRock would be dancing on bitcoin’s grave, declaring its death. Not this time.

This time, they’re using the weakness to buy.

I’ve always told you to watch what Wall Street does… not what it says. For years Wall Street maligned bitcoin, all while putting plans in place to eventually come into this market.

Long story short: This action suggests the crypto market should recover far faster than in the past.

I expect serious price improvements ahead. To be clear: That doesn’t mean we won’t see volatility… of course we will… it’s the nature of this asset class.

What the BlackRock news means is – and this is the important bit – the volatility will be short-lived.

So if we experience more volatility – and believe me, we likely will – I don’t want you to panic because we just got the biggest green light we could ever hope for.

The entry of BlackRock into crypto will lead to a brand-new adoption cycle that will take bitcoin to new all-time highs far faster than I had previously imagined.

And that’s why I’m ready to deploy capital back into crypto and why you should too.

This Is Only the Beginning

For now, BlackRock is opening its platform to bitcoin purchases only.

Remember, the bitcoin supply is completely inelastic. That means no matter how many people decide to buy bitcoin, you can’t make more of it outside of its preprogrammed supply schedule.

No other asset can make that claim. And that, my friends, is a big, big, big deal. Because as bitcoin goes, so goes the altcoins.

Remember, I talk about bitcoin a lot because you only need to get the bitcoin story right to get the rest of the crypto story right.

Just ask yourself this question: Do you think once these institutions get their feet wet with bitcoin, that’ll be enough for them?

The next crypto they’ll go into is Ethereum. And once they get a taste of Ethereum, they’ll start to position themselves in the smaller altcoins.

On average, bitcoin tends to outshine altcoins for about six months… But after that, the altcoin market catches up and then outperforms.

We saw it happen in 2016 and 2020… and I expect it to happen again. So don’t be surprised when BlackRock opens its platform to Ethereum and the wider universe of altcoins.

Friends, the two clear winners moving forward will be bitcoin and Ethereum in terms of lowest-risk, highest-reward assets you can own right now.

We already have financial giants like Fidelity and JP Morgan offering bitcoin services to their clients… and when BlackRock’s clients start buying BTC and eventually ETH, you’ll have wished you had picked up both coins when they were cheap, like right now…

If you want to get ahead of this crypto-buying tsunami, consider buying some bitcoin and Ethereum today.

A small position is suitable for most investors… and it’ll leave you plenty of room to profit when bitcoin and Ethereum soar higher in the months ahead.