I’ll be upfront with you: I have a favor to ask…

Tomorrow night at 8 p.m. ET, my good friend Jeff Brown is hosting his special Accelerated Profits Summit. And I want you to watch it.

During the event, he’ll show you how to pocket an extra $151,740 per year using his new proprietary trading system.

Now, regular readers know Jeff as a legendary Silicon Valley investor. You may also recognize his name from his appearances on CNBC, at conferences, or in other major financial programs or publications.

But that’s not all that makes Jeff one of the world’s leading authorities on high technology.

He’s also a rocket scientist… a former senior executive of tech giants Qualcomm and NXP Semiconductors… a Sloan Fellow… and a member of Washington, D.C.’s Chamber of Digital Commerce.

As a leading venture capitalist, Jeff is often the person who writes a start-up’s first check. And nobody has better insider knowledge of the tech market than he does.

So, my friends, I encourage you to watch Jeff’s webinar tomorrow night…

And if you register today, you’ll learn how to get a copy of his VIP-only report—An Insider’s Guide to Making a Fortune From Early Stage Tech Stocks—absolutely free. Plus, he’ll show you how to claim a $2,000 bonus.

To give you a preview of his summit, I asked Jeff to share today’s essay with you. It’s a must-read for anyone who wants to profit from early stage tech investing.

Most summers in Silicon Valley, venture capitalists (VCs) take advantage of the nice weather to vacation, play golf, and enjoy the beaches on either coast…

You see, the level of activity in early stage companies is typically very low in July and August. So the big VC firms tend to kick back and relax.

But let me tell you, hardly anyone is playing golf this year. In fact, I’ve never seen a summer this active.

2019 is shaping up to be a banner year for early stage technology investments. Record after record is being shattered.

This has enormous implications for the tech market. And investors need to pay close attention.

Now, I pay close attention to VC activity… Understanding where private firms are deploying capital informs smarter investment decisions when these companies go public. It also provides a lens into the most promising new technologies.

And for promising young tech firms, there’s never been a better time to raise private capital… 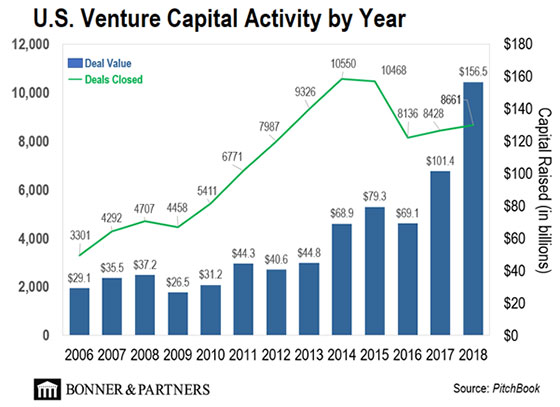 As you can see in the chart above, the amount of VC funds flowing into private companies has been steadily rising since the early 2000s. VCs raised $156 billion in 2018 alone—and 2019 is shaping up to surpass that record.

More importantly, 2019 has also seen record “exits” for VC-backed initial public offerings (IPOs). An exit is when a VC firm sells its stake in a company it backed while the company was private.

And the chart below from the National Venture Capital Association shows we’ve already seen $188.5 billion worth of VC exits in this year’s wave of IPOs. 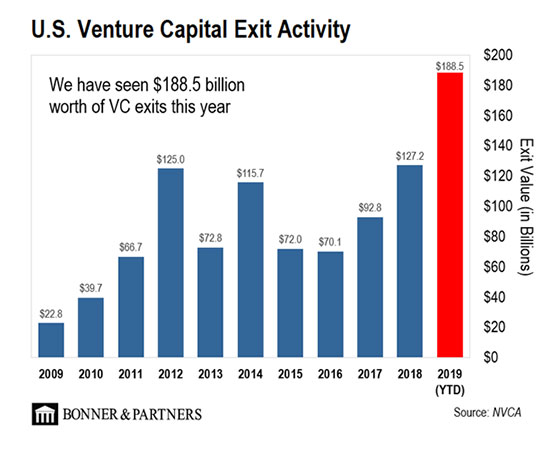 Now, I know many of you will ask: Why should I care about VC investments or exits?

The answer is simple…

Imagine you’re a Silicon Valley VC firm. One of your early stage deals just had an exit, and you received a big payout. What would you do with that money?

You’d recover your original investment—plus some additional profits to further grow the business—and set some money aside.

But you’d taked most of the profits you made and put it right back into the engine that created that wealth for you. And the limited partners (the individuals or funds that invest in VC funds) will likely do the same.

This is the virtuous cycle of early stage investing.

Those companies go public, offering VCs and limited partners an exit and everyday investors a chance to finally invest in those companies…

The cycle feeds off itself.

And right now, we’re seeing the benefits of that dynamic.

In 2016, I predicted we were on the verge of a massive tech IPO boom. Here’s what I said then:

[There is] a huge backlog of companies waiting to go public… And some are among the greatest technology companies in history. Think of it like a massive bottleneck… a dam ready to explode. 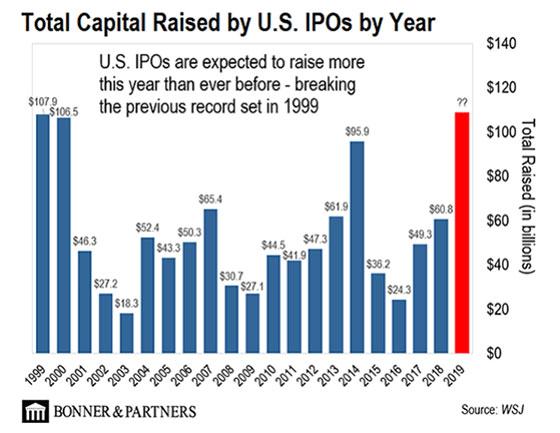 Ultimately, 2019 will be a banner year for tech IPOs. And that’ll give investors the chance to invest in the most exciting companies on the planet.

Companies like Uber, Lyft, Pinterest, and Slack have already gone public. For the first time in years, average investors will have the chance to invest in leading-edge tech companies simply by clicking a button in their online brokerage accounts.

And this trend is only picking up. Take a look at the total capital raised by IPOs since the start of 2018, broken down by month… 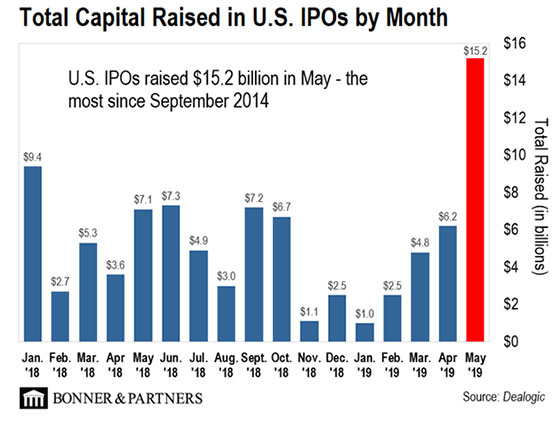 As you can see, May 2019 was a great month for IPOs. In fact, U.S. IPOs raised more money in May than they did from January to April, combined.

So what does this all mean for you as an investor?

It means that, for the first time in years, everyday investors will be able to invest in the best early stage tech companies on the market.

In my 30 years of working in high technology, I’ve never seen a market this robust. The amount of wealth creation we’re witnessing right now is extraordinary.

This is where the highest investment returns will be in the years ahead. And there’s never been a better time to invest in quality technology stocks.

P.S. There’s one more detail to this story that I didn’t have time to get to here…

You see, one subsector of the tech market has been overlooked for years. But I believe it has the potential for some of the highest—and quickest—returns available. I’m talking about doubling or tripling your original investment in months. The returns could easily be even higher.

And before you ask: No, I’m not talking about artificial intelligence, 5G, or blockchain technology. While I still love these technologies, this idea is something else entirely…

I’ll share all the details with you tomorrow, July 24 at 8 p.m. ET. All you have to do is reserve your free spot to my special presentation by clicking here.