Last week, I had the pleasure of keynote speaking at the two most significant psychedelic conferences ever held – Meet Delic in Las Vegas and Wonderland in Miami.

Between the two events, over 6,000 people attended – many of whom were public company CEOs who have not been able to gather since the pandemic hit.

It was clear that many strategic partnerships were being formed during the conferences, and there was an overwhelming spirit of cooperation that I’ve rarely seen in any emerging industry.

With its enormous market size, everyone realizes there is plenty of opportunity to go around in psychedelic medicine.

The Meet Delic conference in Las Vegas drew many of the West Coast’s psychedelic community and thought leaders. The buzz was electric about just how real this industry has become in such a short time.

Being that it was Las Vegas, the event had a very immersive feeling, featuring some of the latest virtual reality (VR) technology tailored for the psychedelic industry. It was such a success that tickets for Meet Delic 2022 are already available.

The Wonderland conference in Miami had a completely different but equally exuberant vibe, dominated by Wall Street firms looking to take their positions in the space. 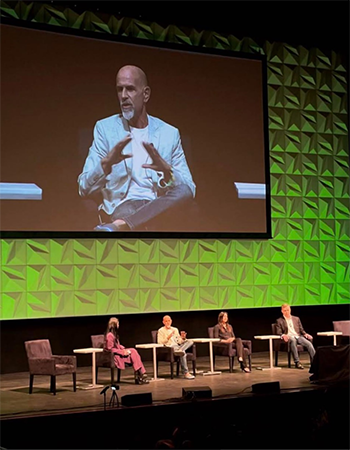 Zappy addressing the audience at the Wonderland Conference.

Other keynote speakers like Rick Doblin from MAPS (the Multidisciplinary Association for Psychedelic Studies), Dr. Matthew Johnson from Johns Hopkins University, and the top scientists using AI with psychedelics dazzled the crowd with their knowledge and real-world data.

The takeaway from these conferences is that the psychedelic space is emerging faster than anyone could’ve imagined.

And if there’s a silver lining to the pandemic, it’s that we all began to take the mental health crisis more seriously. That’s translated into more funding for psychedelic medicine research, infrastructure, and businesses.

I’m particularly excited about the psilocybin space. I believe, one day, these mushrooms will replace all of the antidepressants on the market.

This all has me very bullish about the psychedelics space. And in a moment, I’ll show you why I believe psychedelics will be the next trillion-dollar market.

But first, a little bit about myself…

Why I Was Chosen to Be the Keynote Speaker

For those of you who don’t know me, my name is Mike Zapolin… but all my friends call me Zappy.

At 23, I’d made it to the top on Wall Street and had become the youngest vice president in history at one of the most prestigious investment firms.

Over the years, I’ve met and worked with numerous celebrities, including Oprah Winfrey, Quentin Tarantino, Michelle Rodriguez, and Lamar Odom.

And as a futurist, I’ve been identifying megatrend categories for decades…

For instance, I was an early pioneer in the internet domain-naming industry.

I went on to own many of the world’s top domain names, including CreditCards.com, Music.com, and Diamond.com… I even had my own Super Bowl ad in 2000.

My knack for identifying early-stage trends naturally drew me to the psychedelics industry… And I’ve spent the last 15 years personally researching psychedelic medicines and their therapeutic powers.

My advanced insight into cutting-edge products and new investment opportunities in this space has earned me the nickname “Psychedelic Concierge to the Stars.”

And because of my extensive knowledge in the psychedelics space, the conference organizers invited me to give the keynote addresses.

If you weren’t able to hear me speak during those conferences, don’t worry.

We launched this newsletter because we believe it will help you profit from what Teeka calls his “next trillion-dollar trade.”

According to the World Health Organization, more than 800 million people worldwide suffer from mental health disorders.

And in 2019, the American Foundation for Suicide Prevention estimated there were 1.38 million suicide attempts in the U.S. alone.

Suicidal ideation is often the result of mental health conditions like depression, anxiety, stress, or trauma.

Right now, the U.S. government classifies psychedelics as Schedule I, which includes other drugs like marijuana and heroin.

But we believe the category psychedelics belong in – and will eventually be reclassified to – is Schedule III.

Here’s why we believe this reclassification is inevitable…

The FDA has been granting approval to psychedelic-based therapies for a few years now, and some states and cities have also legalized use. For example:

It’s all part of a greater sea change in sentiment that’s also brought cannabis to the forefront of medical research and legitimacy.

For instance, according to two separate polls from Gallup and Pew Research, about two-thirds of Americans now support cannabis legalization.

A Simple Way to Profit From Psychedelics

As you can see, we’re moving toward broader acceptance of psychedelic medicines and therapies. And we believe it’s only a matter of time before they become widespread.

If you want broad exposure to this space, consider the Defiance Next Gen Altered Experience ETF (PSY). It holds a basket of companies working on psychedelic and cannabis-based therapeutics.

These are early-stage companies on the very cutting-edge of the biotech space. That means there’s a significant risk that some will fail to see their therapies reach the mass market… but the PSY ETF spreads this risk out across many different companies in this space.

Remember, the psychedelics sector is still in its early stages, and many of the companies in PSY are speculative plays.

So do your homework. And don’t bet more than you can afford to lose.

If the Meet Delic and Wonderland conferences are any indication, the mainstream is finally catching on to the benefits of psychedelic medicine. And as more cities and states legalize their use and research…

It’s only a matter of time before the U.S. government follows their lead and legalizes access to these life-changing medicines.

P.S. While I’m the psychedelic concierge to the stars, Teeka is unarguably the most-trusted man in crypto…

And he recently uncovered what he’s calling “the investment of the decade.”

It’s a cryptocurrency surging toward a trillion-dollar market cap… and it has nothing to do with bitcoin.

To learn more about this breakthrough crypto and the handful of altcoins that will ride its coattails to the top… click here.