Bill Ackman is one of the smartest investors we know of.

On Tuesday, he finally admitted to one of the dumbest investment mistakes we’ve ever seen…

Ackman has run the Pershing Square Capital fund since 2005.

The fund takes concentrated positions in just a few companies. Rarely does his $15 billion portfolio own more than 10 positions.

Ackman has done quite well with this strategy. In the 12 years he’s run the fund, he’s doubled the returns of the S&P 500.

Now that sounds good until you consider this…

He would have tripled the S&P 500 over that span if he hadn’t violated two important rules every investor should abide by.

By breaking these rules, his portfolio crashed nearly 25%… and reduced his stellar performance by a third.

Here’s why we’re telling you about Ackman’s blunder.

Over the past week, we’ve shown you how to beat the market by following the smart money.

But you can also avoid big losses by learning from their mistakes.

In a moment, we’ll tell you what these two simple rules are. But first, let us show you how one of the brightest investors of our time blew a $4 billion hole in his portfolio.

How a Good Idea Turned Into a Terrible Mistake

In February 2015, Ackman purchased Valeant Pharmaceuticals (VRX). The purchase comprised just over 25% of his portfolio.

At the time, it seemed like a good idea. Valeant had amassed a large portfolio of profitable drugs.

According to Bloomberg, Ackman bought VRX at $196.72 per share. About five months after his purchase, shares peaked at $262.50.

But there were two problems: Valeant took out massive loans to buy the rights to sell these drugs, so it was overleveraged. Plus, the company was accused of using questionable accounting practices to overstate revenues.

After the accounting scandal broke in 2015, the wheels came off… 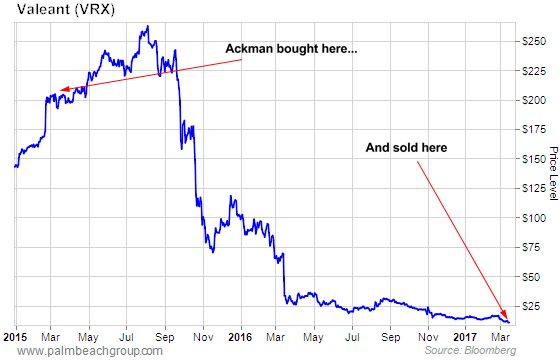 Ackman rode VRX all the way down to $11. He finally threw in the towel Tuesday and sold the position after a 96% loss.

You’d think a guy as smart as Ackman wouldn’t take a bath like that. But even the best investors get emotionally attached to their trades and refuse to admit they were wrong.

If you’re concerned that your emotions will override your better judgment—or you just aren’t sure when it’s time to cut your losses—we’ll show you two simple steps you can take to protect you from yourself.

How to Avoid Becoming Poorer

Ackman broke two important rules that we stress here at the Palm Beach Research Group: He didn’t position size properly, and he didn’t have an exit strategy.

If he followed these two rules, he would have saved his clients $4 billion.

Here’s a quick breakdown of both:

Now, let’s see how these two rules would have prevented Ackman from losing $4 billion on Valeant…

The Anatomy of a Portfolio Crash

At one point, VRX was over 30% of Ackman’s portfolio. That was his first mistake. And it cost him dearly.

If Ackman stuck to our first rule of position sizing, VRX would have made up no more than 5% of his fund.

Once Ackman had properly sized his position, he would then implement a stop loss for further protection.

Doing this takes all the guesswork out of exiting your positions. It lets your winners run and cuts your losers short. That’s the recipe for making money in the stock market.

As far as we can tell, Ackman didn’t have an exit plan… We doubt his plan was to sell after the stock plunged 96%.

If Ackman had put a trailing stop on VRX, he likely wouldn’t have lost any money.

A trailing stop loss could have saved him (and his investors) over $4 billion.

Use Ackman’s mistake as a lesson in risk management. Never put too much of your money into one position and always have an exit plan.

These two rules will ensure that a single bad investment doesn’t destroy your entire portfolio.

Editor’s Note: One way to get richer every day is to avoid making yourself poorer. Position sizing and stop losses can help you do that. Do you use these two measures to protect your wealth? Let us know right here…

Globalization has won the latest round in its battle with populism…

Dutch politician Geert Wilders has been called the “Dutch Trump” because of his nationalist policies. On Wednesday, his party lost in the national elections.

The European stock market apparently liked the result. As you can see in the chart below, the Euro Stoxx 50—which tracks 50 of the largest European companies—was up big on the news. 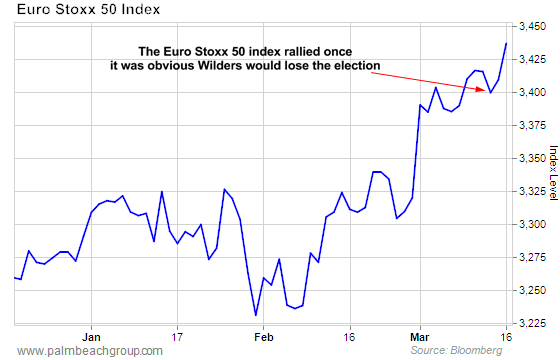 But the fight is far from over…

If right-wing leader Marine Le Pen can pull off an upset in the upcoming French elections… or if the nationalist party gains momentum in Germany, the market could easily reverse.

Editor’s Note: Last Friday, the Securities and Exchange Commission (SEC) rejected a proposal for a bitcoin ETF. The price of the cryptocurrency plummeted on the news but quickly rebounded. PBL analyst Greg Wilson explains why the decision was a non-event.

The SEC’s ruling on the proposed bitcoin ETF has come and gone.

In case you missed it, the SEC rejected the Winklevoss twins’ proposed ETF because “the Commission believes that the significant markets for bitcoin are unregulated.”

It’s ironic because the reason many people are drawn to bitcoin is that it’s decentralized and unregulated.

There are two takeaways from the SEC decision…

The first is that headline events in bitcoin provide a good buying opportunity. (The People’s Bank of China’s “crackdown” in early January is another good example. Bitcoin dropped 20% on the news.)

The second is that if you were waiting on an ETF to buy bitcoin, you could be waiting for a long time.

Our message is: Don’t wait for an ETF. Go out and buy bitcoin today.

Editor’s Note: Bitcoin isn’t the only cryptocurrency surging to new highs. Our subscribers have had the chance to make 22.9%, 195.7%, and 230.8% profits in 90 days from the fastest-growing cryptocurrency plays in America. And over the next 60 days, we think your profits could be even bigger.

The “experts” who failed to predict the Nasdaq crash… the housing bust… the panic of 2008… and told you Hillary was a “lock” for president are now saying: “Prepare for a financial crisis.”

Once again, they’re dead wrong, and following their advice will cost you dearly… 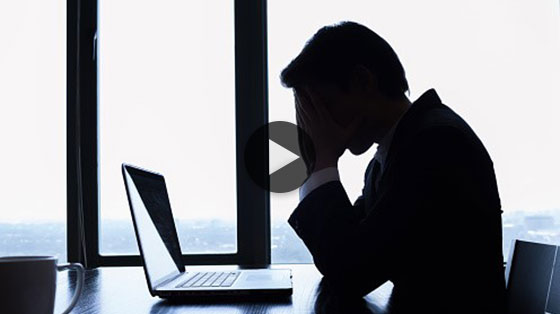