This investment is a “no-brainer.”

That’s the word from Mohnish Pabrai.

Regular readers may recognize that name… Back on April 6, we called Pabrai the best value investor you’ve never heard of.

As a recap, over the past 25 years, Pabrai has clobbered the S&P 500’s returns by 6.3% annually. That’s a record very few people can match.

That type of success is expected. After all, Pabrai’s idol is Warren Buffett—whom many consider to be the world’s greatest investor.

Here at the Daily, we search high and low for great investments. One way we do that is by following the world’s greatest investors. If these guys are putting millions (even billions) to work… then they’ve done as much research as humanly possible.

Today, I’ll tell you what Pabrai and Buffett are buying… and more importantly, how we can piggyback off their research and profit alongside them.

Over the past few months, Pabrai has initiated new positions in India—specifically, the financial sector of this emerging market.

India is one of the fastest-growing countries in the world. GDP has grown by an average of 7% per year since 2012 (compared to 2.3% for the United States and 6.6% for China).

Recently, researchers at the Center for International Development at Harvard University projected that India will remain the fastest-growing economy over the next decade. So there’s still plenty of upside.

Pabrai put it best during a May 2018 lecture at Columbia University. Here’s what he said:

As India rises, it is a no-brainer that people will want good housing and it is a no-brainer that they will have to finance it because there is no way that they can just buy it with their income levels… The housing finance sector will grow at 3 or 4 times GDP growth. So, if India is growing at 7%, the housing companies may be growing at 20 to 30%.

In other words, India’s growth will fuel an economic boom, especially in the housing industry. That’s what Pabrai is banking on.

In June, Pabrai said that 40% of his portfolio consists of Indian stocks. That’s a huge bet… And guys like him don’t make big bets without doing their research first.

Pabrai’s favorite way of playing the Indian housing boom is through Repco Home Finance… According to a recent disclosure, he owns over 32 million shares. That’s about 5.2% of the company.

Buffett’s Berkshire Hathaway also made a big bet on India. It recently took a 3–4% position in Paytm, a leading Indian financial firm.

Many expect current Berkshire investment manager Todd Combs to take over as chief investment officer when Buffett leaves the company. Combs is joining Paytm’s board. That’s a major vote of confidence.

Imagine a company adding Warren Buffett to its board. That’d give the company a lot of credibility. As Buffett’s successor, Combs has that same credibility.

We still have time to follow these great investors into India.

Now, you can’t buy the same stocks as they did… unless you have access to the Bombay Stock Exchange or private markets in India.

For most investors, the best way to gain exposure to this fast-growing market is through an exchange-traded fund (ETF).

The one with the most exposure to the Indian financial sector is the iShares India 50 ETF (INDY). It holds the 50 largest companies in India.

More significantly, 35% of the fund invests in India’s financial sector… which will allow you to ride the coattails of Buffett and Pabrai to profits.

Readers disagree with our view that the stock market would have probably done as well if Hillary Clinton won the presidency as it has done under President Trump (see September 20 issue, “This Country Is in Political Crisis—Buy it Now”)…

From Wayne S.: Sorry, Nick… but I don’t agree with several of your conclusions in the Daily issue about Brazil.

There was scant “uncertainty” prior to 2016. We were stuck with a Democratic administration that sought to replace capitalism with socialism. Excessive regulations stymied the opportunity to profit.

Hillary’s election would have caused the country to struggle to exceed 2% growth as it had been doing the previous eight years. Trump has abolished many regulations, renegotiated trade agreements, and made significant tax cuts. That’s all shown in the chart following his election in November 2016.

By the way, Brazil is NOT a good buy at present. You’ve forgotten the “falling knife” rule. Let’s wait until we see some political stability and a market turnaround before investing in Brazil. There is opportunity, but not just yet.

Nick’s Reply: Unfortunately, Wayne, we can never know who will be right in this argument. It’s like debating who was a better basketball player in their prime, Jordan or LeBron… There’s no way to come up with an answer because there’s no way to test it.

But the crux of your argument seems to be based on the fact that GDP growth was slower during President Obama’s years. I’m going to show you a chart of real GDP growth. Real GDP growth adjusts for inflation… so it’s the amount the economy actually grew… It’s the number any serious economic analyst uses to judge growth. 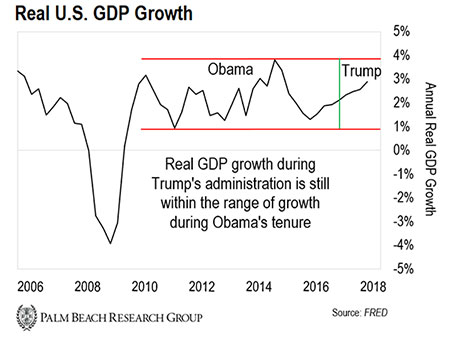 Now, we’re not going to credit Obama with the 2009 numbers—he came into a crumbling economy that didn’t happen under his watch. So look at the range of real GDP growth from 2010–2016—the seven years he oversaw a “normal” economy. I marked the high and the low points of the range of growth.

I’m not taking political sides here… Just pointing out a fact. Both sides of the aisle in Washington are spewing “alternative facts.” Trump having better GDP growth than Obama is one of them… so far.

From John D.: Nick, President Trump wants to build a wall to keep out ILLEGAL immigration… not ALL immigration. Comments like those you made in this essay just perpetuate the mainstream media “fake news” perspective.

Do you think the current bull market would have continued no matter who was elected president? Let us know right here…

For the first time in 26 years, Silicon Valley insider Jeff Brown is revealing “The Brown Blueprint.”

He’ll also tell you why he believes over 100 tiny tech stocks will start to soar 100%-plus after November 14, 2018… and about the new technology that will power them.

Learn how to get your copy right here… 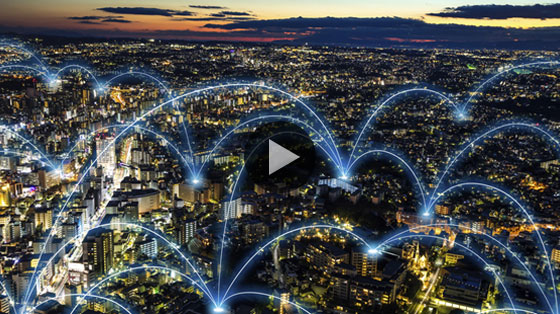