Nick’s Note: It’s been a bloodbath in the crypto market over the past month. Bitcoin has been down as much as 69% from its all-time highs… and other coins have seen even larger drops. Many investors are panicking over the pullback.

Below, Palm Beach Research Group guru Teeka Tiwari explains why this crash is temporary… and how this new asset class will bounce back even stronger…

You’d have to be living under a rock not to know about the vicious sell-off currently going on in the cryptocurrency market.

But what you might not know is that this type of volatility isn’t new.

Even as recently as last March and September, we dealt with similar market meltdowns. What was especially tough for us was that our most important positions actually ended up dropping far lower than the general market.

It was a bloodbath.

Hackers attacked Ethereum—my most important position… and the one I had staked my reputation on—every day. I can’t count how many times Ethereum forked its code to deal with various attacks.

Aside from the normal angry emails we receive when prices are tanking, I received many mocking emails from “friends” reveling in my perceived “misery.” More than one asked, “How are your ‘tulip bulbs’ doing?”

Then, like now, I knew the slings and arrows of the market would ultimately strengthen the entire crypto asset ecosystem.

Whether it was hackers trying to destabilize the Ethereum network or the Chinese government trying to ban exchanges, I’ve always known that the decentralized nature of crypto assets makes them very resilient to external threats.

That resiliency is what attracted me to bitcoin in the first place.

For example, in 2013, the Chinese government banned its banks from dealing with bitcoin. This was at a time when 90% of all bitcoin mining and the majority of bitcoin activity took place in China.

On top of that, hackers broke into the world’s largest bitcoin exchange at the time (Mt. Gox) and stole nearly 850,000 bitcoin.

Bitcoin dropped 80%… But it still refused to die.

I knew that any asset class that could survive so much negativity had to have long-term value. Since then, of course, bitcoin has been as high as $20,000.

Now that bitcoin has dropped to about $7,000, does that mean the party is over?

Technology Has a History of Fits and Starts

I’ve been fortunate enough to meet many bitcoin millionaires—some now billionaires—who lived through bitcoin’s 80% drop in 2013.

I asked what kept them in bitcoin through the negativity. After all, they had made fortunes from bitcoin… So why stick around?

What separated them from the hordes of “investors” who sold was their unswerving belief that the world needed a practical alternative to fiat currency.

Bitcoin is the first currency that can’t be devalued by a government. It’s the first asset that we’ve had complete ownership over.

It’s the most difficult asset to seize in the world. Barring torture, there isn’t a government in the world that can take your bitcoin from you (assuming you’ve stored it securely). That makes bitcoin—and crypto assets overall—unique.

In my opinion, bitcoin’s unique qualities will continue to create value for its holders. But it won’t move in a straight line. No asset ever moves in one direction.

Even the biggest stock winners of the last two decades—Microsoft, Apple, Google, and Facebook—had long periods of price drops, price consolidations, and fears about their long-term viability as businesses.

In the 1990s, the government tried to break up Microsoft. Apple traded for barely the cash on its balance sheet in 2003 as people failed to see the significance of the iPod. In 2007, Google dropped 70% as investors thought it couldn’t survive the Great Recession. And Facebook dropped 50% right out of the gate when it went public.

Just like those tech giants, bitcoin and crypto assets are now under a global microscope.

More Scrutiny Is Not a Bad Thing

China wants nothing to do with cryptocurrencies. And banks are banning the use of credit cards to purchase them. (That’s actually good news. As I’ve said before, you should never borrow money to fund a crypto investment.)

Even the G20 (a group of 19 major national economies and the European Union) is threatening to take cryptos more seriously.

All of this scrutiny has people scared that we’ll see a coordinated global effort to snuff out bitcoin and crypto assets.

I believe this fear is overblown.

Global governments have much bigger problems than bitcoin. The idea that they’ll all join hands and put their differences aside in the relentless pursuit of crushing bitcoin appears farfetched to me.

Instead, we’re seeing the maturing of the crypto asset class.

None of this is inherently bad. For cryptos to make the leap to a multitrillion-dollar asset class… some form of regulatory framework must be in place.

I think it’s an overreaction to assume that all governments want to destroy the crypto asset market.

Even if they wanted to, the decentralized nature of bitcoin and other crypto assets makes it impossible for governments to eliminate them (just ask China).

Governments can certainly make things more difficult by shutting down the exchanges. But as we’ve already seen, even when the most important market in the space—China—decided to shut down its exchanges, other countries such as Japan welcomed the Chinese exchange operators with open arms.

The Crypto Genie Is Out of the Bottle

Governments can wail and gnash all they want… but nothing will remove cryptos from the market. The asset class is here to stay. And I think U.S. regulatory bodies understand this reality.

That’s why I think the CFTC and SEC hearings will be more concerned with curtailing initial coin offering (ICO) fraud than trying to kill all things crypto-related.

The CFTC approved bitcoin futures this past December. It would hardly make sense for it to greenlight futures and then expend resources to destroy the asset class.

That’s why I think the current regulatory fears washing through the crypto markets are overblown. Just like they were during the many scary periods I went through with cryptos in 2017.

Then, like now, I offered the same advice: Make sure you have rational position sizes. Stop checking prices. Don’t worry about how long this sell-off will last. No one can answer that question with anything more than a guess. (That said, I’m currently working on an essay that will offer my best guess.)

I’ll leave you with this…

The biggest mistake I made in the decades of the late 1980s and ’90s was to underestimate just how powerful an impact technology would have on the future. I under-owned—and sold too quickly—some of the biggest winners of the past 25 years.

I’m not going to make that mistake twice.

The blockchain and crypto assets are a new breed of technology that will have as much (if not more) of an impact on the world as the tech companies of the 1980s and 1990s have today.

From Donald B.: For the last two weeks, almost all cryptocurrencies have been crash-diving by double-digit percentages nearly every day. At this point, I can’t see any sign that this carnage is dissipating.

The crypto market peaked on January 13 at just under $743 billion. Gee, it’s only down 52.76% since then. On January 13, we were all checking the prices of Irish castles, Lamborghinis, and out-of-work starlets… But as usual, most dreams fade.

By the way, I took all of my original investment out last November, so I’m playing with house money. I guess I have no right to [complain] if I made money. But this is not a drawdown… This is a PANIC!

From Elmar S.: I’m a little anxious about the current bitcoin crash. Bitcoin lost 31.3% in value in one week and 12.1% at the time of this writing. I know cryptocurrencies are very volatile… but the situation seems to have no end. It feels like a race to the bottom.

My question is this: Is this current situation just a little tempest in the teapot, or is there something more serious going on?

From James W.: I just wanted to thank Teeka for all the time and effort he spends on this new asset class… I’m a farmer in Illinois and it has become difficult to carve out a profit in corn and soybean sales the past couple years.

I had been looking for a way to keep my farm going while creating a new source of income… I found my answer in cryptocurrencies. I have taken a few thousand dollars and turned it into $2.5 million since May 2017—almost entirely by following your advice. The farm is still producing and my employees still have jobs, thanks to you.

From Natasha S.: Teeka, my favorite way to disconnect from the market is by meditation. I used to meditate daily, but now I meditate twice a day and it keeps me grounded and long-term goal oriented.

From Sandra A.: This pullback is getting scarier and more severe every day. Teeka, some words are in order… This is beyond bad.

From Ravi K.: This crypto correction/crash looks very different from the ones we saw in 2016 and 2017. My portfolio is down by around 75–80% and looks like it will go down further as there is more negative news coming in.

I read that the Securities and Exchange Commission will investigate cryptos as an asset class. What do you think about that?

Nick’s Reply: Hi Ravi… My crypto account has fallen over 50% as well. It’s something I’ve talked to Teeka about… He says to stick with the plan and hold tight. I have an interview coming up with him soon… and I’ll pass along your question. Stay tuned for tomorrow’s Daily…

Tonight at 8 p.m. ET, we’re airing the biggest event in the history of our firm.

It’s called the Legends of Finance Summit. And it will reveal the entire story behind longtime PBRG friend Bill Bonner’s bold “Trade of the Century.”

Bill will be joined by legendary speculator Doug Casey for their first-ever online summit.

The summit will be unprecedented in yet another way… because “billionaire beater” Chris Mayer and crisis investor Nick Giambruno will also discuss six urgent ways to profit from Bill’s "Trade of the Century" concept.

The best part? Attendance is free—so click here to reserve your spot today. 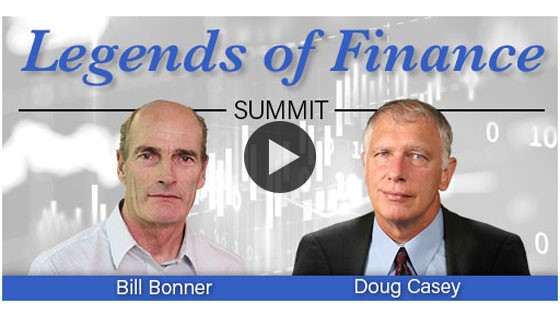