The crew hit up all the big stores—Kohl’s, Toys “R” Us, Target, etc. She was on the hunt for Legos and Nerf toy guns for her 11-year-old son. But Amy didn’t count on the stores having the best prices for the gifts she wanted. So, she brought along her secret weapon—a smartphone.

“I always check with Amazon and if it’s cheaper, I will always order it,” Amy said.

Amy and her friends are a new type of shopper—the “omni-shopper.” Omni-shoppers check multiple channels for the best prices.

That’s what omni-shoppers do. They shop in-store and online simultaneously. It’s rapidly becoming the dominant form of shopping in the retail sector. But it’s not a trend you’ll hear about in the mainstream media.

That’s why you turn to us… We find profitable trends before the crowd gets wind of them. By staying ahead of the herd, you can make money in the markets.

While most investors will be lamenting the “death of retail” or looking for the next hot online retailer… we’ll follow the omni-shopper to profits.

The Growth of the Omni-Shopper

The survey found that more than 64 million people shop both online and in-store. These are the omni-shoppers. 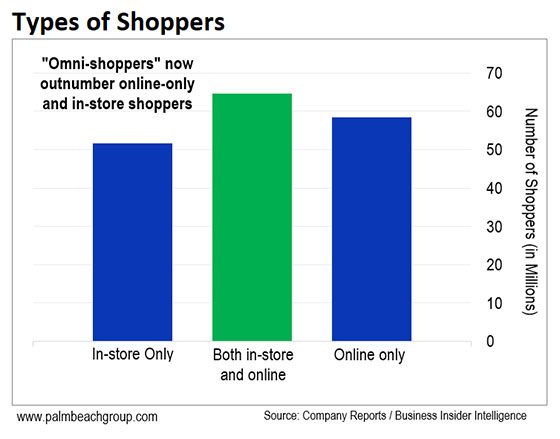 As you can see, six million more people used a mixed shopping strategy rather than sticking to just one.

Retailers are trying to get in front of this trend. That’s why Amazon bought Whole Foods this year—to get a physical footprint for shoppers.

The retail model of the future is a combination of physical and digital storefronts. The companies that will thrive going forward will have both.

It won’t be Amazon. There’s no doubt Amazon dominates the online space. It gets about 50% of all online purchases.

But another store is beating them to the omnichannel: Walmart.

Walmart might seem a surprising choice for omni-shoppers. It’s a distant second to Amazon, with only 14% of all online transactions.

But Walmart has a key advantage over Amazon—storefronts.

With 4,672 U.S. stores, Walmart has more physical locations than any other retailer in the country. (Amazon has only 470 storefronts if you include Whole Foods.)

To leverage all those storefronts, Walmart bought e-commerce company Jet.com for $3.3 billion in 2016.

According to the International Council of Shopping Centers, 81% of shoppers who pick up their online orders at the store end up purchasing more stuff.

So, Walmart will also get a boost from people who order online and then come in to retrieve their items.

In October, we told you Walmart was working on a pilot project in Oklahoma that allows you to order your groceries online and pick them up at a giant kiosk at the store.

Walmart says the new kiosk will cut shopping times from hours to just a few minutes. And the strategy appears to be working. Walmart’s up 18% since then. 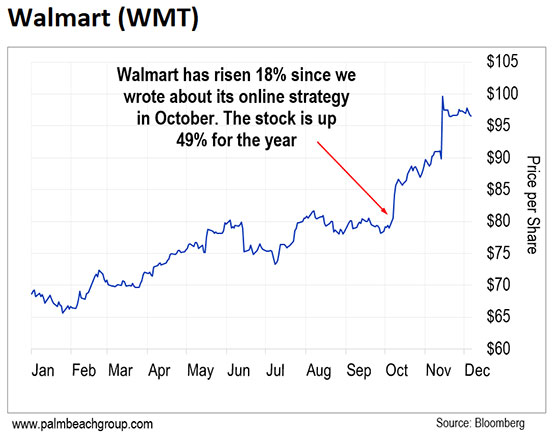 Adapting to a New Environment

For years, investors avoided Walmart. The old, stodgy retailer was late to the online game… Its website was hard to navigate… And it didn’t offer free shipping.

But Jet.com turned out to be a perfect match. Since buying the website, Walmart’s e-commerce sales growth has soared. 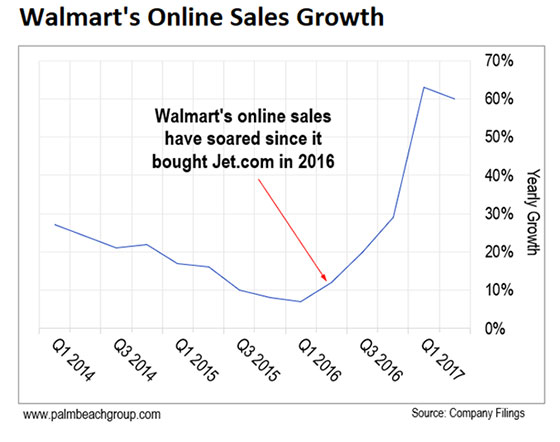 Walmart is adapting to the new omni-shopper. That’s the reason its stock has run up so much this year.

We’re at the beginning of a massive change in how people shop. Look for Walmart’s stock to keep rising as it entrenches itself as the leader in this space.

From Jeff J.: What’s happened to Tom Dyson and Mark Ford? I haven’t received a single email from either of them for almost a year.

From Ronny R.: I first signed up to the Palm Beach Research Group for the guidance of Mark Ford and Tom Dyson. Mark showed us how to build wealth safely with smart investments. I also enjoyed his more practical advice such as how to succeed as an employee.

It’s like there was a palace coup… One day Tom and Mark are there; the next day it’s all Nick and Teeka.

I’m concerned that safety has been replaced with more sensational investment advice like cryptocurrencies. Your feedback on the company’s direction would be appreciated.

From Scotty J.: I was just wondering what happened to Tom Dyson and Mark Ford. I miss hearing from them, especially Tom. Mark used to write about how you couldn’t get rich by investing only in the stock market. I really loved his advice.

But thanks to Teeka Tiwari, I’m getting cryptocurrency rich. He’s great. I can’t imagine anyone who has helped me personally more from a financial standpoint. A big thank you to everyone at PBRG.

Editorial Director Lindsey Hough’s Reply: Thanks for the feedback guys. We’ve received lots of question about Tom and Mark’s whereabouts. Here’s an update…

Mark wanted you to know that although he’s finally getting ready to retire at the end of this year, he is still currently writing… but for a small, private blog that only a few people read.

It includes articles on wealth building and entrepreneurship, as well as personal entries. He’ll also continue to talk about his own personal investment portfolio.

And it’s all completely free.

If you would like to keep in touch with Mark, you’re welcome to visit: https://www.markford.net/.

Tom has taken a role behind the scenes working with our editors and analysts. He remains an important part of our company.

As you can see, we still believe that real, sustained financial prosperity can only be achieved through a comprehensive wealth-building strategy.