You’re taking your date to see a movie. But you’re running late.

The film is about to start in 10 minutes. And when you get to the theater, the parking lot is full.

You circle the lot for five minutes looking for an open spot. No luck.

Your date is throwing some serious shade at you. She doesn’t want to miss the opening credits. And boy, if you do, you know this won’t end well…

Most Daily readers have likely found themselves in a similar situation.

Maybe you were running late for a job interview, a doctor’s appointment, or a court date… and you found the parking lot packed.

Being late could result in a missed job opportunity, rescheduled appointment, or court fine.

In the near future, you won’t have to worry about that.

BMW is building a car that can park itself…

You can drive the car to the store and tell it to find a parking spot… and it will on its own. When you are finished shopping—or watching a movie—the car comes to you.

(You can watch a video of BMW’s self-driving car in action right here.) 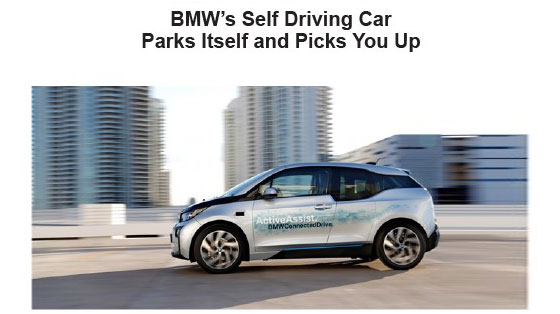 BMW’s self-parking car is part of a larger trend in autonomous vehicles.

According to Transparency Market Research, the self-driving car trend will be worth more than $132 billion by 2019. The company expects the market to grow at a rate of 35% annually.

This market is going to be huge.

At the Daily, we’re always looking for big ideas that can make you richer. And playing a hot trend is definitely a big idea.

Here’s the thing… Every automaker is getting into the self-driving car race.

We don’t know if the winner will be BMW, Tesla, Mercedes-Benz, Ford, Honda, or some new entrant that doesn’t even exist yet.

But we do know this: All self-driving cars will need microchips to operate. If you want to safely play this trend, that’s the place to start…

A World of Driverless Cars

Right now, there are 2 billion cars in the world. Eventually, every single one of them will be autonomous.

It’s only a matter of time until you can just input your destination and take a nap in the driver’s seat.

Over the past two days, we’ve told you about the growing trend in social media. And we said the safest way to play that trend was to buy companies like Intel and Cisco.

Those two companies supply the “tools” (microchips and routers, respectively) necessary for any social media company to operate.

We call these types of companies “pick-and-shovel” businesses. The analogy comes from the 19th-century gold rush.

The guys who supplied picks and shovels to the miners made money regardless of whether miners went boom or bust.

In order for self-driving cars to operate, they need “robot brains.”

Robot brains are the tiny microchips that allow cars to “think.”

One of the biggest players in this space is Nvidia (NVDA).

It makes the Drive PX 2 computing platform. The computer uses the car’s cameras as “eyes” and processes the data for the car’s “brain” to make decisions.

And according to road tests, the computer is already a better driver than humans.

The Drive PX 2 can process data from multiple sensors in real time. And that provides 360-degree detection of lanes, vehicles, pedestrians, signs, and more.

This makes Nvidia a true pick-and-shovel company for this trend.

We hold NVDA in our Palm Beach Letter portfolio. And it’s up 313% since we added it in December 2015. Even though we’re already up big, you should absolutely put NVDA on your radar.

It’s a little expensive right now… The stock just jumped $30 in the past week off a great earnings report. But you can consider adding NVDA to your portfolio the next time it pulls back 20%.

P.S. Driverless cars isn’t the only trend pushing Nvidia higher. It’s also a pick-and-shovel play for computer gaming—a trend that’s projected to grow more than 5% per year going forward. And it’s a major player in the growing virtual reality space. NVDA has a long growth runway ahead of it.

Are there any big trends you think we’re missing and would like to see us cover? If so, let us know right here…

Two of the five biggest companies by market capitalization in the United States are Google and Facebook. But these two companies don’t have many “tangible” assets like oil rigs or factories.

Most of their value is derived from user interfaces. And that’s a hard concept for most people to wrap their heads around.

In today’s must-see 3-Minute Market Minder (transcript included), Palm Beach Letter editor Teeka “Big T” Tiwari says the successful companies of the future won’t be valued by their tangible assets… but by how they can deliver value.

Teeka’s attending a conference in Silicon Valley and meeting with some of the brightest minds in the tech space. Many of them are bullish on the blockchain’s ability to deliver value in new ways we haven’t even thought of yet.

Even if you still have a hard time understanding the blockchain, Teeka says to keep an open mind about it. Like the internet back in the 1990s, the blockchain will be a lot bigger than we can currently imagine…

Future Employees Will Be Cyborgs: Home supply retail giant Lowe’s recently announced it’s testing a robotic exoskeleton on some of its warehouse workers. The futuristic, non-motorized technology is designed to ease muscle and joint strain for employees who spend their days lifting heavy objects.

According to one report, “the exoskeleton fits like a rock-climbing harness and has rods that sit along the spine and thighs. When an employee squats down or bends over, these rods collect potential energy. That energy is then transferred back into their back and legs when they stand up, allowing them to bear greater loads than they could on their own.”

Sounds like a case of “if you can’t beat the robots, you might as well join them.”

Currently, most games accept fiat currencies like dollars or euros to play. Gamers can use the money to buy additional lives or accessories, or in the case of online games, for betting. Now, gaming operators want to cut out the middleman and allow players to use cryptocurrencies like bitcoin. Players like cryptocurrencies because they don’t have to worry about exchange rates or constant conversions. This is just the latest example of cryptocurrencies and their underlying blockchain technology completely revolutionizing an entire industry…

Editor’s Note: Workplace automation and cryptocurrencies are just two exciting trends we’ve been following for months. But we’re always on the lookout for big ideas to help you get richer every day.

With increased military tensions around the globe, defense stocks will continue to climb. The biggest winners in the coming spending spree won’t be the industry giants.

Thanks to a new government program, these four small-cap defense companies could see returns of over 1,000% in the coming years. Learn more here. 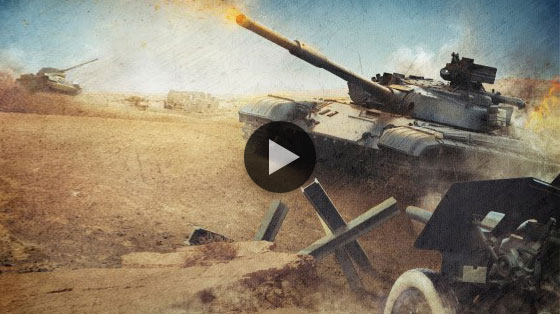