“When I see a bubble forming, I rush in to buy, adding fuel to the fire.”

George Soros is a former hedge fund manager… and one of the world’s most well-known investors. He uttered that contrarian wisdom in a 2009 interview.

He’s used it to help amass a $25 billion fortune.

While Soros was at the helm, his Quantum Fund averaged returns of more than 30% annually during its first 30 years.

Now, Soros’ politics might turn some people off… We don’t agree with most of his views here, either.

But don’t let politics get in the way of making money.

When Soros says something about the markets, it’s worth listening to. And what he has to say about market bubbles is more relevant now than ever before.

We’re in the midst of an eight-year-long bull market… It’s the second longest in the past 70 years.

The mainstream press believes the bull market is now in bubble territory…and that you should get out before it bursts.

They’re wrong… on both accounts.

In fact, I showed you that the market actually isn’t that expensive in the June 27 Daily.

But I will admit… the doomsayers might be onto something.

A bubble may be forming in the stock market.

But you don’t sell when the bubble is forming. That’s when you should be buying…

When a market’s price is inflated compared to its intrinsic value, that’s usually a sign of a bubble. Investors bid up prices because they expect incredible returns when they sell.

The bubble bursts when prices suddenly drop, which leads to panic selling.

As I’ve written in the past, we’re not in a market bubble. But even if one is forming, selling would be the wrong thing to do right now.

I know this goes completely against what most people think. Pundits have told us to avoid bubbles. If we see one forming, get out.

But these guys don’t have a fraction of the wealth that Soros has.

However, we need to make a distinction between a fully formed bubble and a bubble that’s forming.

A stock market bubble forms when prices can’t be justified by fundamental analysis.

Today, the S&P 500’s price-to-earnings (P/E) ratio is 24. That’s above its historical average but not that much higher than its 20-year average.

Based on that, a bubble might be forming, but it’s not here yet.

If that ratio climbs past 30, we can start entertaining bubble talk.

Now, a fully formed bubble can be tough to recognize. It’s impossible to time the top of a bubble. Many have tried… Many have failed.

That’s because bubbles can last much longer than any rational person thinks is possible. And that’s why Soros says you should buy the bubble when it’s forming.

When to Stay in a Bubble

Let’s go through an example…

When it came to the markets, many considered former Federal Reserve Chair Alan Greenspan to be one of the most knowledgeable.

On December 4, 1996, he gave a speech in which he said the markets were experiencing “irrational exuberance.”

How did markets do after that statement? 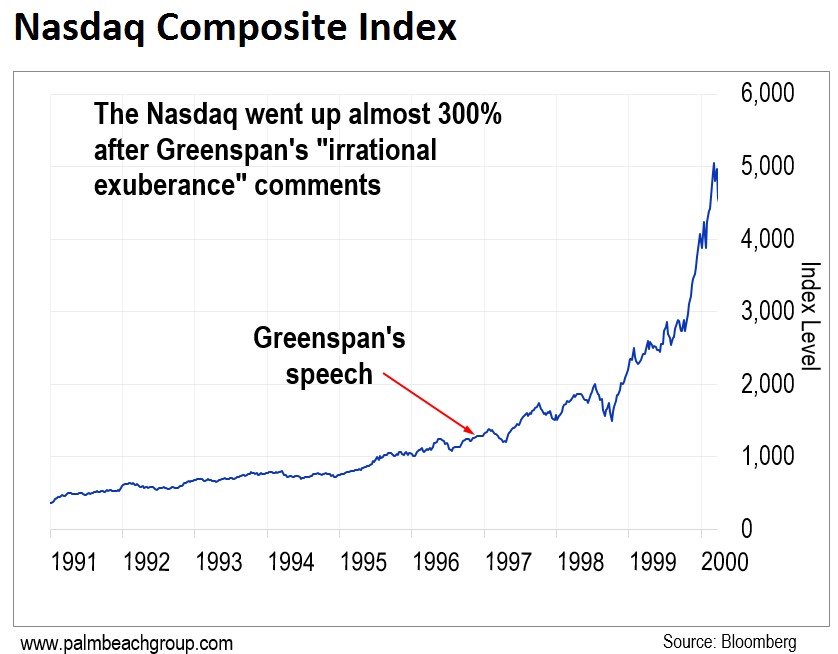 As you can see, Greenspan was a little early on his call.

The bubble was just getting started. Any investor who followed his advice and sold would have missed out on a chance to quadruple their money.

Market pundits have been calling the current rally a bubble since 2013.

For example, Forbes wrote this headline in October 2013: “Why Stocks Are Undoubtedly Experiencing a Massive Bubble.”

Forbes’ call didn’t pan out, either.

From 2015 to ’16, MarketWatch, Forbes, The Washington Post, and The New York Times, respectively, made warning calls about market bubbles (see chart below). 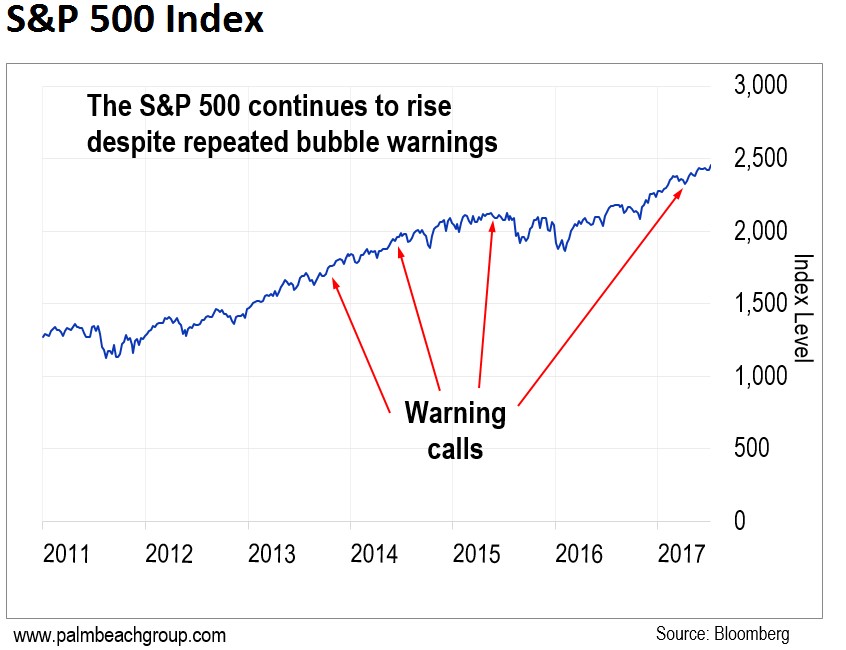 Despite those calls, the market still charged higher.

In my opinion, we’re not in a bubble. But one may be forming. That’s a reason to buy, not to sell.

The advice from one of the world’s richest traders is more important now than ever.

Nick’s Note: Today, we have a special Chart Watch from my colleague Jeff Clark.

The high-yield bond sector was on the verge of breaking down last week.

But the market somehow kept its junk together. Look at this updated chart of the iShares iBoxx $ High Yield Corporate Bond Fund (HYG)… 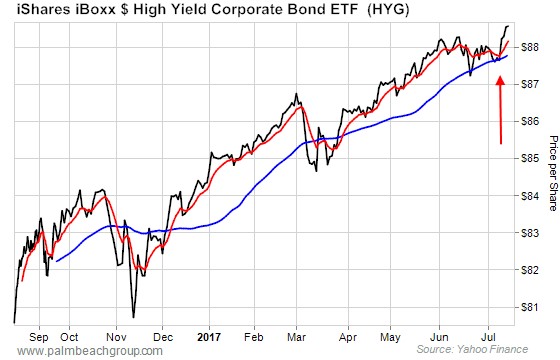 Last Wednesday, HYG was sitting right on the support of its 50-day moving average (MA)—the blue line. And the 9-day exponential moving average (EMA)—the red line—was on the verge of completing a “bearish cross” by crossing below the 50-day MA.

If that had happened, it would have likely kicked off an intermediate-term decline phase for HYG—which would have led to a decline in the broad stock market.

But instead of breaking down, HYG exploded higher. And the bulls bought themselves a little extra time.

HYG closed at an all-time high on Friday. And by doing so, it has given stock market bulls another life.

Today, Palm Beach Confidential editor Teeka Tiwari is hosting a free training session about his strategy to pick the fastest-growing cryptocurrencies in the world.

He’ll also tell you how to claim a portion of our $250,000 Bitcoin giveaway on Thursday night. But you must attend the event for details. Register for free right here… 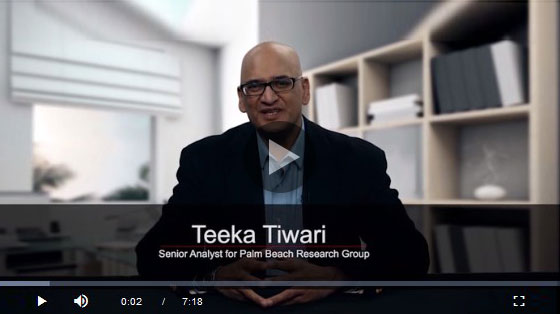