Nick’s Note: We’ve talked a lot about bitcoin lately. With good reason… It’s gone from $400 to $2,900 in the past year—a 625% rise. And even after that huge run, we think it still has room to run higher. My colleague Greg Wilson is an expert in this space. Today, he explains why you should ignore the skeptics and buy some bitcoin now.

All it takes for a good rally to end is two people talking about it on the train.

That’s according to Randall Forsyth, editor of the oldfangled Wall Street weekly Barron’s.

I’m surprised Barron’s even wrote about bitcoin. But Forsyth’s conclusion is predictable.

He thinks the bitcoin rally is a 21st-century version of the Dutch “Tulipmania.” Here’s what he wrote in the May 27 edition of Barron’s:

Bitcoin’s fans claim it is a technology and not something that can be valued like a stock, which probably echoes conversations in Amsterdam coffee houses in the 1600s to rationalize paying any price for tulip bulbs.

Forsyth recounted a recent story of two people talking feverishly about bitcoin on the commuter train. And he harkened back to a similar situation about tech stocks in the late ’90s.

The crypto-currency (bitcoin) has taken flight and taken hold of the public’s imagination like the dot-com bottle rockets before the turn of century.

I can’t help but wonder if Forsyth is still using a typewriter and flip phone.

Not to be outdone, Bloomberg followed up with a May 29 article listing five reasons why people are skeptical about bitcoin. That article also cited the tulip craze.

The timing of the articles (May 27 and 29) shouldn’t go unnoticed.

Despite bitcoin’s resiliency, people keep asking “Is it different this time?”

Today, I’ll show you two reasons why the bitcoin rally is far from over. But more importantly, if you’re a bitcoin skeptic, I’ll reveal the one question you need to ask yourself to get over the hump… and profit from the bull market in cryptocurrencies.

Ignore the Skeptics and Listen to These Guys Instead

As regular Daily readers know, no one in the business covers cryptocurrencies like we do at the Palm Beach Research Group. And we’ve been light years ahead of the mainstream media—which still has its head stuck in the sand when it comes to cryptocurrencies.

Just last week, my colleague Teeka Tiwari warned that bitcoin doubters would be out in force. As he showed us, bitcoin has been declared dead at least 129 times already. (And that’s not counting the latest premature obituaries from Barron’s and Bloomberg.)

We’re seeing it again now. But it’s not adding up to what I’m hearing from cryptocurrency experts. These are the people who really know what’s going on… and the ones I listen to.

Last month, I attended the Consensus 2017 blockchain conference in New York. This conference gave me access to some of the greatest leaders in the cryptocurrency space. And none of them referred to bitcoin as “Tulipmania.” In fact, it was quite the opposite.

One illuminating comment came from Michael Moro, the CEO of Genesis Global Trading. Genesis is an institutional trading firm. And it’s traded over 1.5 million bitcoins. (That’s over $3 billion in today’s dollars.)

He meant that quite literally. In 2016 and early 2017, institutional clients interested in bitcoin were millionaires. Today, billionaires are asking Michael about buying bitcoin.

Brian Kelly, the founder and managing member of Brian Kelly Capital Management (BKCM), shared a similar sentiment at the conference:

This supports what I explained in the March 27 Daily. There’s $3 trillion in assets under management in the hedge fund industry alone. If a small percentage of those funds goes toward bitcoin, it could boost prices to over $4,000.

But institutional money isn’t the only tailwind behind bitcoin. Changing regulations are making the currency a legal method of payment in many parts of the world.

Japan is a good example of what’s to come.

On April 1, the country recognized bitcoin as a legal method of payment. (We brought this story to you back in April.) Now we’re starting to see the news bear fruit.

Major companies are entering the cryptocurrency exchange market in Japan. These are not tiny startup companies. We’re talking about companies with $1 billion-plus market caps.

One example is SBI Holdings. The $3 billion financial conglomerate is setting up SBI Virtual Currencies. It’s an exchange between the Japanese yen and cryptocurrencies. SBI manages $1.7 billion in assets.

Here’s why this is important… These are the companies setting up the infrastructure to handle the wall of money flowing toward bitcoin.

And the money is coming.

Consider one more comment I heard from Brian Kelly: “Japan’s regulation is big news. Japan does $10 trillion in foreign exchange trading quarterly. That liquidity is coming to cryptocurrencies.”

What we see in Japan will spread across the world.

What You Need to Ask Yourself

If you’re still not convinced, just ask yourself this one question. If you answer no, then you should go out and buy some bitcoin.

Okay, here’s the question: Is it too late to start using the internet?

I don’t think many people will answer yes. After all, the internet is a useful technology. Overall, life is easier with it. Former skeptics are now converts.

And what the internet did for information is what bitcoin will do for money. Money is just the first application. There are many more.

If you have a few bucks in your savings account, put some toward bitcoin.

Take the first step into the future. 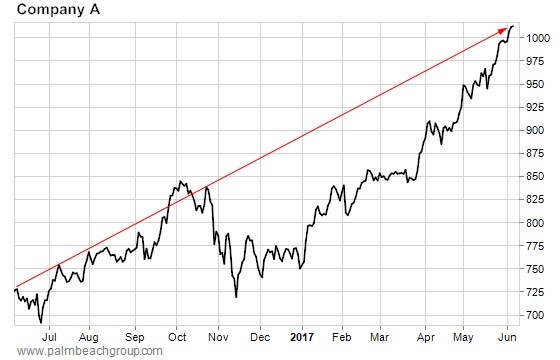 But you’d be mistaken.

In fact, my favorite chart pattern looks like this: 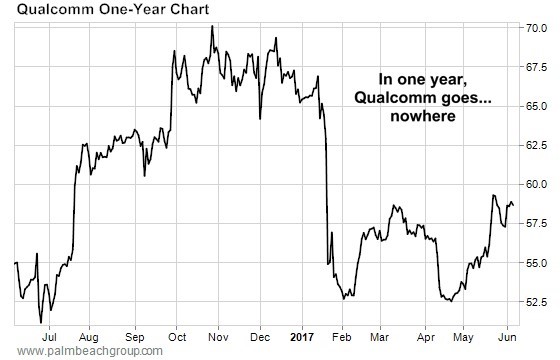 If you look closely at this one-year chart of Qualcomm, you’ll see that after some peaks and valleys, Qualcomm shares have gone essentially nowhere for the past 12 months.

We call this a Sideways Pattern.

Shares started out at $55 one year ago… and trade for $58 and change today.

Regular investors hate charts like these. And to be fair, they can’t help but feel frustrated.

Yes, they own shares in an elite, dominant business. But they rely on capital gains. And for gains to happen, they need shares to be moving up and to the right on this chart.

In my Palm Beach Income trading service, we are not regular investors. We look at the market—and trade setups—through the eyes of option income traders.

And when I see a Sideways Pattern chart like that for an elite business, I see that other investors are frustrated. And that means they’re willing to pay us juicy put premiums.

After all, if shares have been range-bound for a year, investors aren’t sure how much longer shares will remain stuck in neutral.

They’re willing to pay us big money upfront because we’ll protect their downside risk. The thing is we’ve already covered our downside risk by doing exhaustive research on our target companies.

When you see patterns like this from your favorite elite, dominant businesses, you should consider selling put options on the company.

This strategy has worked out great for us at Palm Beach Income since 2012… and it can put streams of cash into your pocket as well.

For four days each year, the U.S. government opens up special trading windows for every publicly traded company in America. On June 30, 2017, the next “window” opens up… 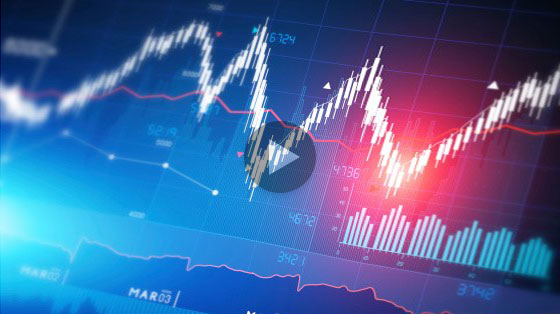