The best magicians are masters of misdirection.

To wow the crowd, they need to catch everyone off guard. That’s why they always use sleight of hand.

You’ve seen it before. There’s a flash and a bang, and then a white rabbit or pretty lady appears out of nowhere. The trick mesmerizes the crowd.

Well, the market works in a similar way…

A meltdown in March, followed by a flash and a bang. Then, a historic rally into June. And the trick mesmerizes investors.

The thing is, magic in the market isn’t designed to titillate. It’s more like dark magic. And Wall Street’s big money uses it to profit off the crowd (Main Street).

But there’s a way to detect the market’s sleights of hand. And today, I’ll show you how…

Regular readers know the big money leaves clues about its next move. And if you can sniff them out, you can make handsome profits following it.

That’s why we turn to my “unbeatable” stock-picking system. It’s like having your very own market “tell.”

As you know, it scans nearly 5,500 stocks each day. And it uses algorithms to rank each one for strength.

But my system does more than just look at individual stocks. It also looks at the big-money buying and selling in the broad market.

Take a look at the chart below. It shows the numbers of big-money buy and sell signals in the market… 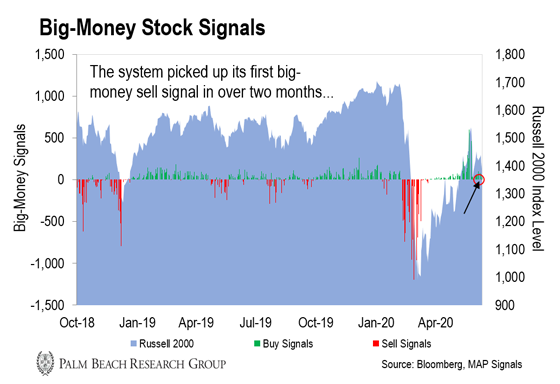 Now, my system’s data flagged a record amount of buying over the last two months. But that streak came to an end on Thursday.

You likely can’t see it because it’s so tiny. But on the far right of the chart, we finally got our first sell signal on June 25.

The system’s historical data shows that when big-money buying slows and selling grows, a pullback is in the offing. But there’s a lag between slower buying and an eventual pullback.

And this is where the market’s misdirection comes in…

While the data shows that big-money buying is drying up, retail investors are still piling into the market – pushing stocks higher. Still, the data says things are ready to fall.

Now, I’m not saying we’ll see another violent crash like we did in February and March. But when the market is this overheated, it needs a breather.

The market’s misdirection works because the major indexes you read don’t show what’s going on underneath the surface. They might be going higher, but my system shows a clear divergence: Big-money buyers are vanishing.

There’s some good news here, though. Lower prices equal opportunity for those who are patient.

So while the suckers get duped, we’ll use this opportunity to create a shopping list of great stocks to pick up at fire-sale prices.

Remember, the next time you see a magician, don’t focus on where they want you to look. Focus on what they’re trying to hide.

The same applies to the markets. Look at what the big money is doing, not what it’s saying. Ignore the flashes and bangs. And watch the data instead.

P.S. As I mentioned above, we’ll wait for the right moment to strike. Timing is everything. And my “unbeatable” stock-picking system can identify potential outliers in any market conditions – especially during the coming pullback.

In fact, it’s handed my Palm Beach Trader subscribers a portfolio win rate of 78% – and average wins of nearly 80%. And now’s the perfect opportunity to join them in following the big money to profits.

Since my system is identifying the next crop of market winners, be sure to learn all about how it works right here…