In 2008, I was Cantor Fitzgerald’s Head of Equity Derivatives, North America.

We were in the depths of the Great Recession. From peak to trough, the market would end up dropping over 50%.

And on the trading floor, things were nuts. One day, the market would be in free fall. Brokers would loudly scream orders, trying their best to trade in whippy conditions.

Every stock was up. The screens in the room were all bright and green. And everyone would stare in amazement. You could literally hear a pin drop on the trading floor.

Now, we were a colorful bunch and called these rallies “face-rippers.” Because if you’d shorted the market, they could rip your face off.

Without fail, investors would buy these rips… and eventually lose their shirts.

You see, these rallies were actually a bad sign. And now, they’re starting to pop up again.

So today, I’ll reveal why it’s a mistake to buy them – and when you should be getting back in the market instead…

Rise of the Machines

Back on the trading floor in 2008, our big institutional clients weren’t the ones behind the face-rippers. They weren’t calling in orders to buy (and ultimately, push the market higher).

All that green we were seeing was coming from a bunch of computers trading – not other humans.

And that’s one of Wall Street’s secrets: Most trading is done by computers.

According to Art Hogan, former chief market strategist for investment bank B. Riley FBR, on a typical trading day, computers account for 50–60% of market trades. And they can make up to 90% of trades when the markets are extremely volatile – like they are now.

You see, computer programs execute buy and sell orders based on complex algorithms and formulas, without a human involved in the process.

These algorithms scour news feeds and buy and sell based on headlines.

This Pullback Isn’t Over Yet

As you know, the Dow dropped a record 2,013 points and the S&P 500 fell 7% on Monday – triggering the market’s circuit breaker.

Trading paused for 15 minutes for the first time since 2008. That’s ultra-rare.

As stocks rise again like this, the big money will have protective trailing stops for their investments.

And if stocks drop again on another leg down, the computer selling will take over. These stops will be triggered – and cause even more selling. Any gains made on this rip up will quickly be erased.

So we’ll see a cascade effect until all the sellers are washed out and no one is left to sell. Once we’ve hit that bottom, it’ll be safe to get back into stocks.

Now, when exactly will that be?

Don’t Get Your Face Ripped Off

If you’ve been following me regularly, you know I developed my own “unbeatable” stock-picking system.

I’ve used my experience from nearly two decades at prestigious Wall Street firms – regularly trading more than $1 billion worth of stock for major clients – to make sure it’s highly accurate, comprehensive, and effective.

It scans nearly 5,500 stocks every day, using algorithms to rank each one for strength. It also looks for the buying and selling movements of big-money investors in the broad market.

And right now, it’s signaling that this selling period isn’t over yet… 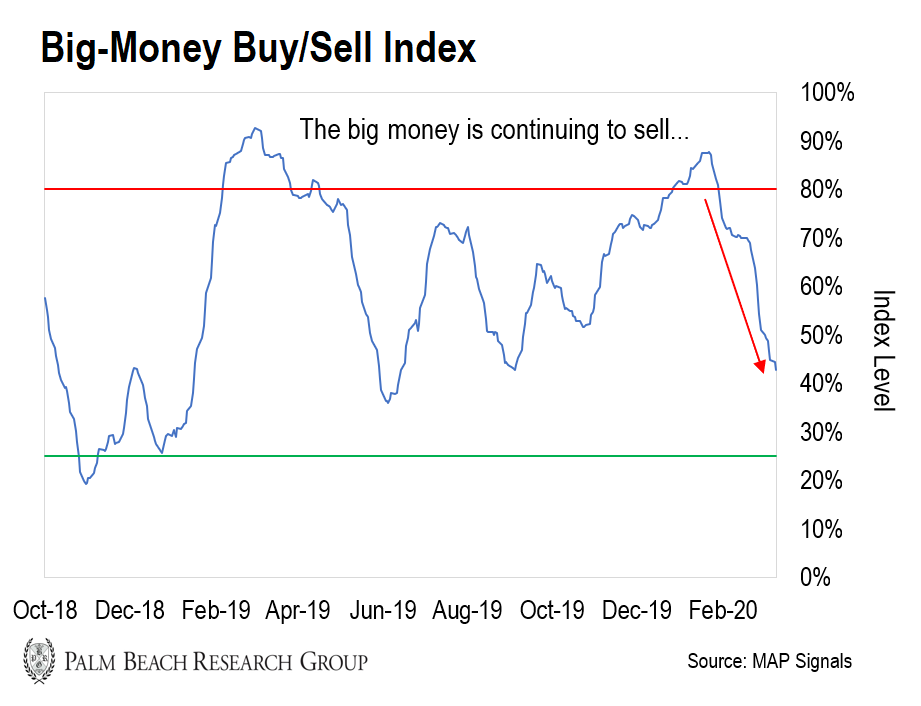 When my big-money index is at 80% (see the red line above) or more, it means buyers are in control and markets are overbought. And when it dips to 25% (the green line) or lower, sellers have taken the reins, leading the markets into oversold territory.

Based on my system’s data, we have at least until March 20 before this selling pressure ends. So there’s still about a week left to go.

In fact, we saw selling pick up again today. The markets were down about 5% as of this writing. So any gains you might’ve made on Tuesday would’ve likely been erased.

That’s why you should be careful about buying these short-term rips higher. You’ll likely see any quick gains washed out by the machines when they start selling again.

In the meantime, don’t get your face ripped off… Use limit orders on any trades you make to protect your capital and reduce your risk.

Just focus on the big picture. Once this sell-off hits the bottom, the computers will switch back to buying mode. And we’ll have the opportunity to ride high-quality stocks back up higher.

P.S. As I mentioned, this pullback is handing us a chance to ride great companies higher – by getting in at a discount during the coming market bottom. And my "unbeatable" stock-picking system can help you spot the best of the best to get into.

In fact, my system recently pinpointed SolarEdge Technologies (SEDG) for my Palm Beach Trader subscribers. Just last month, we took 111% gains off the table as dry powder. Plus, it’s still holding up as a triple-digit winner, even in this sell-off.

So let me show you how to find the best stocks that big-money investors are piling into by using my system. That way, you can ride them to profits just like my subscribers did with SEDG. Don’t miss this opportunity to check out all the details right here.