During World War II, the U.S. Center for Naval Analysis had a big problem to solve.

Far too many U.S. bombers weren’t making it home from Germany. Analysts needed to figure out why… and how to reduce the casualties.

So they started collecting data on all the bombers that did make it back, mapping all the bullet holes they found.

The data showed a clear pattern – the damage was mostly on the wings and body of the plane: 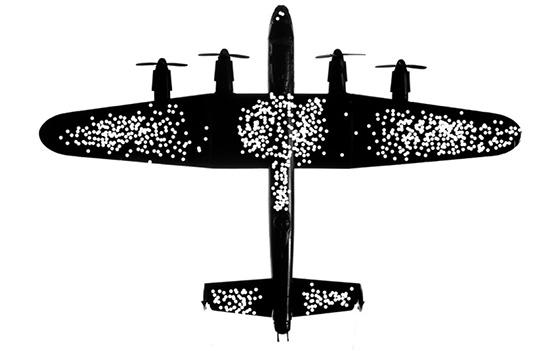 The data led them to a seemingly logical conclusion: reinforce the wings and body, reduce casualties.

But just before the Navy set about to re-armor the planes, Hungarian-Jewish statistician Abraham Wald pointed out that the data collection was flawed…

It only considered the bombers that returned. So really, all the bullet hole data showed were areas the planes could be shot and still survive. The black areas were the truly vulnerable ones.

Engineers reinforced those areas instead. And sure enough, this resulted in fewer fatalities and more successful bombing missions.

It’s a classic example of survivorship bias – where we only consider “successful” data and ignore “failure” data.

I can think of few places where survivorship bias is more dangerous than investing. And today, I’ll show you how to avoid that bias – and how to best set yourself up for big gains as this bull market continues.

The Most Dangerous Survival Stories

Stocks are an ideal setup for survivorship bias…

You see, media outlets tend to focus only on stocks that make magnificent gains over time… or the overnight breakout success stories.

But they rarely focus on truly important stats… like the one highlighted by Professor Hendrik Bessembinder. He found that in the last 100 years, only 4% of stocks are responsible for all the gains of the entire stock market. The other 96% of stocks couldn’t meet or exceed the return of treasury bills.

The media also tends to focus only on investor success stories. Rarely do you see a story about a trader who lost money in the market… even though that’s the story for most of them.

A tiny fraction of stocks – and endless media coverage of them – inspires would-be investors to try their luck. And judging by the 96% of stocks that don’t bring about life-changing gains, few are successful.

In computer science there’s an old saying: garbage in, garbage out. If you feed in flawed data, you’ll get flawed output.

It’s not much different when analyzing stocks. When looking at stocks, you want to consider everything. And my process considers a monstrous amount of data. We look at over 120 individual points of data on over 5,500 different stocks every day. Then we grade each stock across 29 factors.

Finally, all the stocks go through another set of algorithms to identify when big money is trading them in an unusual way. This way we leave no stone unturned. And we have no survivorship bias.

Over the years, this method has proven to identify the outlier stocks of the market: Bessembinder’s 4%.

That’s good for a long-term portfolio. But this system also helps us identify which markets big money is moving in and out of…

The Rotation Trade Is Running Out of Steam

Last week was a short week for the Thanksgiving holiday. Yet even in those three and a half trading sessions (Friday was a half day) we noticed a huge trend continuing.

The “catchup trade” is alive and well. Money is being deployed in previously unloved sectors left for dead in a COVID-ravaged economy. But as news of vaccines gain momentum, so do the stocks set to benefit from an economic recovery.

Value and small-cap stocks were gobbled up through the beginning of November. Sectors like real estate and financials suddenly saw inflows of capital as tech stocks treaded water.

This week we are noticing something new: even energy stocks are getting love now. These were the weakest of weak stocks in recent months. Yet this past week saw a shocking 137% of the energy universe bought up by big money. (That means all the stocks in the sector were bought, and by magnitudes higher amounts than previous weeks.)

Materials and real estate were the second and third most bought sectors. (And it’s big buying too. When a sector turns yellow, it means more than 25% of it was bought – and that is noteworthy.)

But before we get carried away, let’s not let these recent events cloud what’s been working for years.

Technology stocks have propped up this entire market for a long time now. While they’re taking a breather this month as other stocks play catchup, I suspect we’ll soon see a flow of capital back into tech.

Much like the expensive gadgets that went on sale over the past week, tech stocks themselves are trading at a massive discount to their future potential. Even with an uncertain investing landscape ahead, I don’t believe there’s a future where tech isn’t a massive contributor to stock market gains.

For investors looking to pick up the “4%” of the market at a steep discount, you can’t go wrong with the Invesco QQQ Trust (QQQ). It holds a basket of the world’s best tech stocks, and will give you broad exposure to a sector that I’m convinced will return to market leadership status in short time.

P.S. I think any investor loading up on tech right now will do great in the coming years.

But to do even better than that, it helps to have an unbeatable stock-picking system backing you up.

The same system that shows me where the big money is buying… and how much… is also responsible for some of the biggest winners I’ve recommended to readers. One such recommendation, The Trade Desk (TTD), reached a 10x return in today’s trading.

Every stock my system finds has similar potential. And my next pick comes out on Thursday… So just go here to see how you can get your hands on it.