A party is raging right now – perhaps even the biggest bash the world has ever seen.

And while I hate to say this, you simply haven’t been invited. Worse than that, you’re unknowingly footing the bill.

In fact, the tab is so high your children and grandchildren will be paying it off for decades to come.

That’s because this isn’t a party in the traditional sense. And it isn’t about eating or drinking or loud music.

It’s a full-on monetary bash fueled by your U.S. dollars.

Unless you travel in the same circles I do, you might not realize just how huge this party actually is.

Take a friend of mine. He lives a few blocks from the ocean in Santa Barbara, California.

A few months ago, he sold a vintage Alfa Romeo for a tidy profit after just several years of ownership. A wealthy attorney simply sent him a cashier’s check and bought the car sight unseen.

The Rolex GMT-Master he wears daily is worth six times what he originally paid for it. Today, it’s even more valuable than many 401(k) accounts.

Think about that for a second. This guy is driving sports cars… wearing fancy watches… living in an expensive home… and laughing all the way to the bank.

I’m seeing the same thing in my personal life – not just with cars, watches, and real estate – but even with my boat.

Boats are notoriously bad investments. As the old proverb reminds, “A boat is a hole in the water you pour money into.” Yet right now, I could sell my boat for $35,000 more than I paid for it 18 months ago.

That should never be possible… and yet it is.

This is the time we’re living in right now. So why are the rich rushing to buy expensive watches… overpriced real estate… and even boats?

Because they know the real truth: Their dollars are being devalued at an alarming rate by the actions of the Federal Reserve… And that pushes the value of certain real-world assets higher and higher.

The wealthiest part of our society is swimming in money… but again, they know how quickly their dollars are being devalued. So, they’re doing everything they can to trade their cash for things of real value – especially the rarest, most valuable assets on the planet.

Meanwhile, most regular Americans won’t be invited to the party as this trend plays out.

Unless they understand what’s happening right now – and take protective steps immediately – they’ll continue struggling to make ends meet while the price of a better life climbs faster and faster.

Most people think inflation means soaring prices for milk, bread, and meat. Or clothing and household items. Or gas and electric prices.

Well, we’re not seeing that kind of inflation happen in a major way… Yet.

Instead, prices are skyrocketing for things that were already rare and valuable – commonly called “trophy assets.”

It’s also happening in art, wine, and other collectibles.

Because the U.S. central bank has been printing money at an unprecedented rate, and it started long before COVID. 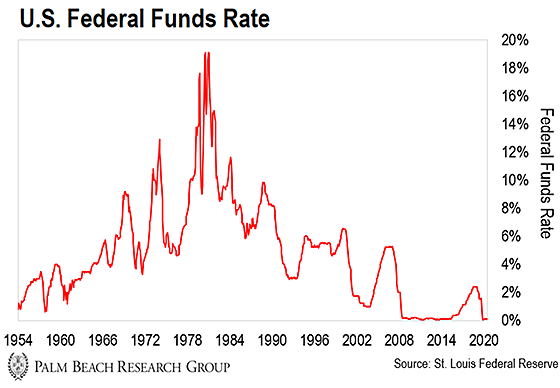 That alone destroys the value of cash. It punishes people looking for safe, steady income… And it sends investors into anything that might produce better returns.

However, whenever a speculative frenzy has popped, the Fed has gone further – using a whole range of entirely new techniques to inject even more money into the financial system.

For example, in the wake of the 2008 financial crisis, they started several rounds of “quantitative easing” and other bailout efforts like the Troubled Asset Relief Program (TARP).

All these schemes are just fancy ways of further increasing the amount of money flowing through our country’s financial system.

Perhaps you remember how alarmed people were when the Fed’s balance sheet – a rough indicator of the money being printed – more than doubled in 2009.

Well, that was nothing. Since then, the Fed’s balance sheet has continued to swell. And in 2020, it absolutely exploded. 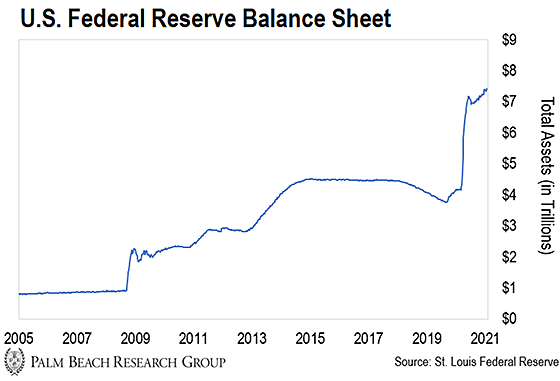 All told, the Fed’s balance sheet is more than seven times bigger than it was as the financial crisis was getting underway.

And the amount of actual U.S. dollars circulating in our economy has jumped 26% just in 2020 alone. You can see it in this chart below of something called “M2,” a broad measure of the money flowing into our financial system. 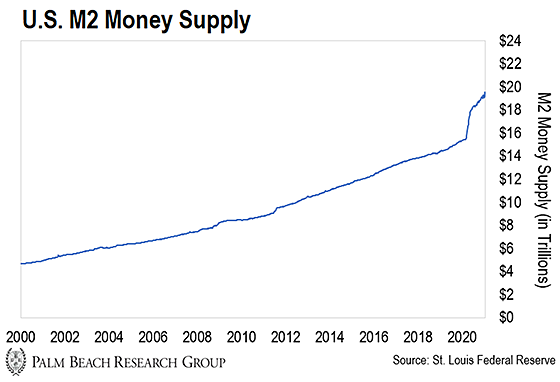 This is absolutely crazy.

A severe devaluation of every single U.S. dollar you hold is the inevitable long-term consequence of all this money-printing.

It doesn’t take a PhD in economics to understand that the more money that goes into circulation, the less buying power each dollar has going forward.

Just to put it all into a single picture, here’s a chart of the U.S. dollar’s buying power relative to a basket of the world’s currencies… 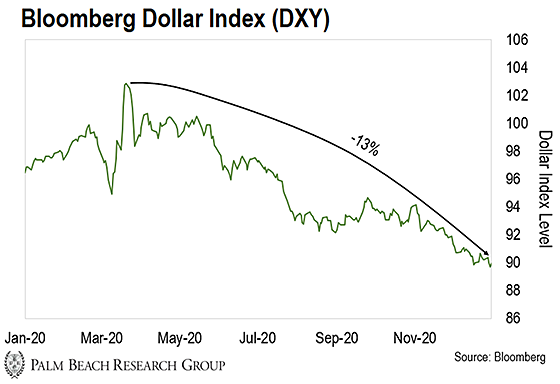 A Dollar Index level of 100 is considered to be the baseline value.

So if the index is higher than 100, then that means the U.S. dollar has increased in value versus the world’s currencies, while lower than 100 indicates a decrease in value.

As you can see in the chart, the greenback lost 13% of its relative value just since the pandemic money-printing began.

If everyone’s portfolio dropped 13% tomorrow, it’d be front-page news. But since we don’t feel the immediate effects of lost buying power… many people have been lulled into a false sense of security.

And if this trend continues, think about how much further each dollar will have to stretch just to buy the same goods and services you’re currently consuming.

This is why wealthy people are putting their money into anything and everything that can keep pace with the Fed’s money-printing. And let me be clear: If you don’t take similar actions right away, you’re going to get left behind.

It’s extremely likely we’ll see traditional inflation kick in as all the money finds its way into the regular economy – especially once the threat of COVID fades into the rearview mirror and Americans come out in force to celebrate.

Will You Be Able to Afford the Life You Actually Want?

A dream car. A vacation home at the beach. Top-tier healthcare. A quality education for your children or grandchildren.

As the wealth gap grows wider, many of life’s greatest pleasures – and even some of its necessities – will become completely unattainable for average Americans.

They might continue to make ends meet. But their choices will be severely limited.

The good news is that I’ve already given you several backdoor ideas to profit from this massive shift… even if you aren’t among the 1%.

For instance, I’ve shown my subscribers how to tap the red-hot collectibles markets… And how to access the private equity markets through pre-IPOs and SPACs.

And most importantly, I’ve shown many of you how to make life-changing gains through bitcoin and other cryptocurrencies.

Easy money policies are excessively rewarding the wealthy. The only way for regular people to keep pace is through a handful of investments and strategies that produce gains big enough to keep up.

Failure to recognize the shift will have dire consequences.

Friends, our dollars are being steadily devalued by massive amounts of money-printing.

The only way to keep up is by owning things that can stay ahead of that – especially assets that are scarce and highly desirable.

If you haven’t already, I urge you to consider allocating a portion of your capital to alternative assets like bitcoin, collectibles, real estate, and private equity. They will keep your wealth growing ahead of the inflation curve.

P.S. Picking the right investment can transform your life… Microsoft in the 1980s… Amazon in the 1990s… Apple in the 2000s… Bitcoin in 2010. Any one of these could have made you a millionaire many times over… starting with very little.

I’m proud to say I picked the last two investments of the decade. And I believe the “right” investment in the 2020s will be another “alternative” idea.

It’s not 5G, artificial intelligence, or the Internet of Things. The answer may even surprise you. And, for those who take early action, it could lead life-changing gains.

I put all the details in a special presentation. Click here to watch it…