Joe S. follows a simple investing strategy: Buy the S&P 500—and hold it.

But his buy-and-hold approach wasn’t as easy as he thought.

Here’s what happened over the last nine months…

Joe was disgusted with the market moves and his results. So he moved all his money into his money market fund. And he swore off investing again.

Four straight months of steady gains and Joe was back on board. He re-invested in SPY at the end of April. However…

There’s also the opportunity cost. If Joe had just stayed invested the last nine months, he would’ve made 2.3%. His portfolio’s value would’ve been $102,310.

And if Joe’s story sounds familiar, that’s because he’s the average investor.

As you can see in the chart below, the average Joe badly underperforms the market… 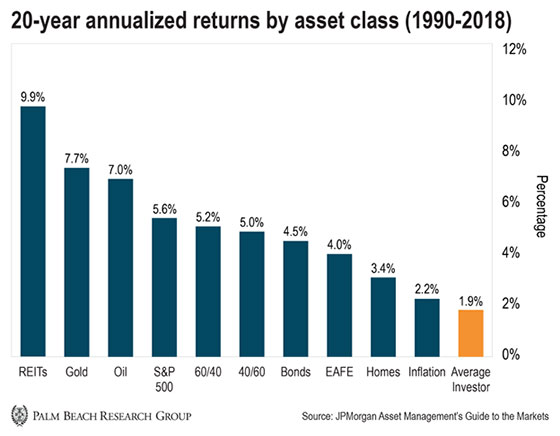 People set unrealistic expectations. They buy too much of one stock and not enough of another. They jump in and out of investments based on the latest headlines. They buy at market tops and sell at market bottoms. They can’t deal with volatility.

Basically, they don’t have a plan.

But as a Daily reader, you aren’t the average investor.

You see, at PBRG, we have a plan. And that’s why we’re crushing the market.

And in today’s essay, I’ll show you what’s behind our performance—and how you can use this strategy to continue boosting your own portfolio.

That’s why we publish an asset allocation guide each January. It’s our most important issue of the year. (PBL subscribers can read our 2019 guide here.)

Unlike other newsletters, we go off the beaten path to find investment ideas of all varieties. Over the years, we’ve written about alternative ideas such as:

You won’t find this level of diversification in any other newsletter in America. And that’s why we’re beating the market.

You see, various studies show that over 90% of a portfolio’s long-term returns are driven by asset allocation.

At The Palm Beach Letter, we use a model similar to the Swensen Approach—also called the Yale Model.

Yale CIO David Swensen helped develop the model in 1985. It divides a portfolio into multiple asset classes (eight, to be exact): 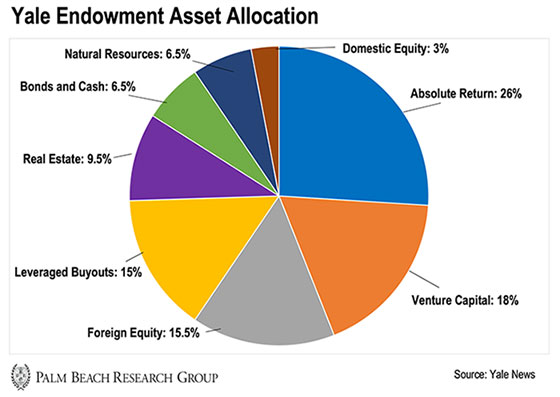 Over the last three decades, Swensen estimates Yale’s endowment added $33.3 billion more value than a traditional 60-40 portfolio would have. (Today, the endowment supports over one-third of Yale’s total operations.)

And like the Yale Model, we have eight asset classes in our Palm Beach Letter asset allocation model, too:

Our broad diversity has allowed us to beat the market with less downside risk.

But let’s look back at the last nine months…

The ride hasn’t been smooth. Since October 2018, the S&P 500 has had three of its worst five monthly declines over the last 10 years…

Most investors wouldn’t be able to handle that kind of volatility. But we outperformed each time…

Diversification Is Your Shield

Look, we’re in the longest bull market in U.S. history.

It’s obviously an extended run. And plenty of naysayers are still predicting a crash. But that doesn’t matter.

You see, diversification will generate long-term outperformance and shield your portfolio—even during tough times.

Bottom line: If you follow our asset allocation model, you’ll be prepared for wherever the market goes next.