That’s been a popular question among cryptocurrency investors over the lifespan of the asset class. For example: 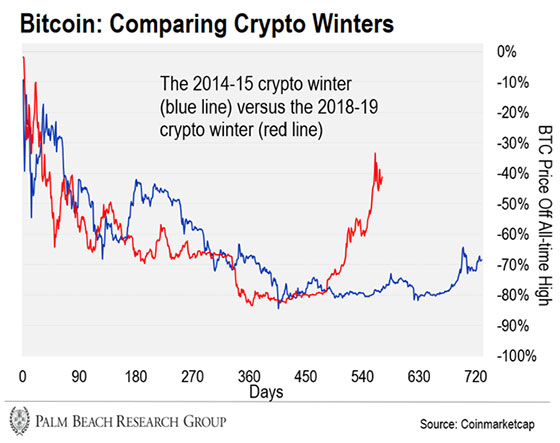 And as you can see, we’ve emerged from Crypto Winter.

After seeing bitcoin’s recent breakout beating the 2014–2015 pattern in the chart, you may still be asking, “Is it too late?”

Again, the answer is: No, not at all.

We expect bitcoin to reach its previous high—then go multiples higher. And it’ll carry the entire crypto space with it.

Surges in both institutional and retail interest will lead this move higher.

On the institutional side, we’ve seen several major developments already:

So it’s becoming a lot easier for institutional money to invest in bitcoin and cryptos.

Consider that the entire crypto space is relatively small at around $350 billion.

Global pensions and hedge funds alone have over $30 trillion in assets. If just 1% of these funds migrate to cryptos, the market would double from here.

Bottom line: Institutional demand will be a boon for crypto prices. But that’s not the only demand we’ll see…

On the retail side, we’re still a long way from the mania we saw at the end of 2017.

You can see this in the chart below. It shows the interest in bitcoin through the lens of Google Trends. And it’s a good way to gauge retail interest… 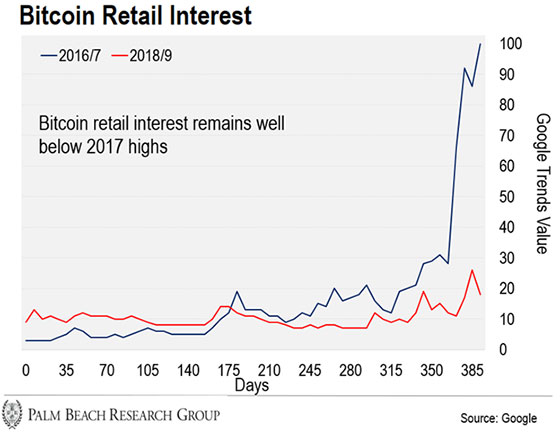 Research shows the price of bitcoin is highly correlated to Google search trend results. In other words, as interest in bitcoin grows as shown in Google Trends, the price grows with it.

As you can see, retail interest is nowhere near the late-2017 levels. And by the time we reach those levels, bitcoin’s price will be well past its all-time highs.

That’s how we know it’s not too late to get in.

Now is a great time to use this pullback to add to your positions—before institutional and retail investors jump back in.

Remember, crypto is highly volatile and doesn’t go up in a straight line. So don’t bet the farm. You just need a small stake for the potential of life-changing gains.

P.S. Did you take the opportunity to add to your positions during Crypto Winter? If so, we’d like to know how you’re doing. You can tell us right here…