Last Friday marked the end of the third quarter of what’s been an ugly year.

Nothing seems to have worked.

Stocks have nosedived. For instance, the S&P 500 is down 23% since January. And supposedly safe bonds are down 30% over the same period.

Typically, stocks and bonds move in different directions, like a seesaw.

Yet, for the first time since 1976, both have fallen in tandem for three consecutive quarters.

Just like in the 1970s, high inflation is the culprit.

To rein in inflation, the Federal Reserve has hiked interest rates.

Right now, yields on 10-year Treasury bonds are near 4%. That’s not huge, especially when inflation is running at 8.3%. That means inflation is eroding more than double your return.

Still, it’s the highest rate on the 10-year Treasury in 15 years. And in investing, all things are relative.

Even though the “real” rate of return on bonds is negative… some investors have decided to take a guaranteed smaller loss on bonds rather than risk bigger losses on stocks.

So don’t be surprised if money continues to move out of stocks and into bonds in the final quarter of the year – especially as the Fed continues its aggressive rate hikes.

But the choice between stocks and bonds is a false dichotomy. Investors don’t have to just choose between those two asset classes.

There are alternatives to stocks and bonds. And right now, one asset class is beating both – even during this current bear market.

In today’s essay, I’ll tell you what it is – and how you can get exposure to it.

Thinking Outside the Investment Box

Stocks and bonds aren’t the only asset classes investors have to choose from. Not by a long shot!

But many investors get caught in that box. That’s why we need to use the business cliché and think outside of it. 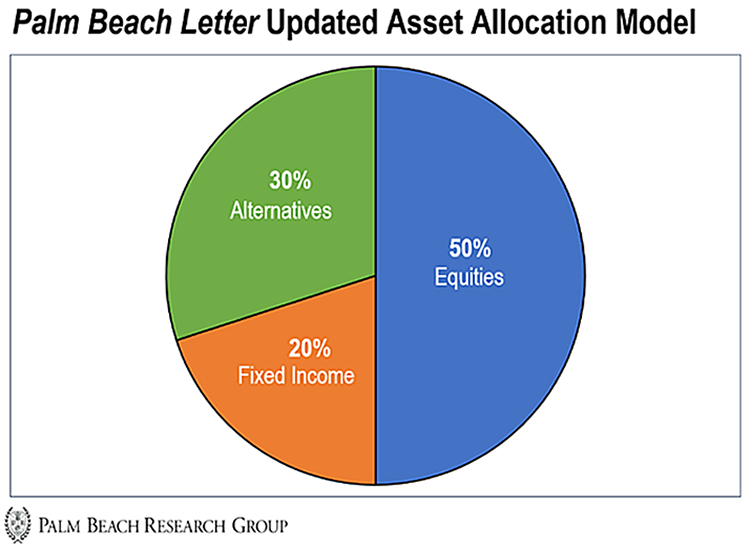 In today’s high-inflation environment, we think diversifying into other asset classes will help you beat inflation.

By diversifying, you will outpace inflation now, while positioning yourself to come out of this bear market better off than you went in.

Stocks may seem to be losing now, but over the long haul, it’s worth having them around for growth and income.

As mentioned above, interest rates are now at their highest in 15 years.

With bond prices so beaten down this year, this market isn’t looking as overbought as during the Fed’s 0% interest rate years.

But with interest rates potentially peaking early next year, locking in a high yield now could save your portfolio – and create a big stream of income for retirement.

That said, we believe the best return potential in today’s New Order of Money – in which out-of-control inflation will erode the purchasing power of your dollars – comes from alternative assets.

Alternatives include cryptos, real estate, collectibles, and even early-stage investments. 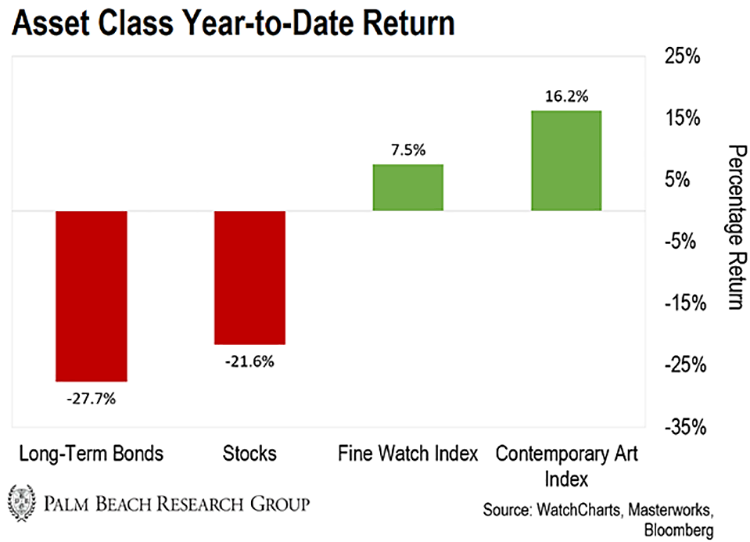 In a market environment in which even safe havens like gold are down… collectibles are breaking records.

They doubled in value in just a couple of years… for a multimillion-dollar gain.

He even scored a top gain of 800% as demand soared for an early brass movement F.P. Journe “Resonance” model.

That’s way more than Teeka has made on any of his other investments over the same time.

Meanwhile, Teeka says that he outpaced inflation to the point where forgot it was even a concern!

You don’t need to be a multimillionaire to get exposure to collectibles like a Jordan jersey, Mantle rookie card, or an F.P. Journe watch.

In fact, there are platforms that allow you to invest in “shares” of collectibles like these for as little as $10.

How to Get Exposure to Collectibles

My favorite platform to get exposure to collectibles is Rally.

Platforms like Rally do the research to weed out forgeries and find a good deal on a trophy asset… with many of their offerings being sold a few years down the line for a solid profit.

Best of all, these platforms allow you access to higher-level collectibles usually out of reach for everyday investors.

It’s an easy and affordable way to own truly real, rare, and enduringly desirable assets with the best appreciation potential over time.

Today, Rally has more than 400,000 users. And you can buy a fraction of world-class assets like a Ferrari or Warhol painting for as little as $10 per share.

A modest investment across a variety of collectible assets on the platform can go a long way to adding this unique and high-growth asset class to your portfolio.

Best of all, you can get shares of collectibles like these with a minimum of $10.

In this current bear market, just buying stocks and bonds won’t cut it. You need to add alternatives like collectibles to the mix.

Here’s the kicker… even if your collectibles go down in price, you still own them. You get bragging rights and a unique piece of history in something that’s real, rare, and enduringly desirable – what Teeka calls Maverick Investments.

Ultra-high-net-worth individuals are using collectibles to beat inflation… and even grow their wealth.

Not only are they “cool” and fun to talk about at your next cocktail party… They’re also a way to grow your portfolio and outpace inflation in this volatile market environment.