Now, I love capitalism. It allowed me – a once 16-year-old kid from England who arrived in the U.S. with only $150 in his pocket and zero connections – to become a self-made multimillionaire and achieve his own American Dream.

American capitalism made that possible.

But over the last 32 years, I’ve watched crony capitalism push the American Dream further and further out of reach for everyday Americans.

What I mean by that is companies have to be allowed to go out of business. That’s the very nature of capitalism. The weak get weeded out and the strong survive.

You can’t have a bunch of “protected” businesses that have access to unlimited public funds and call yourself a true capitalist. (I’m looking at you, Big Banks and Big Auto.)

You’d have to be blind not to notice that something’s very wrong with our once-great capitalist system.

The culprit is the Federal Reserve. It believes it must swoop in and save the world every time there’s a hint of a problem in the financial markets. But all its policies end up doing is widening the gap between the rich and the poor.

They come at the cost of savers – who under a historically normalized interest rate – would be getting 6% per year instead of 0.6% per year. We calculate savers are losing $70 billion per year in interest due to artificially low rates.

That money is flowing directly from your pocket and into Wall Street’s pockets. That’s what I mean when I say something is broken within the American capitalist system. We have become a welfare state for the mega-rich.

Today, I’ll tell you why this is happening – and how you can make money from it.

Partying on Your Dime

Since the 2008 Great Recession, central banks have injected $11 trillion of liquidity into the global economy through money-printing (euphemistically called quantitative easing, or QE). 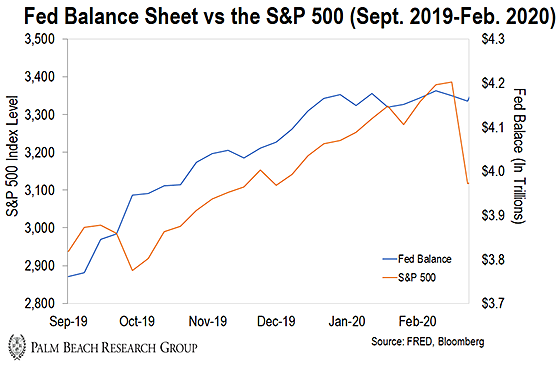 As you can see above, asset prices moved in lockstep with the Fed’s money-printing until the COVID-19 outbreak rocked the global economy in March.

Since then, the Fed has accelerated its spending – pumping an additional $3 trillion into the economy. And the market has rallied 56% off its March lows… 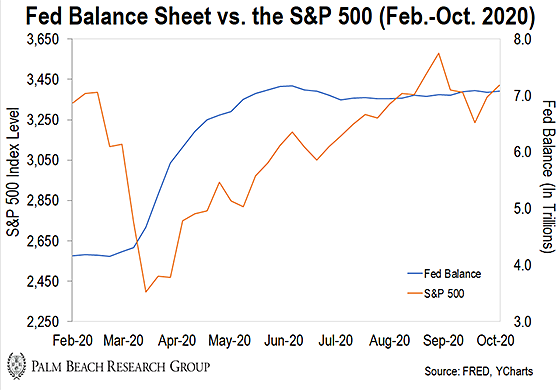 Now, this has been great for stock prices – and for the banks and brokers hawking them. But again, these bankers have been swilling champagne and chomping on caviar on your dime.

The top 10% of America’s wealthiest own 80% of stocks. So the elite got a subsidy giftwrapped by the Fed – again, a subsidy you, the American saver, paid for via pitifully low interest rates.

In the first 12 weeks of the pandemic, billionaires have used this “subsidy” to get a half-trillion dollars richer. In that same time span, 40 million people lost their jobs.

So all this “wealth” the Fed is creating is simply transferred from everyday savers like you. Now, this didn’t start in 2020. It’s been going on for decades…

I hope by now you see you need a new approach to achieve your American Dream. Old ideas of buying and holding traditional stocks and bonds just don’t work anymore.

If you want to make money from this new regime, you’ve got to get on the same side as the institutions.

That’s why I want to tell you about an idea Barron’s calls a “secret” way to make money.

Wall Street has been using it to make billions this year. Now, you can, too. It’s a highly reliable strategy to make your own money off all this money-printing. Studies show Wall Street is winning more than 95% of the time when using this method…

So how do you profit from the Fed’s money-printing? It involves a rare “Anomaly Window” that occurs every few years.

During this window, there is an enormous amount of uncertainty. And you can potentially pull forward as much as 39 years’ worth of profits in as little as 28 trading days when it’s open.

What’s special about this “Anomaly Window” is that while it’s open, you can make these types of gains from certain boring blue-chip stocks.

During this window, elite companies Home Depot, Cardinal Health, and American Express could have delivered gains of 1,500%, 3,000%, and 6,150%, respectively.

Friends, the Fed is using its printing press to rig the game in favor of Wall Street. And I can show you one of the most reliable game plans Wall Street’s using to profit from this easy money so you can, too.

Last week, I gave a presentation where I pulled back the curtain on this “Anomaly Window.” And I told more than 20,000 people who attended the names of 30 elite companies that could create a lifetimes’ worth of gains in 28 trading days.

And tonight, I’m rebroadcasting it for the last time. At midnight, it’ll go offline forever.

So if you want to see how to make a lifetime’s worth of gains in as little as 28 days, click here to watch my presentation before it’s taken down for good… and take the first step toward achieving your own American Dream.