That day, I rushed out a video update to calm the jittery nerves of my subscribers. (Paid-up subscribers can rewatch it here.)

Thirty years ago, I made the mistake of giving in to my fears… and it cost me and my clients millions of dollars in lost profits.

If this is your first cycle in the crypto markets, my bet is your stomach is churning right now. Back in the early 1990s, I went through the same process with my tech investments. I don’t want you to make the same mistake I did.

During the video, I urged my subscribers not to sell their bitcoin. In fact, I told them, if appropriate, they should use the pullback to buy more bitcoin.

If you listened to my advice then, I want to congratulate you.

So over that short span, a simple allocation to bitcoin would have outperformed the S&P 500 by nearly 20x.

And today, things are looking even brighter for bitcoin.

Just last week, the chair of the Federal Deposit Insurance Corporation said a team of U.S. bank regulators wants to provide a roadmap for banks to engage with crypto assets.

Friends, I can’t overstate how incredibly bullish this is.

When this regulation receives its final approval (and I believe it’s a matter of when – not if), you’ll be able to deposit bitcoin in a bank and get a line of credit against it.

That’s why I pounded the table in June and said buy more bitcoin… because there’s a good shot bitcoin hits $100,000 before the end of the year.

The Party Isn’t Over

In June, I had to urge my readers not to sell after bitcoin’s crash. I told them not only would it rebound… but it would go to a new all-time high.

And my prediction proved correct.

Now, I’m warning you not to sell your bitcoin as it rallies to $100,000. Listen clearly when I tell you this: It’ll be the biggest mistake of your life.

Because, despite headlines claiming investors are souring on bitcoin… or that its recent high was just “crypto ETF fever”… the party isn’t over yet.

I’ve been in this game a long time… And I’ve traded through many market cycles, including the 2017 bull market and 2018 Crypto Winter…

So I can tell you with confidence that the party isn’t over until you see extreme mania.

And we’re not seeing that type of mania yet…

We last saw extreme mania at the end of 2017. From January to the end of December of that year, bitcoin shot up as much as 1,780%. 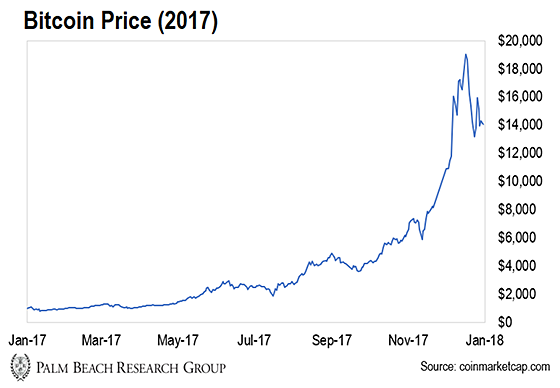 Soon after, we entered the brutal 2018 Crypto Winter I mentioned above…

But we haven’t seen those types of crazy, parabolic moves so far this year. During this cycle, bitcoin has had mini booms and mini busts but each time it has “stair stepped” higher, steadily climbing a “wall of worry” to make new highs each time. 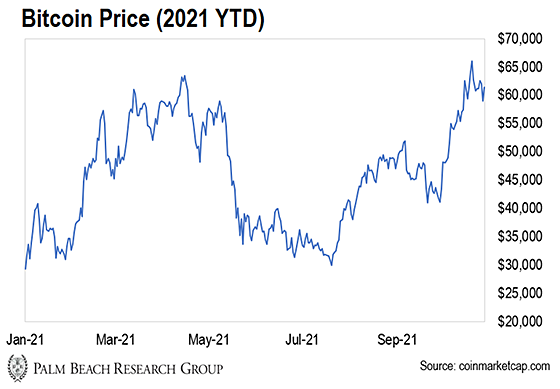 Sure, we’ve had spurts up to new highs… But it’s been a relatively slow, steady rise compared to late 2017 when bitcoin rose 300% in 30 days.

So when will I know it’s “last call” at the bitcoin party?

When your mother, grandmother – heck, even your great-grandmother – calls and asks you for advice about bitcoin…

Now, I don’t have a crystal ball. So I can’t time the exact top. But you don’t need to buy at the absolute bottom or sell at the absolute top to make a fortune in crypto.

You just need to be patient and let the game come to you.

The Next Big Bash in Crypto

While I believe latecomers to the party can still make 10x their money on bitcoin – the chance for the little guy to turn tiny grubstakes into life-changing gains is over.

But there’s another opportunity in a tiny subsector of cryptos that could make you a fortune in less than a year. And that party’s just getting started.

In fact, it’s brand-new, virgin territory in the crypto space.

I call them “Tech Royalties.” And I believe nearly 99% of people don’t know about these coins.

If I’m right – and I believe I am – what’s at stake with Tech Royalties is nothing less than generational wealth.

I’m talking about the opportunity to not only secure your future in this lifetime… but to secure the future of your children and their children. Wealth that transports beyond your lifetime.

And you could see that wealth over the next 365 days. It all has something to do with a catalyst I call the “Second Phase.”

You’ve probably heard of bitcoin halvings. They happen every four years. And after each halving, we’ve seen bitcoin’s price explode.

Yet unlike the four-year cycle of bitcoin halvings… the Second Phase is a once-in-a-lifetime event.

It’s preprogrammed, so it’s guaranteed to happen… and it has nothing to do with bitcoin.

When the Second Phase triggers, I believe you could make 10 lifetimes’ worth of S&P 500 returns in just 365 days.

During this event, I’ll share the name of my No. 1 Tech Royalty to buy now (it recently traded for less than 77 cents)… plus a special bonus for my VIP Pass Holders.

Click here to sign up for my event on Wednesday. And get the name to my No. 1 Tech Royalty to buy right now.

P.S. As I mentioned above, on the night of the big event, I’ll reveal my No. 1 Tech Royalty cryptocurrency to all who attend…

And for the first time ever, I’m going to release my complete premium research report that shows you why we are buying it, how to buy it, and how to claim your very own Tech Royalties.

It’s all explained step by step in my detailed report that is usually reserved for my paying members. The only “catch” is you must be on my VIP Pass Holder list…