Chaka: Jason, thanks for joining me here today in Carlsbad, California. Let’s get right to it…

We’ve all seen the doom-and-gloom headlines about inverted yield curves, geopolitical uncertainties, and trade war fears. These developments have the mainstream financial press worried that a market crash is around the corner.

And during your presentation, you agreed a crash is coming—but said they have the wrong “crash” in mind.

Jason: That’s correct. The crash won’t be in stocks. It’ll be a rates crash.

The effective federal funds rate is the interest rate banks charge each other for overnight loans to meet their reserve requirements. And it’s the most influential interest rate in the world. It affects everything from employment… to growth… and even inflation. 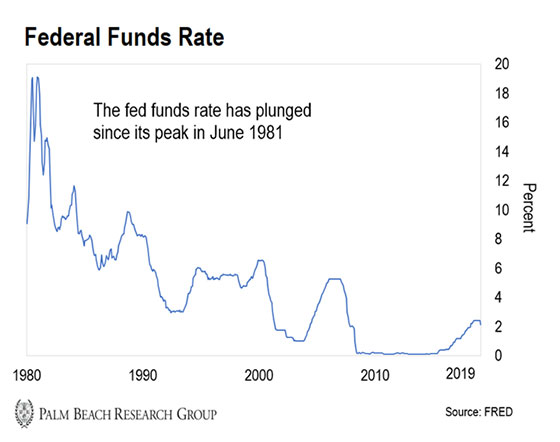 This is the real crash the mainstream media aren’t telling you about. But it’s good for the stock market.

Chaka: Why is this rates crash good news?

And the hunt for income is really on now because rates are going even lower. We’re already seeing negative rates in Japan and Europe. In Denmark, they’re even offering negative-rate mortgages.

President Trump has called for negative rates in the U.S., too. While we might not get there yet, U.S. rates are also headed lower—as evidenced by last week’s cut from the Federal Reserve.

Jason: Well, they’d have no choice.

You see, big institutional money accounts for about 70% of all trading volume every single day. And these money managers can’t charge fees just to sit in cash…

They simply have to put money into stocks. And right now, U.S. equities are the most attractive destination for investor capital.

Europe is dealing with Brexit uncertainty and an overall economic slowdown. Plus, the eurozone has its own pockets of negative rates.

Meanwhile, China’s economy is suffering from the trade war.

With all this geopolitical turmoil, investors will have no choice but to put their money in quality U.S. stocks. And U.S. equities continue to be more attractive than other securities—like “safe-haven” bonds.

Dividends are taxed at 23.8% [the maximum long-term capital gains rate]. And bond income is taxed at the 40.8% maximum federal rate for ordinary income. So assuming you’re in the highest tax bracket, your after-tax return on stocks is 49% more than on bonds.

Basically, U.S. markets are an oasis in a sea of uncertainty.

Chaka: And what’s the best way to play this rates crash scenario?

Jason: Again, big institutions account for 70% of daily trading volume. So if you want to find out which stocks are the best, you need to follow these firms.

Regular readers know I’ve created an “unbeatable” system that looks for the best stocks the big money is piling into. And that’s what I’m looking for right now: the best of the best U.S. stocks that the smart money is buying.

Chaka: During your presentation, you listed five companies you think will get a boost from this rates crash.

Now, out of fairness to our paying subscribers and conference attendees, I know you can’t give out all five. But is there one you’d like to share with readers today?

The company makes buckets of money… has high growth… and has really low debt. Best of all, it’s appeared on my top 20 buy list seven times this year. And when the big money moves into a money-making stock like this, I sit up and take notice.

Now, we own SolarEdge in my Palm Beach Trader portfolio. And it’s up about 50% since we added it in June 2019. So it’s above our buy-up-to price.

But if you’re interested in a company that’s getting fresh buy signals, it’s one you can put on your radar. Just remember to do your research before investing in any company.

Chaka: Thanks for your time, Jason.

Chaka’s Note: As mentioned, Jason’s our Wall Street insider. He spent nearly two decades at prestigious firms like Cantor Fitzgerald. And he walked away from it all to develop his own “unbeatable” stock-picking system based on his experience trading more than $1 billion worth of stock for major clients.

It’s the same system that identified SolarEdge before its 50% run higher… as well as the No. 1 stock on the S&P 500 for the past six years in a row. And now, Jason’s putting his system to the ultimate test during an exclusive event—to make you more money with more certainty. It could be the most profitable event you ever attend.

So be sure to reserve your spot right here. You won’t want to miss it.