How could they leave us in such pain?

Consumer confidence is at its lowest level in 70 years, retail sales are slowing, revenue projections are shrinking, and we’re seeing headline after headline about massive layoffs.

This is usually when the Fed opens the floodgates, and easy money floods the systems to save us.

We saw this after 2008 when the Fed slashed its key interest rate to zero and pumped $3.6 trillion into the economy during the Financial Crisis.

And again in 2020, when the Fed cut rates to zero and dropped another $4.6 trillion worth of helicopter money on the economy during the depths of the COVID-19 pandemic.

Each time they did this, stock valuations (measured by the S&P 500) more than doubled in the years following.

But as the economic data continue coming in, it’s looking like a pivot to easy money won’t happen anytime soon.

Last month, I showed you why we’d see more downside as the Fed remains hawkish longer than investors expect.

And that’s exactly what the markets are sobering up to.

In today’s essay, I’ll show you why we can expect even more pain ahead as the Fed slams the door shut to the possibility of a pivot before the end of this year.

And more importantly, how you can position yourself to come out of this bear market much wealthier when the next bull market begins.

Inflation Is Pushing Us Toward a Recession

As you know, the biggest problem the economy and market face is inflation.

Last week, the inflation data for August went to print and caught investors off guard.

Economists expected inflation, measured by the CPI index, to fall 0.1% from the previous month.

But instead, inflation climbed 0.1% from the previous month. That puts inflation at 8.3% on a year-over-year basis.

While the 0.1% increase from the previous month might seem like nothing to worry about, the data show inflation is proving harder to get rid of than previously thought.

Even the 5% drop in energy costs we experienced last month wasn’t enough to reel in inflation.

The reading was awful no matter which way you slice it. Inflation is proving to be more persistent and difficult to remove…

To see what I mean, take a look at the chart below… It shows four different ways the Fed looks at inflation.

Now, I don’t want to get into the weeds on Fed calculations, but using four different CPI measures helps create a clearer picture of how prices have moved… 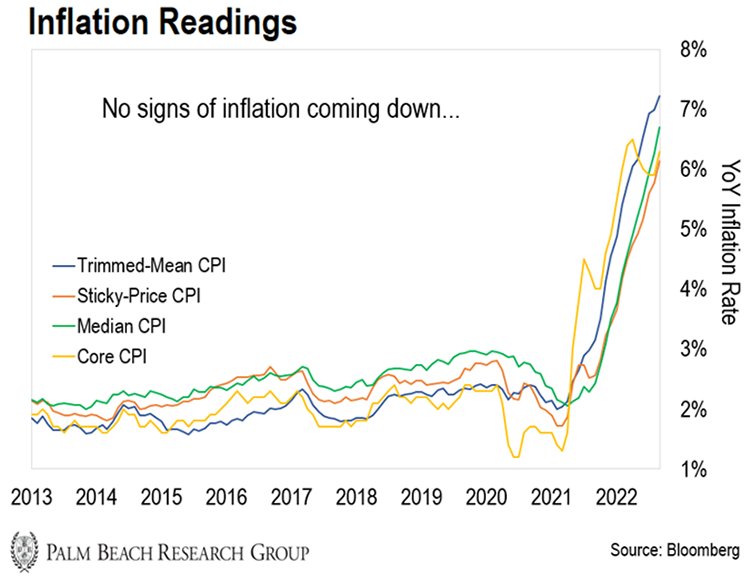 As you can see, it doesn’t take a Ph.D. to realize inflation hasn’t yet peaked.

And we’re nowhere near returning to the Fed’s 2% “target” level.

The Fed is starting to wake up to the fact that this is a much bigger problem than it expected.

The Fed’s top priority is to bring down inflation. And it won’t change its hawkish policy if we see an improvement in any single month.

If the Fed is going to change its hawkish stance, it first wants to see a sustained period of improvement in inflation.

And achieving this goal will require a sustained period of below-average economic growth, weakening labor markets, and financial pain for households and businesses.

This is the cost of dealing with inflation. And failing to deal with it today will only mean a bigger problem tomorrow.

So if it hasn’t been clear in the past, it should be now: The Fed is pushing the economy into a recession to curb inflation.

The Fed is very clear in what it’s going to do. And what it wants to see before it changes policy from hawkish to dovish.

So you’ll want to take a conservative approach to your investments.

This includes holding more cash than you might normally. And only adding to quality positions you feel confident will perform well over the long term.

Now, I know telling you to hold cash when inflation is at its highest levels since 1981 sounds crazy. Over the long term, inflation erodes the buying power of your dollars.

But the fact is, losing a small amount of purchasing power on your cash in the short term is better than losing half of your investment overnight on risky assets.

Plus, holding cash will allow you to buy discounted assets you’ve been looking to add to your portfolio when we see another drop.

Once the Fed signals it’s nearing the end of its tightening policy, a new bull market will begin. And those who buy quality assets and be patient will be rewarded.

Look, I know it’s hard to see the light at the end of the tunnel right now. But we’ve been here before.

An endless number of opportunities will present themselves over the next few months. So, you’ll want to have plenty of cash to take advantage when they come.

In fact, this past Wednesday, Daily editor Teeka Tiwari went live on air to unveil the best opportunity he sees today…

He showed how investing $250 each in five small cryptos can not only beat today’s 8.3% inflation… but also position you to earn over $10,000 in monthly crypto income.

All you have to do is buy and hold.

You can watch a free replay of Wednesday’s event here… and you’ll even get the name of Teeka’s No. 1 crypto of the five.

But be sure to watch it soon… This replay won’t be online for long.