Ever since the turn of the century, when the market crashes, the Federal Reserve comes to the rescue.

We saw this after 2008, when the Fed slashed its key interest rate to zero and pumped $3.6 trillion into the economy during the Financial Crisis.

The stimulus sent the markets 133% higher over the six years.

In 2020, the Fed again cut rates to zero and dropped another $4.6 trillion worth of helicopter money on the economy during the depths of the COVID-19 pandemic.

The market rallied 101% over the next two years.

Right now, we’re paying for that helicopter money in the form of record-high inflation.

According to the Consumer Price Index (CPI) – a widely used measure of inflation – prices for consumer goods increased 9.1% in June compared to the same month last year. That’s the highest yearly increase since 1981.

To combat inflation, the Fed must now pump the brakes on its stimulus spending and rate cutting. In other words, instead of playing hero, it’s now the villain.

Since the start of 2022, the Fed has turned off the river of money flowing into the economy by raising rates and reducing its balance sheet.

As you can see in the chart below, the market has crashed as much as 24% since the Fed signaled it would start tightening. 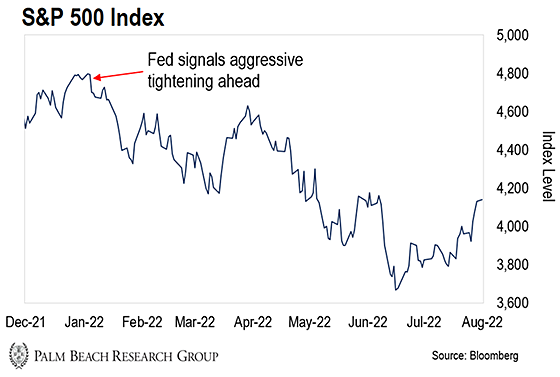 Despite the hawkishness of the Fed, the market believes it’ll once again don its hero cape and restart the gravy train.

But I don’t think the Fed is ready to pivot from villain to hero just yet. In fact, it may inflict more pain on the economy before it switches roles.

Below, I’ll explain why the market could be wrong about the Fed’s next moves… and how you can prepare your portfolio no matter what happens next.

Last week, the Fed hiked interest rates by 75 basis points for the second time in a row. It’s the most aggressive tightening since the 1980s, when it hiked rates to 20%.

The Fed needs to raise rates to rein in inflation. But if it raises rates too much, it will send the economy into a tailspin and crash the markets even more.

Last week, he noted that combating inflation now would be costly… But failing to deal with inflation today only raises the cost of dealing with it later.

Powell wants to bring inflation back down to the Fed’s target rate of 2%. But as you can see in the chart below, inflation is running more than four times higher than his goal. 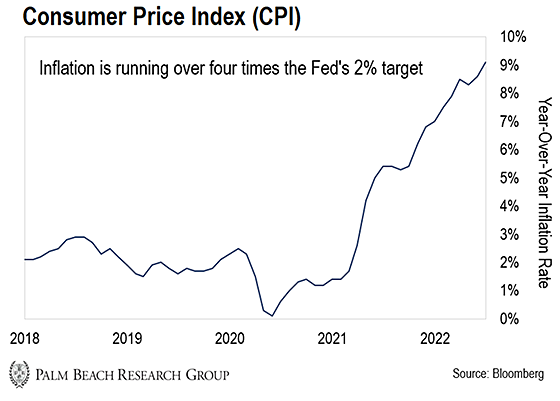 You don’t need a PhD to realize additional tightening is needed to bring inflation lower.

That’s why I believe those who are betting the Fed will pivot and stop its aggressive tightening policy could be painfully wrong.

In addition to the Fed’s rate hike, we also got the highly anticipated second-quarter GDP (gross domestic product) report. And it wasn’t pretty.

GDP is a broad measure of overall domestic production. It’s essentially the scorecard of our nation’s economic health.

In this case, the market saw “bad” news as “good” news…

In other words, the market believes the Fed might take its foot off the brakes sooner than expected before it causes more damage – leading to a prolonged recession.

Today, markets are pricing in only three more rate hikes before the Fed pivots and begins cutting rates in the spring.

But what if they are all wrong? What if inflation persists and more stimulus never comes?

If you have some capital you’re looking to deploy in equities, Teeka suggests you invest in thirds to limit your risk. Here’s why…

The Fed has a history of overdoing things. It either eases rates too much, or it tightens rates too much. If it decides to play “villain” and try to shock the market with back-to-back 75-basis point raises – or even a 100-basis point hike – I want to have plenty of dry powder available to put to work at lower prices.

Remember last year when inflation was running out of control? Everyone could see it. Yet, the Fed dismissed rising inflation as “transitory.” It was off by a country mile and got behind the eight ball. It had to institute the biggest rate hike we’ve seen in 28 years to catch up. And we’re all feeling those effects now.

That’s why I’m being cautious with my capital.

So as Teeka said before, you can invest a third of your capital now… a third if the Fed doesn’t raise more than 50 basis points at its next meeting in September… And the final third after that… if the Fed says it won’t raise rates anymore this year.

If the Fed signals it’s done raising rates (or will cut rates), we’ll see equities take off. So it’s worth it to wait.

As for crypto, we recommend patience, too.

We just saw $2 trillion in value evaporate from crypto markets over the past eight months. And while it’s tempting to want to time the bottom, we expect more volatility ahead here as well.

In the meantime, we suggest you hold a larger cash allocation than normal.

Now, I know telling you to hold cash when inflation is at its highest levels since 1981 sounds crazy. Over the long term, inflation erodes the buying power of your dollars.

So why am I recommending holding more cash?

The Fed can’t afford to risk higher inflation. And as Powell said last week, failing to deal with inflation today only raises the cost of dealing with it later.

If that’s the case, the “easy money” withdrawal symptoms have yet to fully kick in.

Like a drug addict, the market is addicted to easy money. If it doesn’t get its fix of stimulus, it’ll get ugly in the near term.

If the Fed remains hawkish longer than the markets are pricing in, we’ll see more selling in the coming months before the markets start to form a bottom.

That’s why I recommend you sit on some extra cash. You’ll have a chance to scoop up blue-chip stocks and world-class assets like bitcoin on the cheap.

Eventually, the Fed will put on its hero cape again and come to the rescue. When it restarts the gravy train, we’ll see asset prices rally to new highs.

Until then, though, I urge patience until we get a better idea of where the Fed is headed on interest rates.

As Teeka says, let the prices come to you.

P.S. When investing in stocks and crypto, patience is the name of the game right now.

But recently, Teeka identified an “Anomaly” that’s hitting the market that can give you the opportunity to make crypto-like gains from boring, blue-chip stocks.

And he’s developed a strategy to take advantage of this “Anomaly” for the chance to capture 21 years of market gains… in as little as 90 days.

That’s why recently, he held a special briefing on this “Anomaly”… and how there’s still time to profit off it. You can watch it right here.

But make sure you act quick. This replay won’t be available much longer.