Now, it doesn’t take much for bitcoin and crypto critics to declare the end of crypto… so when bitcoin fell below $18,000 for the first time in years, you can imagine what happened.

It was once again the death of bitcoin as we know it… and the fifteenth declaration of bitcoin’s demise in 2022, according to Bitcoin Obituaries.

In the three months since, bitcoin has hovered around the low $20,000s… and it’s been declared dead six more times.

Now, regular Daily readers know that these headlines aren’t anything new… we see them all year long, regardless of where crypto prices move.

And the articles rarely touch on anything more than price action, clueless quotes from people like Elon Musk or Warren Buffett, or the author’s personal feelings about crypto.

So today, I want to make a case for crypto’s longevity… and give you evidence-based reasons why we’re bullish about crypto’s future.

Regarding this metric, it’s important to take a step back and look at crypto over the long term…

When you do, you get an idea of how much the market has grown over the last three to four years.

For example, there are over 300 million crypto users today… That’s a 10x increase from the roughly 30 million users at the end of 2018.

This user base is also spread out across the globe… Roughly half of those users are in Asia, and there are users in every country.

As you can see from the chart below, crypto usage – as measured by long-term crypto trading volumes – continues to grow.

Sure, volumes are not at all-time highs right now… But that’s missing the bigger picture. 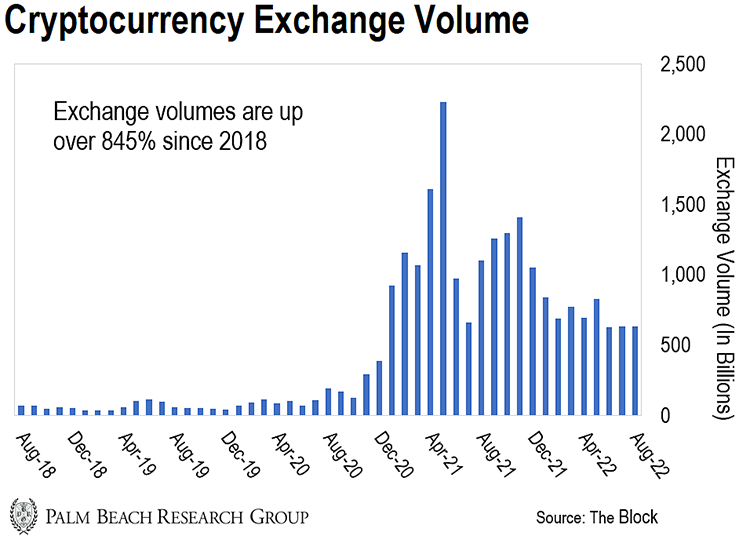 Overall, exchange volumes are up over 845% compared to this time in 2018. That’s healthy growth and usage.

Another useful way to look at usage is to focus on bitcoin’s “on-chain” volume… or how much BTC moves to exchanges from things like crypto wallets.

This gives us a true read of activity on the bitcoin network.

And as you can see in the chart below, bitcoin’s on-chain volume has increased 551% since 2018… 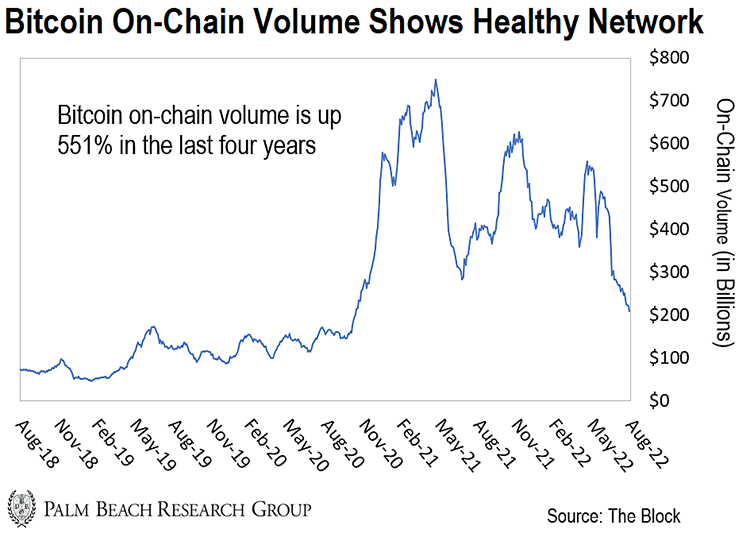 Yes, the last two months have been slow…

But keep in mind that Ethereum’s recent Merge (officially completed this past Wednesday) has diverted a lot of activity away from bitcoin right now, and that the volume is still well above previous years.

Bottom line: Adoption and usage are the most important metrics for determining whether crypto is dying or thriving… And these numbers prove that its future is bright.

Institutions provide VC funding to crypto entrepreneurs and startups to help them expand a product or business.

These early-stage projects can’t go public and seek funding from retail investors… And VCs are adept at profiting from investments in high-risk sectors.

In 2021, venture capitalists invested over $33 billion into crypto and blockchain startups… an industry record, and 4x the funding in 2018. 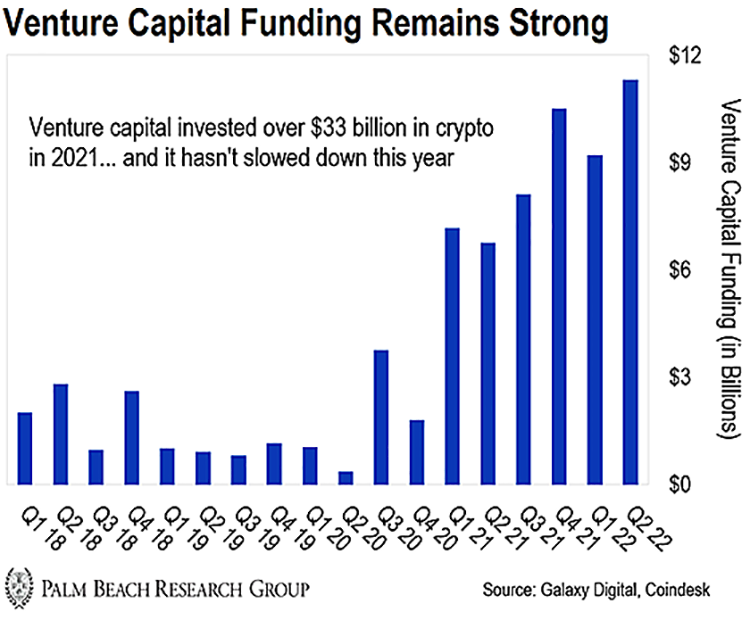 Keep in mind, the Q2 number is the most recent data available to us… but VC funding remains strong in 2022, despite extreme volatility.

And those numbers don’t include recent news… like the creation of a $4.5 billion crypto fund from VC firm Andreessen Horowitz.

Andreessen Horowitz likens the long-term opportunity in crypto to “the next major computing cycle,” after PCs, the internet, and mobile computing…

We believe crypto represents the next era of computing, and the top VCs realize that now is the time to take advantage of this shift.

The third reason to remain bullish is Web 3.0.

Web 2.0 is the version of the internet we know today… and while Web 2.0 enables lightning-fast interaction and engagement on a global scale, it isn’t without problems.

First, there are internet gatekeepers like Amazon, Facebook, and Google… These companies not only have control over what we see online, they’re constantly tracking and storing our personal info.

The current internet model also largely relies on centralized servers and protocols. That creates centralized points of failure that malicious actors can target.

But Web 3.0 is designed to solve these problems…

It enables decentralization and user control of personal data via a multi-chain network… so multiple blockchains work together with no primary gatekeeper or point of control.

And although some in the media are quick to write it off as a fad, interest continues to surge, according to Google…

Google measures search interest on a scale of 1–100 relative to its peak popularity. A value of 100 is when the term was most popular. A value of 50 means that the term is half as popular as it was at its peak.

Over the last seven months, search interest in “Web 3.0” has been consistently high. Take a look… 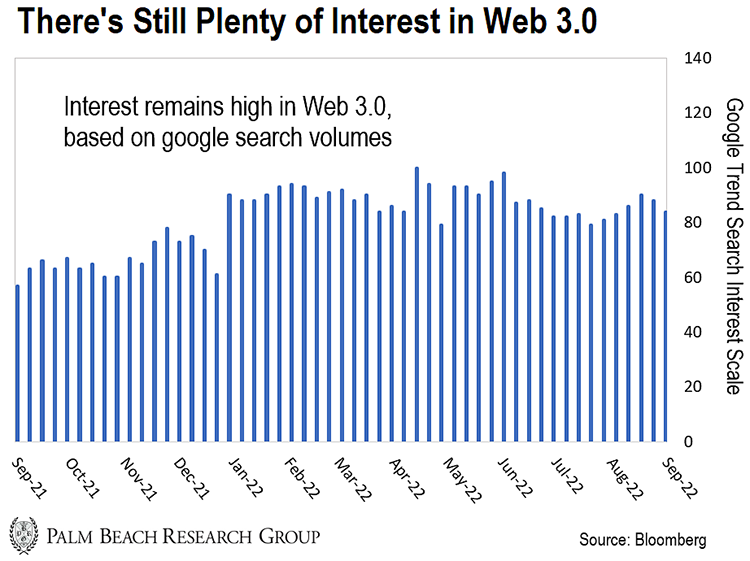 There’s also an increase in Web 3.0 funding and usage when you measure the growth of Decentralized Finance, or “DeFi.”

DeFi is a broad category of financial applications developed on open, decentralized networks… and it has the potential to be even bigger than the traditional finance sector.

And usage of decentralized exchanges remains strong too… 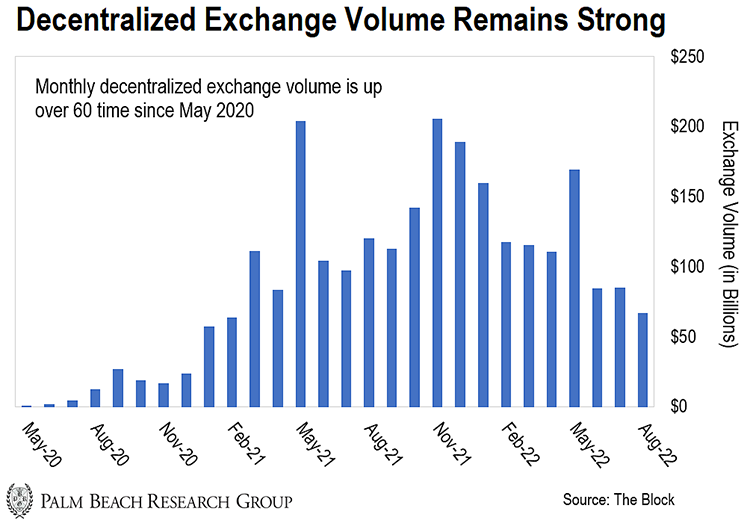 As you can see in the chart above, monthly decentralized exchange volume is up 6,089% since May 2020.

This shows that Web 3.0 is more than just a marketing line… It’s a massively growing industry.

Bullish Indicator No. 4: The Merge

The fourth reason to remain bullish on the cryptocurrency market is “The Merge”… that’s the name for the next evolution of Ethereum that was officially completed two nights ago.

I don’t want to get into the weeds, but here’s a brief explanation…

We’re about to see a major reduction in ETH’s incoming supply, thanks to the Merge.

This is when Ethereum transitions from a Proof-of-Work (PoW) protocol to a Proof-of-Stake (PoS) protocol.

With PoS, miners validate transactions by staking tokens on the network, and the network determines who receives the award.

This creates scarcity by reducing the incoming supply of tokens… and scarcity increases the token’s value.

Ethereum just completed the switch to PoS on Wednesday night… and if all goes according to plan, we’ll see as much as a 90% reduction in the amount of new ETH coming to market.

So after the Merge, there will be fewer tokens in circulation – making each more valuable.

Plus, our research suggests vast amounts of money on the sidelines waiting for Ethereum to complete its Merge…

Institutional money managers are getting a lot of heat from folks demonizing proof-of-work because of its energy-intensive nature.

A move to proof-of-stake kills that argument and clears the way for further investment.

The other consideration is that institutional money managers don’t like risk. It’s far safer for them to wait until Ethereum’s move to PoS is complete…

So the good news is that the wait is finally over.

The Long Term Is Still Bright for Crypto

The crypto markets are just brutal right now… And we could be in tough times for the foreseeable future as markets cope with hawkish monetary policy and myriad other issues.

Early investors of tech stalwarts such as Apple and Amazon went through drawdowns of 80% to 90%.

Those losses threw doubt into those companies as investments… But both continued to innovate and build and are now worth trillions.

Crypto is no different.

It’s been here before, and it’s come back stronger every time to reward those who stuck around.

So as Daily editor Teeka Tiwari said, “Stay the course.”

When crypto goes mainstream, the gains will be massive.

P.S. As I showed you above, there are more than a few reasons to be bullish about bitcoin’s prospects in the months ahead…

But Teeka has identified another crypto catalyst that has him extremely bullish about bitcoin for the first time this year.

It has nothing to do with Ethereum’s Merge or a bitcoin halving… and all but the heaviest hitters in finance are even talking about it right now.

But investors that prepare for it ahead of time could have a shot at collecting a five-figure monthly income from just a handful of crypto investments.

This will be Teeka’s first LIVE crypto event of the year, so you don’t want to miss it.