Nick’s Note: Regular readers know that we’re no fans of Tesla. The company is feeling plenty of heat from competition in the electronic car space. We don’t know who’ll come out on top… But my colleague, Casey Daily Dispatch editor Justin Spittler, says there’s one idea that will profit no matter who wins the electric vehicle race…

“Has Elon Musk lost his mind?”

A friend of mine sent me this text message last week. It included a link to the article below from The Wall Street Journal. 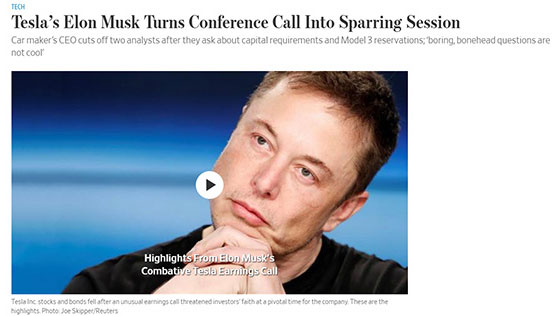 You can read that article here if you’d like. But it’s not necessary. I’ll tell you what happened.

Last Wednesday, the electric vehicle (EV) maker Tesla had its earnings call. On the call, analysts asked questions about the company’s financial results, plans, and operations.

But CEO Elon Musk was in no mood to answer tough questions. In fact, he said this after one analyst asked about the company’s capital requirements (i.e., if Tesla would need to borrow money again):

Boring, bonehead questions are not cool—next.

Musk then took softball questions from a YouTuber who basically worships the ground he walks on. In short, Musk had no interest in answering difficult questions. But he was more than happy to answer questions that weren’t “boring.”

Some people said this was unprofessional… Other people thought it was awesome.

But the market wasn’t too pleased with Musk’s antics.

The sell-off wiped $3 billion off the company’s market value.

But that wasn’t even the worst thing that happened that day. You see, Volkswagen dropped a bombshell just a few hours after Tesla’s earnings call.

Volkswagen, as I’m sure you know, is one of the world’s biggest carmakers. That makes it one of Tesla’s biggest competitors.

Of course, many people don’t think of Volkswagen this way. And that’s because the German carmaker is best known for making traditional vehicles that run on gasoline.

By 2025, it hopes to sell as many as 3 million EVs. Eventually, it aims to have the “world’s largest fleet of electric vehicles on the road.”

That’s an ambitious goal. But Volkswagen is putting its money where its mouth is. In fact, it announced last Thursday that it will order 40 billion euros’ (about $48 billion) worth of EV batteries. That’s twice as much as the giant carmaker planned to order two weeks ago. It’s also more than Tesla’s current market value.

This is a huge deal.

It’s not the only major car company that’s reinventing itself, either. Ford, Jaguar, and even General Motors are going “all in” on EVs.

In short, competition is heating up in the EV space.

That’s great news for people all over the world. It means they have more choices when it comes to EVs.

But this is bad news for Tesla. After all, these companies have the money, talent, and production capacity to go toe to toe with Musk.

But I didn’t write this essay to tell you why I’m bearish on Tesla.

I wrote it because Volkswagen’s big announcement confirms what I’ve been saying for months.

And you can turn this megatrend into fat profits. And no, it’s not by investing in Volkswagen or any other carmaker.

The opportunity I’m about to share with you has much more upside… and is much safer.

Now, most people don’t think of copper when they think of EVs…

But it will play a massive role in this revolution.

You see, the average electric car requires 330 pounds of copper.

That’s four times as much copper as a conventional car requires. An electric bus, on the other hand, can require as much as 814 pounds of copper.

This is because copper goes into the engines, windings, and cables that make up EVs. It’s even in their lithium-ion batteries.

And that’s just the vehicles. Each charging station (which you can think of as gas stations for EVs) requires between 1.5 and 17 pounds of copper, depending on its charging speed.

So consider speculating on copper if you haven’t already.

You can do this by buying the iPath Bloomberg Copper Subindex Total Return ETN (JJC), which tracks the price of copper.

You could also speculate on copper miners. These companies are leveraged to the price of copper. So copper doesn’t need to rise much for these stocks to skyrocket.

Just remember that mining stocks are highly speculative, so treat them accordingly. Only bet money you can afford to lose. Use stop losses. And take profits as they come.

Investors who follow these steps will set themselves up for big gains without exposing themselves to big losses.

P.S. Casey Research’s resource guru, Dave Forest, has multiple ways to play the upcoming boom in copper in his International Speculator portfolio. These companies have huge upside today—and are still in buy range.

And Dave says that copper isn’t the only industrial metal that will skyrocket from the EV revolution. Right now, he has exposure to the other key metals from this trend… ones still under the radar today. You can learn more about these metals—and the best way to profit—with a risk-free trial to International Speculator. Click here to learn more.

Master trader Jeff Clark says the biggest moneymaking opportunity he’s seen in nine years is barreling our way. It will stay open for a short period (somewhere between 20 days and five months). 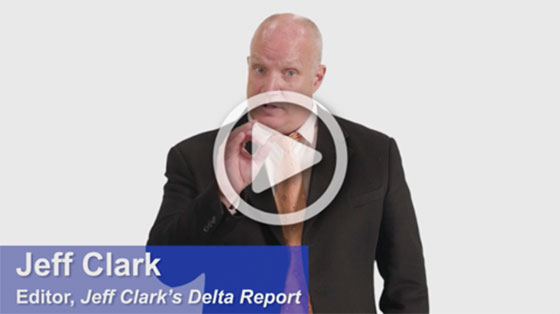