In yesterday’s Daily, I wrote to you about how rampant government spending and money printing are driving inflation higher…

And how inflation-busting Maverick Investments, like collectibles, should be a key piece of a well-diversified portfolio.

Today, I’ll share my own experience with collectibles… and even provide you with an easy way to start investing in them right now.

Because as I showed you yesterday, persistent inflation isn’t going away anytime soon… and unless you rethink how you invest, your financial future could be at risk.

I first started investing years before I bought my first stock. I just didn’t know it.

That’s because, like many of today’s ultra-high net worth individuals, I gravitated towards collectibles.

In my case, it started with a coin collection.

I went through my parent’s old change to fill coin books. And I often cashed in my weekly $5 allowance at the local coin store to fill in my collection.

I offered to sort through change for family and neighbors.

I charged by the roll, organizing and sorting, including wheeling hundreds of pounds of coin rolls to the bank to exchange for paper cash.

My days as a one-man Coinstar didn’t last long… But it allowed me to fill up a portfolio of old silver coins.

But they were generally worn-out coins of common dates. For the ultra-rare coins, it took until adulthood to buy them outright.

It wasn’t until my 20s that I finally finished one of my favorite coin sets, the Mercury Dime. 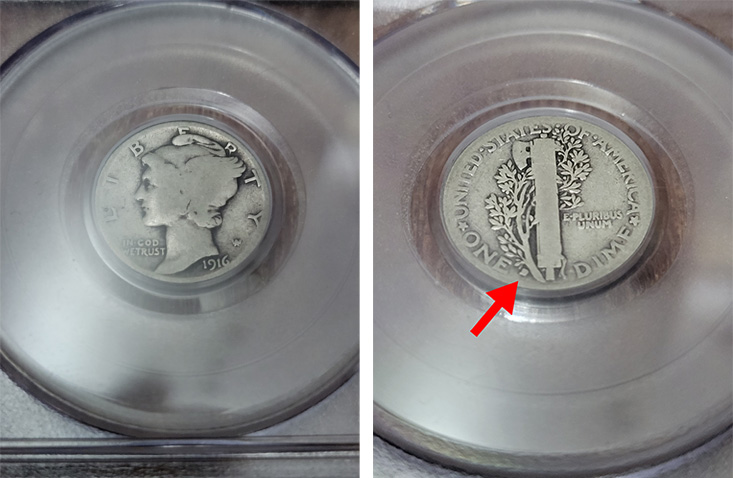 From the author’s collection.
The red arrow indicates the “D” mark mentioned below.

The story goes that the Denver mint was understaffed, as teams there were sent to Philadelphia and San Francisco to work on other coin designs coming out around the same time.

As a result, the U.S. only minted 264,000. That’s in contrast to over 10 million coins in San Francisco and 22 million in Philadelphia that year.

In fact, because the Philadelphia mint doesn’t leave a mint mark, fraudsters will shave off the “D” mark (indicated by the red arrow) from another Denver mercury dime to make forgeries.

Today, the latest price guide gives me an estimated $1,500 value. Not a bad return for simply holding onto a tiny disc of silver for a decade.

But if that same coin’s grade were 66 out of 70 – the highest-known level – it would be worth $45,000. And, based on the price guide, it would have nearly doubled in the last decade.

To me, that’s the real secret of investing in alternative assets like collectibles…

How to Get Started

Finding something rare, real, and enduringly desirable is key when looking for a Maverick Investment.

But if you want to add collectibles to your Maverick Investment portfolio, you have to buy the top of the line… because scarcity alone doesn’t guarantee quality or future value.

A decade ago, if I wanted to buy the best-known example of a rare coin, I had to buy it myself… Or bring together other interested parties to make a deal.

Forking out that much money for a coin might not be an issue for the wealthy… but what about the average investor?

The good news is that the collectibles market has become increasingly accessible over the last few years.

Today, you can simply buy a fraction of a prestige collectible using various platforms…

Certification and storage are covered. And you can sell the asset in a few years for a market-beating profit.

Otis is one platform perfect for investing in collectibles at a low starting cost.

It’s a fractional investing platform that we first mentioned in the March 2022 Palm Beach Letter issue. In that issue, Otis was a play on how to invest in the highest quality NFT projects.

The Otis platform has more than 100,000 users. That places it second to Rally among general collectible ownership platforms.

And while it doesn’t offer rare coins, you can find a wide range of assets besides NFTs… from baseball cards to video games, rare sneakers, and even art.

An independent auditor makes sure Otis owns the assets on its platform. The company also hosts pop-ups and other events that allow people to see assets at a dedicated gallery space in New York City.

Each asset on the platform has been securitized by the SEC and broken into shares… And there are both “primary” offerings (like an initial stock offering) and assets trading on the platform’s secondary exchange.

That offers a chance to buy into fully-funded collectibles or cash out if you need the liquidity down the line.

The average age of the investments before a sale was 323 days, and the total average return was 50.6%… and several Otis’ offerings have even delivered triple-digit returns.

If you’re looking for a way to diversify your portfolio, potentially beat the market, and outpace inflation… you’ll be hard-pressed to find a better Maverick Investment than collectibles.

Click here to check out the latest offerings from Otis.

P.S. Collectibles aren’t the only way to beat inflation today…

That’s why Daily editor Teeka Tiwari recently told readers about a crypto catalyst that has him extremely bullish about bitcoin for the first time this year.

And investors that prepare for it now could have a chance at collecting a five-figure monthly income from just a handful of cryptos.

You can watch a replay of Teeka’s event right here… but do it soon.

This catalyst has been triggered, so the video won’t be online much longer.