Since the beginning of the year, I’ve warned you to buckle up for a rollercoaster ride in the markets…

I’ve told you that record-high inflation… interest rate hikes… and geopolitical uncertainty would lead to a “cyclical” bear market.

And that’s come to pass. We’ve seen the broad market drop 24% and the crypto market drop 72% at its trough.

If you’re unfamiliar with market cycles, there are two types: Secular and cyclical.

Within these secular markets, we also have shorter “cyclical” markets. They can last from three to 18 months.

But for the first time this year, I feel cautiously optimistic in the short term. 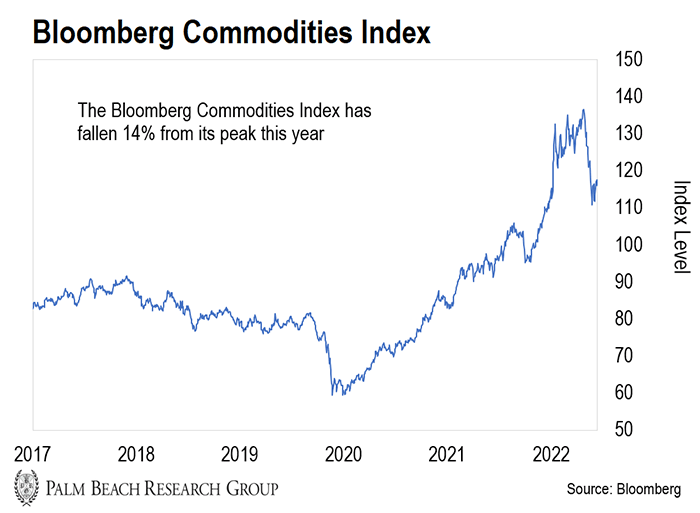 Indeed, commodity prices across the board are down, too.

This suggests to me that inflationary pressures are easing. In other words, we may have hit peak inflation in June.

I know that may seem insane when prices at the pump and grocery store still put a crimp in your pockets. But the CPI is a “lagging” indicator.

It shows what prices were the previous month, not what they will be in the next month.

Now, I’m not saying the inflation rate will return to normal of about 2% per year.

As I’ve written recently, we’re in a New Reality of Money. In this new reality, inflation will continue to erode the value of the U.S. dollar for years to come.

For now, it looks like inflation may have peaked in June – at least in the short term.

That’s good news for the markets.

All Eyes on the Fed

If commodities are slumping, I expect the Federal Reserve to move from a “hawkish” stance on inflation to a “neutral” stance.

A “neutral” stance means the Fed will take no action. And for the markets, “neutral” means accommodative.

On July 6, the Fed signaled it plans to raise interest rates another 75 basis points. That hike is already baked into the market.

The next Fed meeting after that is in September. If inflation continues to ease, then I believe the Fed will either shift to a neutral stance or just hike 25–50 basis points.

I think anything at 50 basis points or lower will be greeted with extreme optimism by the market.

I’m not saying the Fed will cut rates. I am saying it’ll likely be done with all its rate hikes before the year ends. And that will spark a massive rally.

The first sector to rally will be blue-chip dividend stocks.

When people realize rates are done going up… there will be a mad dash for blue-chip dividend yield. Many of which are trading with dividends over 4% right now.

The Fed’s shift to a neutral stance will also cause bond yields to decline… so the yields on blue-chip dividend stocks (which rise over time) will look mighty juicy.

Be Prepared, But Be Cautious

To take advantage of this potential move, I’m deploying my capital to blue-chip dividend stocks in thirds:

So why am I deploying my capital in thirds?

If the Fed doesn’t move to a neutral stance… I want to keep most of my capital parked on the sidelines until we get more visibility on rates.

If it decides to play “hero” and try to shock the market with back-to-back 75-basis point raises – or even a 100-basis point hike – I want to have plenty of dry powder available to put to work at lower prices.

Remember last year when inflation was running out of control? Everyone could see it. Yet, the Fed dismissed rising inflation as “transitory.”

It was off by a country mile and got behind the eight ball. It had to institute the biggest rate hike we’ve seen in 28 years to catch up. And we’re all feeling those effects now.

That’s why I’m being cautious with my capital.

Now, I understand everyone doesn’t follow the markets as closely as I do. So you may be unable to deploy your capital in thirds based on the Fed’s policies.

That’s why I want to share another strategy I’m using to generate decades’ worth of gains from blue-chips stocks during this market downturn.

It all has to do with a rare phenomenon I call an “Anomaly Window.” And it has enormous implications for investors.

During Anomaly Windows, boring blue-chip stocks can see decades of gains in just a few weeks.

And the Fed’s recent actions are creating the biggest Anomaly Window I’ve seen since 1994.

It’s one of the few opportunities to make asymmetric gains from conservative companies… And right now, we’re nearing one of the largest Anomaly Windows I’ve seen in 28 years.

My team has made a fortune for our readers by taking advantage of Anomaly Window events.

That’s the power of using the right playbook to invest during Anomaly Windows. You could potentially recapture 20 years of S&P 500 returns in as little as three months.

Right now, I’m using this strategy with my own money to generate annualized returns of as much as 60%.

Thousands of online viewers learned all about the Fed Anomaly… how Wall Street has used these Anomalies to make billions at your expense… and how you can use them to capture decades of market returns in three months or less.

During the briefing, I even shared the stocks I’m using to take advantage of the next Anomaly Window… absolutely free… with no strings attached.

If you don’t have the right playbook to take advantage of this Anomaly Window… you’re either going to cower in fear… or you’ll wait until it’s too late and buy at the top.

Using my Anomaly Window playbook can put you in a position to take maximum advantage of the next window… in a way you won’t hear anywhere else… controlling the level of risk in a way you’ve never seen before… and using a strategy that’s been right for my subscribers 97% of the time.