Nick’s Note: Regular readers know our subscribers have made life-changing gains investing in the cryptocurrency space. But if you’re inexperienced with cryptos, you can get burned easily. That’s why today, we turn to colleague Jeff Brown, editor of Exponential Tech Investor.

Like PBRG’s world-renowned crypto expert Teeka Tiwari, Jeff is an expert in blockchain technology. His specialty is finding highly profitable initial coin offerings (ICOs)… which are blockchain versions of initial public offerings (IPOs). We believe you’ll find Jeff’s research about the ICO space to be valuable…

I saw them at every cryptocurrency conference I attended…

They had booths… presentations… and a flashy website… The company reps even seemed like nice enough guys.

But I took one look at the digital token they were promoting and knew it was a fraud.

The company I’m referring to is BitConnect. The digital token associated with the company trades under the crypto ticker BCC.

BitConnect marketed itself as a cryptocurrency exchange and lending platform. 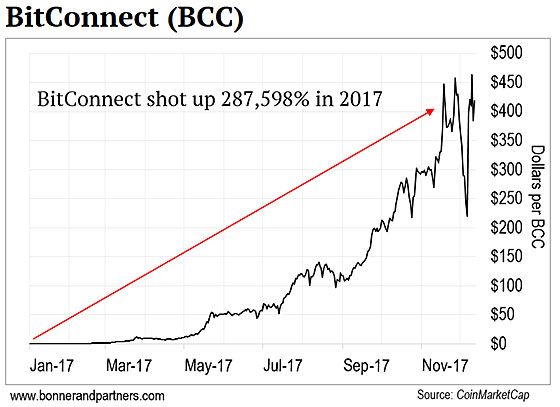 Impressive returns… but I didn’t recommend it to my readers. In fact, in November 2017, I explicitly recommended that my readers NEVER buy BitConnect.

You see, BitConnect would invite people to trade their bitcoins for BitConnect coins. The company would then turn around and lend the bitcoins out, with the investors collecting interest.

When digging deeper into the frequently asked questions on the website, I discovered information concerning the “BitConnect Investment Opportunity.” There, you can read that “the moment you acquire BitConnect Coin, it becomes an interest-bearing asset with up to 120% return per year through PoS [Proof of Stake] minting.”

I told my readers in November, “This is the equivalent of a Ponzi scheme, short and simple.”

I’m happy I warned readers to steer clear. Because earlier this year, it happened: The bottom fell out.

Take a look at the updated chart through January…

From its peak of $2.8 billion, the BitConnect market cap sank to $5 million, erasing over $2.7 billion in wealth.

Anyone holding a large amount of BCC has been completely wiped out. To have made money off of this Ponzi scheme, an investor would have needed ridiculously good timing within just a six-month window.

At writing, there are five class-action lawsuits pending against BitConnect. The company’s assets have been frozen.

How to Spot Cryptocurrency Scams

Amidst all of the incredible investment opportunities in cryptocurrencies, blockchain companies, and initial coin offerings (ICOs), there are certainly ones to completely avoid as well.

Late last year, I wrote about how the run-up in cryptocurrencies was similar to the rally in internet companies in the late ‘90s.

Just like the dot-com bubble, there is fraudulent behavior. Some of these scammers are hoping to take advantage of the hype in the industry.

Here are a few things to look out for to make sure you don’t get caught up in a cryptocurrency scam.

Red Flag No. 1: Who Is Backing the Project?

Before you invest in any cryptocurrency, ask yourself, “Who is behind the project?” Do they have any experience with blockchain technology and cryptocurrencies or digital assets? Are there any reputable advisors on the team?

Recently, a company called AriseBank hosted an ICO. An ICO is similar to an IPO. Except, instead of receiving stock in a company, investors get digital tokens associated with a blockchain company.

But a simple Google search would have revealed that one of the principals, Jared Rice, is a well-known fraudster. That’s an obvious red flag for me. I always review the backgrounds of key executives and advisors as a step in analyzing any ICO.

While not fraudulent or illegal, using a celebrity’s reputation to promote an investment opportunity is also a huge red flag for me.

In the case of AriseBank, world boxing champion Evander Holyfield was associated with it and was supportive of the ICO. Any time I see a celebrity endorsement, particularly those coming from individuals who have no understanding of the technology and business, it is an immediate indication that something isn’t quite right.

The best blockchain projects would never associate with a celebrity. They just don’t need to pursue those kinds of marketing tactics… The projects’ merits should speak for themselves.

Red Flag No. 3: Does the Project Have Community Backing?

A successful blockchain company isn’t created in a vacuum. It requires communication, cooperation, and participation with developers and the cryptocurrency community at large.

To use AriseBank as an example once more, there was no community built around the project. I couldn’t find any teams in the community that were working on its technology or partnerships.

To make matters worse, there were no regulatory filings associated with the company. And this is a financial institution claiming to have acquired a 100-year-old bank… There must be filings.

As you may have guessed, AriseBank is precisely the type of investment I would recommend you avoid at all costs.

And it will come as no surprise to learn that the Securities and Exchange Commission (SEC) has frozen the company’s cryptocurrency assets and considers the ICO a fraud.

When investing in cryptocurrencies, digital tokens, and initial coin offerings, it’s essential that investors perform due diligence to eliminate the risk of investing in projects that have obvious red flags with the potential for outright fraud.

Without doing so, investors are just gambling, and almost asking to lose all their money.

Yet, by performing the necessary analysis, investors can ensure that their investments are educated speculations in solid projects that have the potential for tens of thousands of percent returns.

P.S. Part of my research service, Exponential Tech Investor, is dedicated to finding and vetting the best of the best ICO projects in the market. These are the projects that will deliver 100x returns in the years ahead.

My readers have had the chance to invest in four of these ICOs already, with several more popping up on my radar in just the past few days.

You can learn more about how I personally vet these projects, and how to get a few promising names in your portfolio, right here.