For the last eight months, I’ve been conducting an in-depth research project. I’ve been quiet about it because I didn’t want to tip my hand too early.

But the conditions have finally come together…

You see, it’s time to strike on a red-hot sector right now. It’s finally making it into the mainstream.

I’m talking about gold—and what I call its “stealth bull market.”

Now, the gold sector blasted onto our radar last September when industry leader Barrick Gold announced an $18 billion mega-merger with one of its main competitors, Randgold Resources.

This announcement was like the starter pistol going off in a race. Since this deal, we’ve seen a cascade of mining merger plays…

Following this, Barrick attempted an $18 billion hostile bid to buy Newmont. And we’ll only see even more of these types of deals in the coming months.

So in today’s essay, I’ll share with you the strategy we’re using to profit from this money-making trend. But first…

Gold Is Getting a Boost

Mining deals are on the rise for two primary reasons: supply and price.

In terms of supply, miners have been locked in a brutal bear market since 2011. With the price of gold falling 44% peak to trough, companies had to rein in exploration budgets.

But they also had to keep producing gold and silver to pay the bills—which is where the problem lies.

You see, as a company mines its resources, it taps into a dwindling asset base. To replace these assets, it must make new discoveries or turn to mergers.

Exploring for resources is a tough, risky business, though. So large players would rather buy proven deposits. It’s easier: Let the exploration companies do all the hard work, then just show up with a check.

Now, it makes the most sense to buy out well-run miners when the price of their assets is rising. And that brings me to the second reason mining deals are on the rise: the stealth bull market in gold.

As you can see in the chart below, gold has outperformed the S&P 500 over the past year: 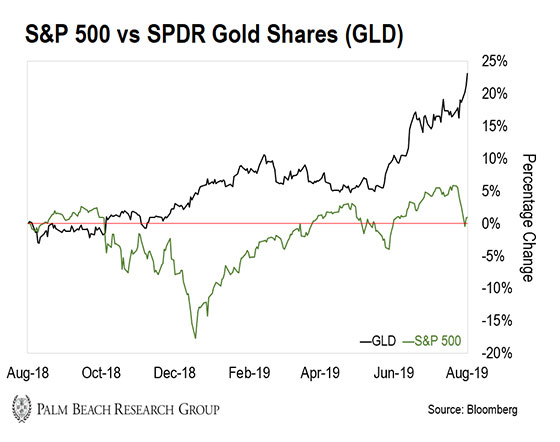 In fact, the price of gold recently hit six-year highs around $1,510 per ounce. And we expect this trend to continue as big players keep buying gold by the truckload.

According to the World Gold Council, central banks purchased a record $15.7 billion of gold in the first six months of 2019. It’s an effort to diversify reserves away from the U.S. dollar as global trade tensions continue.

The council also reported that central banks bought 651.5 tons last year, up 74% from 2017. And according to Citigroup, their purchases could reach 700 tons this year.

All told, global gold sales are on track to surpass 4,370 tons this year—a five-year high.

Plus, there’s another tailwind behind gold. And it all has to do with the U.S.-China trade war…

You see, when you slap a projected $250 billion in tariffs on incoming goods, it’s only a matter of time before those tariffs start showing up as higher prices.

Tie that in with a booming U.S. economy and the tightest labor market I’ve seen in my lifetime… and the stage is set for explosive wage and consumer goods inflation.

This surging inflation combined with negative real interest rates will cause a sharp rise in demand for gold as investors seek a safe haven.

Under this scenario, gold could easily trade at $2,500 per ounce. And this price action will ignite a gold stock rally unlike anything we’ve seen since the early 2000s…

How to Play it

One way to profit from gold is through mergers and acquisitions. New deals are being announced on what seems like a weekly basis.

And to make big gains from this bull market in gold, look for well-run small- and mid-cap miners that are prime buyout targets for larger miners.

The best buyout baits are companies making money hand-over-fist, operating in mining-friendly jurisdictions where property rights are respected and protected.

Remember, mining companies are volatile. So be sure to do your homework before investing.

Another play is adding some exposure to GLD—which does a good job of mirroring the price of gold. And more conservative investors can consider adding a small amount of gold to their portfolios as a chaos hedge (we generally recommend no more than 5%).

In addition to the price gains, gold will also provide you the benefit of “sleep-at-night” protection.