In 2008, Warren Buffett took to the pages of The New York Times with an op-ed entitled “Buy American. I am.”

It was at the peak of the fears surrounding the housing market’s implosion and subsequent credit crisis. It took another five months before the market bottomed.

But today, it holds up as a fantastic read on staying the course… and focusing on buying value when there’s blood in the streets. It’s a worthwhile reread in today’s markets.

History repeats itself. Following big market declines, there’s a lot of skepticism. Growth sectors like tech that were once the “must own” space become toxic.

And that’s when some of the best ideas may sound crazy.

In 2010, investors were still fearful about growth stocks. The first independent financial publisher I ever worked with even shot down my top idea at the time: a little company called Netflix (NFLX).

Netflix was transitioning from mailing out DVDs to offering its entire catalog of content via the internet.

Today, streaming is a household concept. And Netflix is just one of over a dozen players. But in 2010? It was the only game in town serious about making money in that space, fearful markets or not… And it did.

Investors today may not like streaming companies. There’s a lot more competition. And users are more prone to shop around for deals to keep the number of streaming services reasonable.

The point is… when you hear a truly great investment idea, there’s a good chance that part of the reason it’s great is that it’s hated. That’s where the value lies.

Why It’s Time to Search For Hated Assets

Buying underappreciated assets is a core idea behind our work at PBRG.

Being laughed at, or being called naïve, usually means I’m on the right track… relying on solid research rather than blind opinion. It’s a price I willingly pay in the pursuit of spectacular returns.

As you probably know, Teeka has the track record to back that up…

That’s the power of buying hated assets. And right now, there are several sectors where transformative changes are underway… but where it’s also still unthinkable for most investors to buy in.

Even better, that value will likely improve in the year ahead.

That’s because the prices of stocks and corporate bonds will remain under pressure until the Fed stops raising interest rates.

But those who dare to buy the most hated and beaten-down investment plays will win the rebound when the Fed pivots.

Our goal here at PBRG is to share our best ideas with you… even when they sound crazy.

And the most “unthinkable” asset class today? Post-IPO SPAC plays.

Why This “Unthinkable” Space Is Worth a Closer Look

SPACs, or special purpose acquisition companies, had a mini-bubble in 2020–2021.

If you’re unfamiliar, SPACs generally go public at around $10 per share… They then use the cash raised from that IPO to acquire a private company in a reverse merger.

Nearly half of all 700 SPAC deals since the first SPAC in 1993 occurred in just the last few years.

The sector attracted investors following the big gains of early winners like Virgin Galactic (SPCE) in 2019 and DraftKings (DKNG) in 2020.

But the sector imploded last year. Deal flow stopped. And many companies that went public via a SPAC failed to show high growth.

The chart below shows the performance of the AXS De-SPAC ETF (DSPC), an exchange-traded fund that offers exposure to private companies that went public via SPACs. 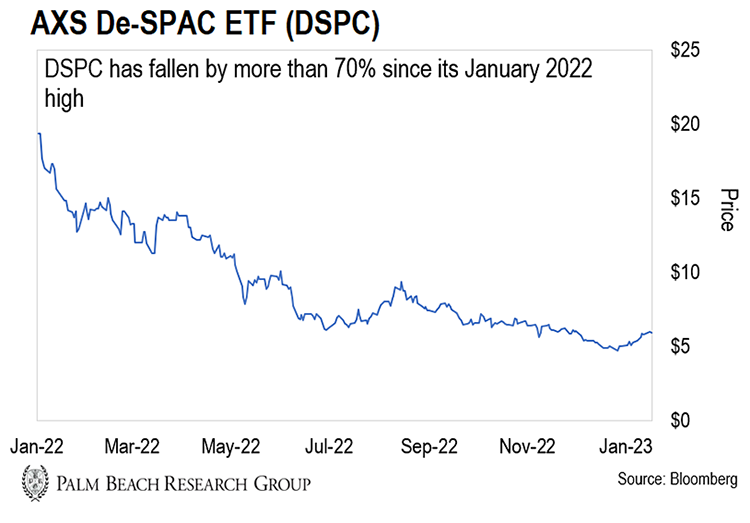 That implosion has changed the perception of SPAC companies in a big way. Investors looking for quick triple-digit gains have been disappointed.

But now, hundreds of companies are trading at a fraction of their IPO price.

Yes, if a company was overvalued going into its IPO, it needs a steep discount to be fairly valued.

And outside of the most competitive sectors in the SPAC universe – like companies related to growing electric vehicle (EV) sales – there aren’t a lot of attractive opportunities left.

Now, I’m not ready to pull the trigger on any SPAC name just yet.

After all, if a company is unloved and cheap but also still in decline… today’s buyers will take a hit.

So for now, the name of the game is patience. That means waiting for cheap and unloved companies to start moving higher.

That may seem anticlimactic, but we need to be ready to act later in the year when we can get some screaming bargains that are finally trending higher.

You won’t need to invest much in these names, as they’ll still be speculations.

However, when the market’s ready to separate the quality names from the garbage, you’ll want to hold your nose and buy.

The fact is, if you’re looking for the next big play… you will want a smaller company.

It will need to show the potential for high growth in the coming years.

A few post-merger SPAC companies are starting to show that potential today… But the timing isn’t quite right.

When it is, we’ll move into the best opportunities.

But much like when Teeka first bought bitcoin in 2016… or when I recommended Netflix to my publisher in 2010… the unpleasant and unthinkable investments are often the best way to grab life-changing, market-beating returns.

P.S. Holding cash and being patient is the name of the game right now… We don’t want to buy undervalued opportunities until there’s a clear uptrend forming.

But if you’ve got some extra cash on the sidelines, there’s a volatility-proof sector of the market that’s outperforming traditional assets…

And it’s one Teeka has watched explode in his own portfolio over the last two years.

It’s not crypto, bonds, or pre-IPOs… and you can get started today for as little as $50.